Organization is very important to me. My wife would likely suggest that I border on the edge of obsession in some realms and my Magic collection is no exception. In addition to the obvious benefits in deck building, having an organized card collection is also important when trading, buying, and selling cards.

Last week I discussed various levels of risks one could take with some categories of Magic cards. These include some [card Underground Sea]"blue chip cards"[/card], [card Land Tax]banned cards[/card] with possibility of becoming playable again, cards with [card Visions of Beyond]latent potential[/card], and cards which grow [card Survival of the Fittest]incredibly rapidly[/card] but are at risk for equally fast decline.

Using this categorization I make sure my collection is organized in a particular way and I have developed a trading strategy accordingly. Let me explain further.

Almost every Magic: the Gathering player has a trade binder – some may even have multiples, including myself. 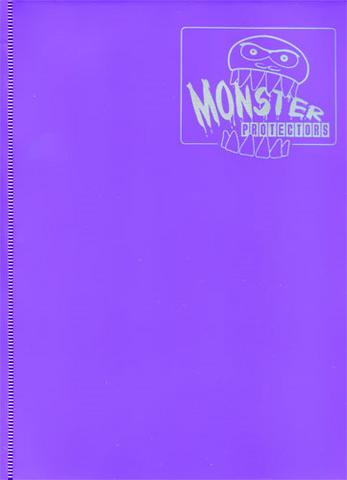 Consider your tried-and-true blue chip cards, for example. These are likely to hold value for an indeterminable length of time with potential for gradual increase. Dual Lands, Fetch Lands, Power 9, Force of Wills and the like should not be haphazardly traded away. Instead I often keep these cards, usually consisting of playsets, in a separate Monster binder the majority of others never get to see.

If these cards were in the front of my trade binder, most savvy traders would recognize these blue chip cards for what they are and easily fixate on them. This has happened to me numerous times before I adopted this strategy. My choices were slim – either trade away my Duals and try my best to obtain value, or tell my trade partner they were not for trade and risk objurgation.

It may be possible for you to earn some value trading them away and at times this is necessary to complete a deck. Still, a number of these cards should form the backbone of your collection, providing you with stability in your portfolio and a ready source of liquidity (easy to trade or sell).

The Front and Back of My Trade Binder

It goes without saying then that being able to trade away cards from the other categories for blue chip cards is often a win. Sometimes, sacrificing small value in these trades is even acceptable because the long term stability of these cards.

For example, I would gladly trade Ravnica Shock Lands away for Legacy Dual Lands. The former may see a reprint for Modern play while the latter are on the Reserved List. The original Modern hype caused these cards to jump significantly in value already and further upside is far from guaranteed. This is especially true since many solid lists are running as few as two or three Shock Lands with a heavier focus on Fetch Lands. 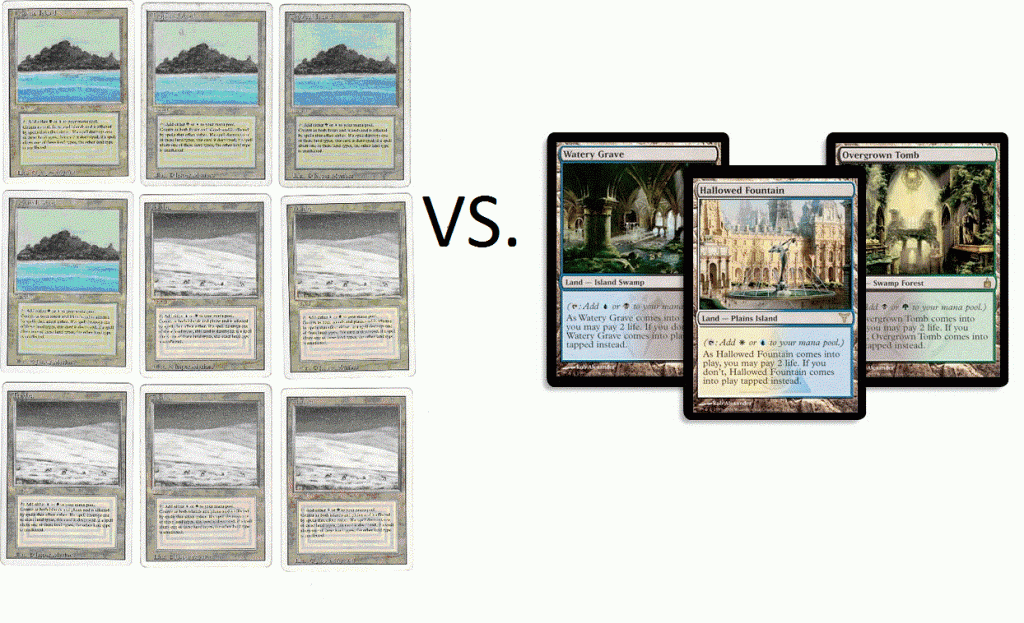 Uncertainty can be a major influence on card pricing, driving fluctuations as people speculate upon bannings, reprints, etc. Grove of the Burnwillows, for example, was a major staple in Modern, but the card's value dropped substantially even before the banning announcement on December 20th. (chart courtesy of blacklotusproject.com). 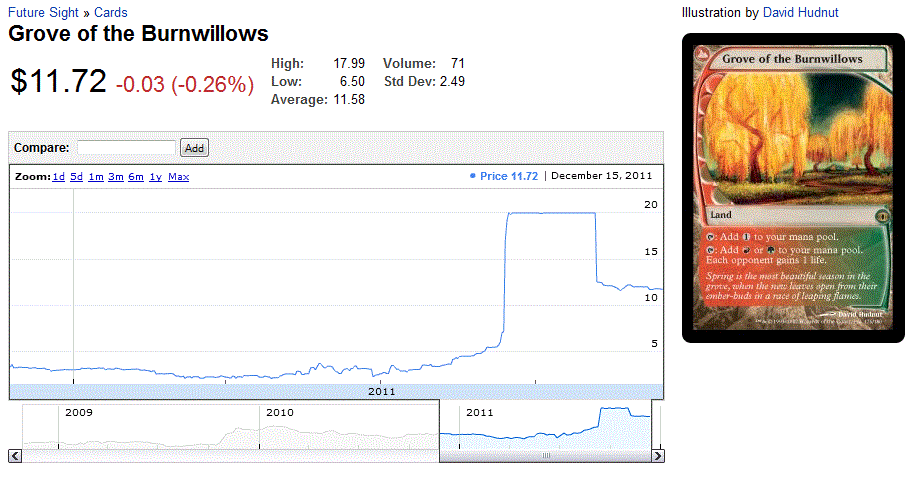 Grove of the Burnwillows demonstrated characteristic “Rapid Growth” profile. Once Modern became legitimate, the window to purchase this card cheaply was exceptionally narrow, but the rapid price decline was equally rapid. The ideal situation would have been to unload these cards at $20, possibly trading them for much more stable cards.

I strive to trade for cards that I believe are still growing at a rapid pace. At their peak, they are easy to trade and sell and can likely be converted easily into blue chip cards. Therefore, as I acquire the cards I want to speculate on I keep them towards the back of my binder almost as a reminder of what I am seeking. They may be for trade but I often meet less resistance when I tell others that the cards in the back are not for trade, versus having them in the front and not being for trade.

Once a card appears to near a peak, or once the buzz of reprints or bannings begin, I frequently place cards like Grove of the Burnwillows and Shock Lands in the front of my trade binder. I typically divide these into two binders – one for Standard and one for Modern/Legacy. I also tend to place the more valuable and most relevant cards towards the front and have subsequent pages of cards with decreasing value. This is the critical time to trade these rapid growth cards for something far more stable to place in my Monster binder.

The Middle of My Binder

While I wish my binder was filled with Shock Lands and other expensive cards, this is simply not the case. Other commitments keep me away from running the trade tables day in and day out. As a result, I frequently place cards from the remaining two categories into the middle of my binder. 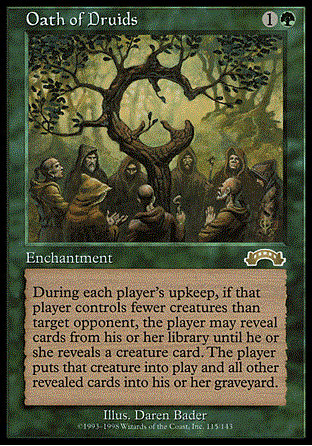 First are the banned cards which I refer to as the Vintage Section. These are the cards like Oath of Druids, Mystical Tutor, and Earthcraft which are currently banned in Legacy. Because they will never be reprinted and they cannot really be banned much more, these card prices will not decline. That being said, there is one thing and one thing only that would cause their price to spike – an unbanning.

Because of this all or nothing characteristic, I like obtaining these cards as throw-ins either from trades or as extra cards to buy from a seller to mitigate high shipping costs. While I don’t mind trading these cards away, I normally like to keep a handful in case the unbanning does one day occur. The middle of my binder is the perfect location for these cards. They may get noticed by an interested trader but they will likely be overlooked.

The second category that goes into the middle of my binder is cards I think have latent potential should a format take a particular turn. These are some additional speculation targets such as Visions of Beyond and Skaab Ruinator in Standard and Paradigm Shift in Legacy (chart courtesy of blacklotusproject.com). 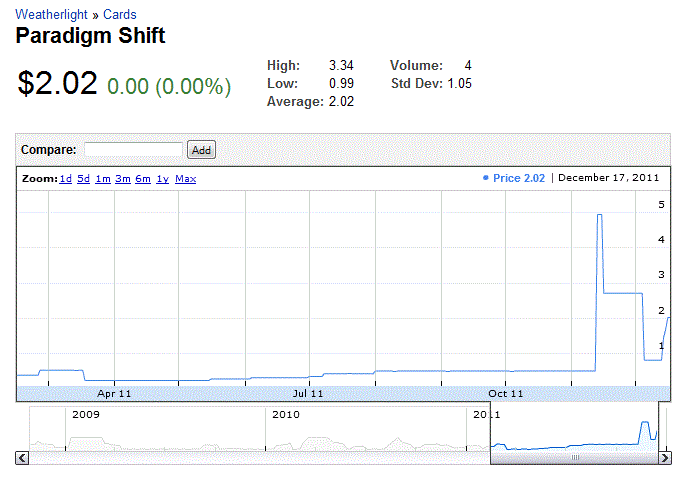 Every card I own which I feel may garner some interest at some point goes into the binder. Typically, these cards are spread throughout the binder but they still fit a particular pattern.

Standard, Modern, and Legacy cards I’m speculating on would go in the middle or the back of their respective sections. Cards which may interest the occasional casual player may also go into this category. But make sure you are aware which cards have a shot of [card Divining Witch]making a deck[/card] versus which cards are [card Thieves Auction]merely interesting[/card].

Again, the rationale here is that I want to measure interest in these cards by having them in my binder, but I do not want these cards to be the first my trade partner sees.

No one has a perfect binder setup. My descriptions above sound fairly organized but I fall behind all the time. This is no cause for concern, however. Having an organized trade binder is merely a tool that can help you organize your thoughts in a way that clearly outlines your trade strategy at any given moment.

Rather than focus on keeping the perfectly kept trade binder, it is far more important to spend that energy on researching card values and trends. Knowledge is truly a much more valuable asset to earn value from Magic. Still, organizing my binder is paralleled with organizing my thoughts and I find it helpful.

How do you organize your cards?