With the World Championships a few weeks behind us, you've no doubt grown tired of reading about all the latest tech in Standard and Modern. But with Adam Styborski (@the_stybs) as living proof, I know that there's a lot more to do at big tournaments than compete. Sure, in addition to the main event, the last Worlds of its kind had lots of Standard, Modern, Sealed, and Draft queues, but for those looking to let off some steam, as I was on Sunday, there existed a multitude of intriguing alternatives.

For me, the saddest part of the changes to Worlds isn't the loss of another 'Pro Tour' to qualify for, but rather the loss of a venue in which to meet up with Magic personalities from across the globe. When you bring a bunch of awesome people together, they're bound to come up with some great activities of their own, and I was privileged enough to get in on some pretty awesome things that you wouldn't have seen listed on the event schedule.

For those of you who have yet to play a cube draft, let me start out by saying that cubing is one of the most enjoyable activities known to man and is likely the best use you can put your cards to. Of course, building a cube is extremely time consuming and difficult, so the cautious among you will no doubt want to try the format before sinking your time and money into building your own.

Luckily, Gathering Magic has been working to help you do that with the Community Cube project. After cubing with it at Worlds, I took the cube to it's next venue: a PTQ in Santa Clara where I passed it along to Lokman Chen. Watch the cube's progress on Facebook and make sure to get in on a draft when it comes your way! 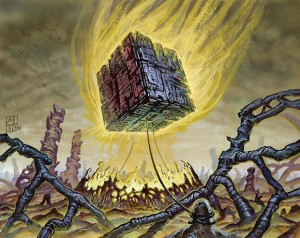 Then again, when you get the opportunity to cube with Adam Styborski himself, it's hard to pass up a chance at using his exquisitely tailored Pauper list. Adam and I Winston Drafted, and though the games mostly came down to one of us being mana screwed, it was still a great time. An impressive feat indeed!

What would a day of casual play be without at least one game of Commander?

Between drafts I sat down with Wizards' Trick Jarrett, Gathering Magic's Adam Styborski, and CMDR Decks' Uriah Oxford. Trick had finally managed to procure a foil Grimgrin, Corpse-Born earlier in the day and was excited to get to play it, and Adam was ready to show off his new Mono-You Sakashima the Impostor deck. Uriah decided on Eight-and-a-Half-Tails, and, as I'm liable to do, I pulled out Chorus of the Conclave.

The game started off with Adam drawing everyone a bunch of cards via Howling Mine and Trick deploying a couple of Zombies. Soon I started ramping a bit and Uriah established an untouchable board with his commander.

Trick started building up a horde with Endless Ranks of the Dead and I looked to draw a few cards off an Etched Oracle with some additional counters from [card Chorus of the Conclave]Chorus[/card], but Trick saw a better alternative and promptly stole it. Uriah had continued to build his board, but Adam was prepared with Brittle Effigy for Eight-and-a-Half-Tails.

Protection from White did nothing as the Effigy had already departed this corporeal realm, and the Fox Legend was dealt with for the moment. I took this opportunity to dismantle some of Uriah's artifacts and enchantments with Terastodon, but soon the Fox was back alongside Battletide Alchemist, Endless Horizons, and Caged Sun.

Trick's Grimgrin began his feast on my creatures while Uriah's [card Battletide Alchemist]Alchemist[/card] held off the hordes and Adam deployed [card Cackling Counterpart]a trio[/card] of Wurmcoil Engines and decided that one Solemn Simulacrum [card Rite of Replication]simply wasn't enough[/card]. This display was certainly the best Commander I've seen out of a mono Blue deck, and I would recommend it as an example to anyone looking to build decks to enhance everyone's enjoyment.

By this point, the game had gone on for quite a while and the board was really clogged, so I declined to play my freshly drawn Austere Command and instead made a 21/21 Skyhunter Skirmisher. Trick continued to grow his Zombie army, and Adam made a few [card Sakashima the Impostor]more[/card] Engines. I ran the Skirmisher into Uriah's Maze of Ith, after which he promptly summoned Glarecaster with enough mana to stop two thirds of the creatures on the board. Everyone was getting hungry, so Adam sent in the troops and soon all those unable to [card Glarecaster]cast glare[/card] were dead.

After Uriah headed off, Adam, Trick, and I met up with Lee Sharpe and Adam's wife, Diana, to grab some grub. We ended up at an Italian seafood restaurant near Fisherman's Warf, and quickly got seated to order. While we were waiting, Lee proposed we try out a new game called “Eight Curses.”

Like Lands, Eight Curses is played with Magic cards, but is really a separate game entirely, more akin to Liar's Dice than anything else.

I'm not sure who invented Eight Curses, but I want to thank Gavin Verhey (@GavinVerhey) for lending us his deck! After playing a bit at dinner, we met up with Richard Castle (@richardfcastle) for some Coldstone, then headed back to the out-of-towners' hotel for more Cursing.

Besides whatever one's friends were doing, Wizards certainly did its part to cater to those neither qualified for Worlds nor intent on grinding Planeswalker Points with a wealth of interesting public activities. 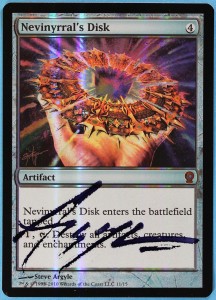 Right past the dealer booths, one would find an ever-changing roster of artists ready to sign their masterworks for the crowd. I personally have never been a fan of signed cards. I derive pleasure from how my cards look aesthetically rather than a vague 'specialness,' so my foils remain unadorned. That said, many love this sort of authentication, and I was happy to note that many of the artists were careful to sign cards with colors that complemented their artwork.

On top of the constant stream of artists, the 2011 World Championships featured free to join Magic Online Phantom Draft queues to all attendees. I ended up playing in one, and it was a ton of fun to draft without having to worry about trying to break even by taking expensive cards. Moreover, the low bar of entry brought a lot of people in. I even saw a father drafting cooperatively with his two grade school aged sons!

For those looking for some more competitive non-competition, Mark Rosewater hosted an Innistrad trivia game named “Question Mark.” While I didn't participate myself, I watched a decent chunk of the competition, and Bradley Rose (@bradleyrose)'s team even managed to win a box for Top-8ing. Anyway, you can (and should) read Bradley's own account of the weekend here, so I won't tread on his toes too much.

On top of getting to interact with the wider Magic community, Worlds offered a rare opportunity to meet the people who make the game we all love so much. Spellslinging with the people in charge of making Magic is a great way to get their ear while having fun, but Bradley and I cooked up a more devious plan which he started to describe in his article last week.

After waiting in line and letting people go ahead of us for quite a while, we finally managed to sit down across from Mark Rosewater and Eric Lauer at the same time. Mark took out his Standard Zombie deck to battle Bradley's Unhinged deck, and I told Eric I was playing casual. After Eric procured some sort of weak mill concoction, we shuffled up and he told me about the last time he'd spellslung casual and faced some sort of Legacy-level brew. I, of course, promptly led off by cracking a foil Verdant Catacombs for Underground Sea.

The good Mr. Lauer eyed me suspiciously, but I assured him that I wasn't doing anything quite that broken. I spent the next couple of turns learning from [card Demonic Tutor]Demons[/card] and [card Vampiric Tutor]Vampires[/card] before slamming a fourth turn Swirl the Mists on Black. 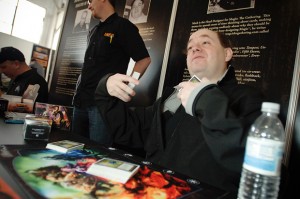 I'm not sure what was running through Eric's mind at this point. Was I going to go off with Murkfiend Liege and Unliving Psychopath? Or what? When he passed the turn back, I glanced over at the other game to see Bradley falling to a Zombie horde. I drew my card, tapped three lands, and intoned the holy mantra:

We all had a good laugh, and I managed to take out a Call to the Grave before getting decked, though it still wasn't enough to save Bradley's delicious, delicious brain.

The Last of its Kind

I'm positive that Wizards is doing what they believe is best for the game by changing Worlds, but that doesn't mean I won't miss it. The Magic community is fantastic, so, even if you don't play competitively, I highly recommend hitting up any large events that you can make it to. Hopefully I'll meet you there.

4 thoughts on “The Seven (Casual) Wonders of the Worlds”