The opportunity to pre-order spoiled Magic cards has drastically impacted the financial aspects of a new set. It would be a fruitless task to argue otherwise.

I would maintain that, despite this impact on the immediate perceived values of new cards, the ultimate price once a set is released is relatively unaffected. Even though sites like Star City Games have significant influence in the singles market, they still cannot grab hold of the economic “invisible hand” and set prices where they see fit. Ultimately, supply and demand will dictate card values.

Actually, this question should virtually never pop into your mind. On average, there have been about 1-2 cards per set that sold for significantly more than pre-order prices after becoming available for sufficient time.

The most notorious example is everyone’s favorite Planeswalker, Jace, the Mind Sculptor. Many skeptics, including myself, felt that a 4-mana Planeswalker that dies to Lightning Bolt couldn’t survive in Standard. In Legacy, I was convinced the overpowered Planeswalker would be way too slow to deal with the likes of Tarmogoyf and Ad Nauseam.

We skeptics could not have been more wrong. 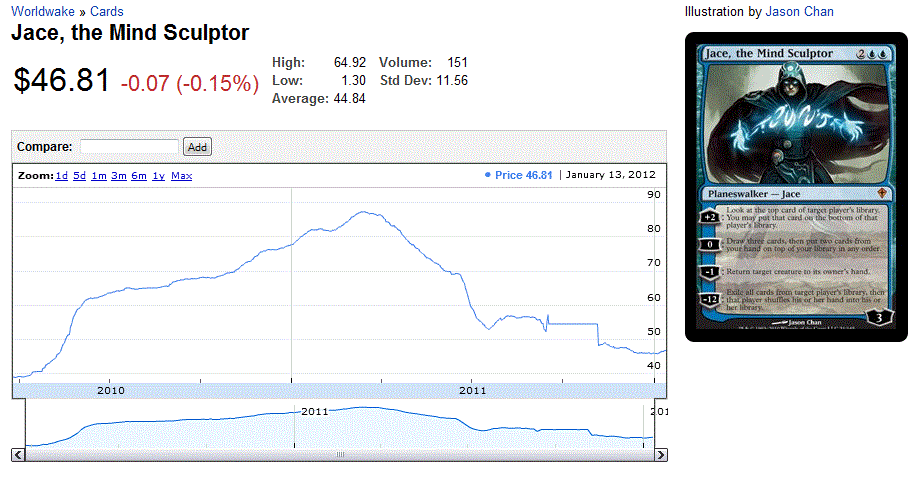 The above chart (courtesy of blacklotusproject.com) clearly highlights the opportunity speculators had to make bank on this card during pre-order season. Starting at just $40, the card more than doubled within a year of its release date.

Jace, the Mind Sculptor has been severely punished for his power level, having faced bannings in both Standard and Modern. Despite doubling and halving again in just two short years, I would argue his most impressive feat is his influence on un-released card prices. Because everyone wants to double their money on the next Jace, he has caused many spoiled mythic rares to pre-sell at astronomical [read: laughable] prices.

The most recent evidence of Jace’s influence is the price of the latest Planeswalker spoiled for Dark Ascension: Sorin, Lord of Innistrad: 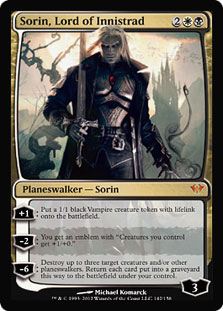 I won’t even try to argue Sorin’s playability – that much is quickly evident. He is acceptably costed at four mana and even has three loyalty to start, like Jace. But he is no Jace, people! He requires TWO colors of mana to play!

Despite this obvious limitation, people are still insistent on pre-ordering this card at the now-inflated price of $60.

Somehow, logic once again has been tossed out the window by many as they drool over a new Planeswalker. In fact, looking at pure statistics is enough evidence to suggest paying anything more than $35 for a Planeswalker is plain insanity. Other than Jace, there has never been a Planeswalker that exceeded this cost on eBay, although [card Elspeth, Knight Errant]some[/card] [card Gideon Jura] have [/card] [card Liliana of the Veil]come close [/card].

You Already Knew That

As I mentioned before, the exceptions are rare and difficult to identify. If they were obvious, the card would not have pre-sold at the lower price. Recent examples include Birthing Pod from New Phyrexia, Stoneforge Mystic from Worldwake, and Seachrome Coast from Scars of Mirrodin.

Looking at the spoiled cards thus far and their pre-sale prices on Star City Games, I can attempt to identify which card from this set will be worth purchasing now. This is a very challenging task – Star City Games has their best financial minds assessing spoiled card values and identifying appropriate pricing. Who am I to claim they have made a mistake on a particular card price?

The best I can offer is a comparison of the newly spoiled cards against historical cards. By drawing these parallels, I can try and predict how the Rares and Mythic Rares will behave once released. This is a task I attempted when Snapcaster Mage was spoiled, and I felt my assessment was reasonable. In rapid fashion, let’s see what we can deduce about the most costly Dark Ascension spoilers so far. 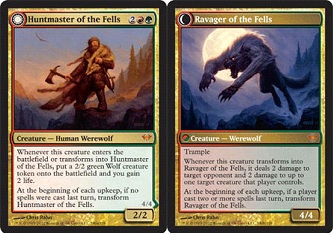 This transforming Werewolf inspires me to try an aggressive RG build in Standard. He provides four power of attacking for four mana and a source of card advantage when flipping. He currently preorders on Star City Games for $15 (recently reduced from $17.49). Is the old Huntmaster worth it?

Well, Bloodline Keeper can provide a more consistent source of creature advantage each turn, despite needing to tap. He is only a Rare so the comparison isn’t direct, but his $4 price tag suggests to me that the Huntmaster may not linger at this high of a price point for long.

The upper bound on Huntmaster is certainly Geist of Saint Traft, which provides six power of attacking and Hexproof for just three mana. Currently retailing at $20, this creature can be found for under $15 on sites like eBay. In summary, Huntmaster would need to see more play than Geist in order to justify its current pre-order price tag – this just doesn’t seem likely. 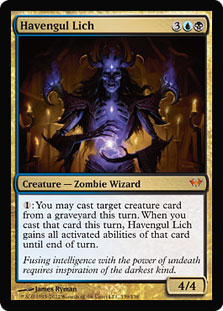 Havengul Lich provides some powerful recurrence power. He may be able to find a home in some UB control decks running cards like Snapcaster Mage. Is his $15 presale price tag justifiable? Possibly, but he would again need to see as much play as Geist of Saint Traft. Lacking Evasion or Hexproof is a large downside, though remaining outside of Incinerate range is a plus.

I am on the fence with this card. I could be convinced that Havengul Lich will make a splash, earning a $20 price tag in the long term. With all the recent synergistic cards that interact with creatures in the graveyard, he even has potential to shift the metagame and see $30. History does not indicate this likely, however. It’s much more possible that this card sells for under $15 on eBay within a short month or two after Dark Ascension’s release. 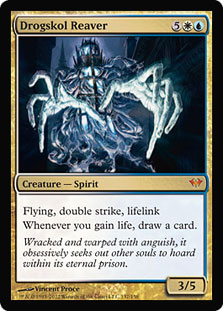 A 7-mana 3/5 creature needs to have incredible abilities in order to be playable. His life-gaining power and built-in card advantage are certainly points in Drogoskul’s favor. But is he truly worth preordering at $10?

He would need to trump other finishers in control decks, such as Elesh Norn, Grand Cenobite and Consecrated Sphinx. Both of these cards sell on eBay for around $12. Therefore, should Drogoskul find his way into Esper control or U/W control builds, he may in fact be worth purchasing now. Though, when you factor in shipping and a potential upside reward of $2, it hardly seems worthwhile. 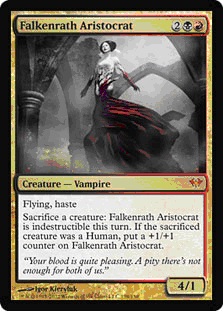 The last financially noteworthy (>$5) card spoiled from Dark Ascension as of January 14th is Falkenrath Aristocrat. With this Vampire, we can try to predict her future value by comparing her to her long-lost cousin Olivia Voldaren. The abnormally-legged Vampire peaked at $9 and now sells on eBay for close to $8.

Falkenrath Aristocrat is currently priced at $9 on Star City Games. When comparing this price tag to that of Olivia, it seems this Vampire is priced reasonably. If she sees more play than Olivia, she may even break into double digits. Her indestructible tendencies are a significant help, but she would have to find a RB deck to fit into. While one doesn’t exist quite yet, the possibility is nonzero.

Among the cards from Dark Ascension selling on Star City Games for over $5, it doesn’t seem like there are any huge profiting opportunities. A card like Drogoskul Reaver or Falkenrath Aristocrat may see an increase of a few dollars, but this is far from guaranteed.

There may be some cheaper rare that is pre-selling for $2 with significant potential. None leap out at me at the moment, but there is probably one or two. Either way, this is not a risk I am comfortable taking. Even if one of these rare cards does break out, there will likely be a small window of time where I can purchase a playset at a reasonable price anyway.