I want to open this article with a word of praise to Wizards of the Coast. Their Pro Tour Honolulu coverage was phenomenal. High quality video, relevant commentary and interviews, and frequent updates of player results all created an enjoyable viewing experience. They took an idea that has proven successful by Star City Games and kicked it up three notches. Well done!

Amidst all this coverage, information has been flying at us from many angles. Wizards’ own website consistently summarized various deck techs and cards to watch. Additionally, Quiet Speculation has been sending out frequent emails throughout the weekend highlighting key cards impacting the Pro Tour. Although somewhat overshadowed, Star City Games had one of their largest Standard opens yesterday in Cincinnati.

What Were the Key Highlights?

This is a time of flux. Dark Ascension is finally beginning to have an impact on Standard, and this was reflected at both the SCG Cincinnati open and the Pro Tour.

The largest splash, in my opinion, was the ubiquity of Huntmaster of the Fells. When this card was initially spoiled it pre-sold on Star City Games for $17.49. This was short lived, however, and the popular retailer dropped the price to $14.99 shortly thereafter.

Let’s see where the card stands right now (as of Sunday): 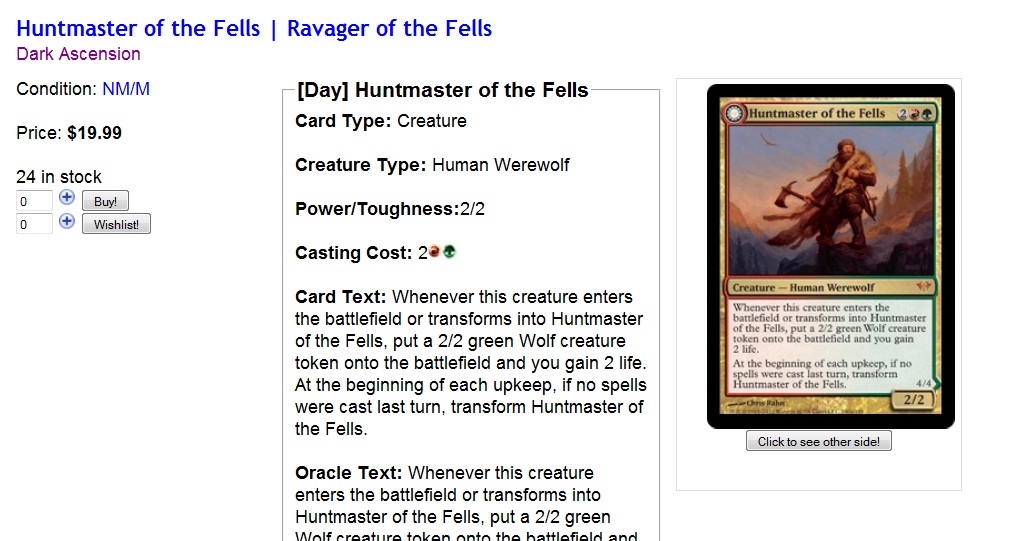 Star City Games has increased their price a healthy five dollars. Their buy price is eight dollars, which to me does not reflect an immediate increase in demand by itself. I have noticed recent eBay prices around $15, which does reflect a price increase. How do I know? Yesterday (Saturday) I purchased three of these Werewolves for $10 each.
A few other cards from Dark Ascension made a smaller splash worth noting. Dungeon Geists demonstrated potential value in blue [card Delver of Secrets]Delver[/card] decks. Whipflare made an appearance as a 1-of in PV’s and Kibler’s decks – both players made Top 8. Finally, Drogskol Captain, Strangleroot Geist, and Lingering Souls were a few Uncommons that appeared in Pro Tour Honolulu Top 8 deck lists.

Meanwhile, in the SCG open, Huntmaster of the Fells broke into two decks of the Delver-dominant Top 8. Heartless Summoning made an appearance in one SCG open Top 8 deck, combining with Havengul Lich. 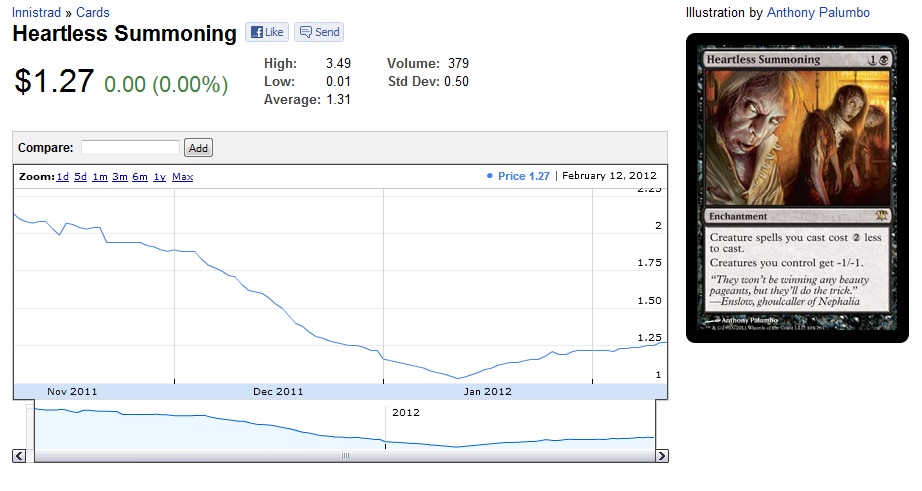 The chart above (courtesy of blacklotusproject.com) shows the rebound in the price of Heartless Summoning. A more dominant showing at the Pro Tour would have had a more significant impact on this card’s demand. Still, the price has bottomed for now, and Star City Games now sells the once-dollar-rare for $2.99.

So What Do We Do With This Information?

Please. I beg of you. Do NOT go directly to Starcitygames.com and buy out their Huntmasters (unless you are buying Lys Alana Huntmaster, which is only currently available in Japanese foil for $5.99).

If you were following along with Quiet Speculation’s emails, you would have had a window to pick up Huntmaster of the Fells for $10, as I did. I already regret not buying more than three. But it is a lot more difficult to convince myself to buy at $15 than it was at $10. I considered $10 very nearly a price floor, much like it is for other Mythic Rare hits such as Elesh Norn, Grand Cenobite and Geist of Saint Traft.

It is incredibly difficult to predict where the card will go from here. I suspect the price jump is not finished. Purchasing a set of Huntmasters at $15 each on eBay may still be a worthwhile investment, since the card’s popularity is likely to increase now that the Pro Tour results are in.

Keep in mind the old adage of economics: buy low and sell high. If you are going to purchase this card, or any others that have proven their worth in this weekend’s results, the time to move in is now.

If you do decide to move in on these cards, I urge you to monitor quantities in stock at Star City Games. Their website is a barometer for a card’s popularity. A great example of this is Elesh Norn, Grand Cenobite (chart courtesy of blacklotusproject.com). 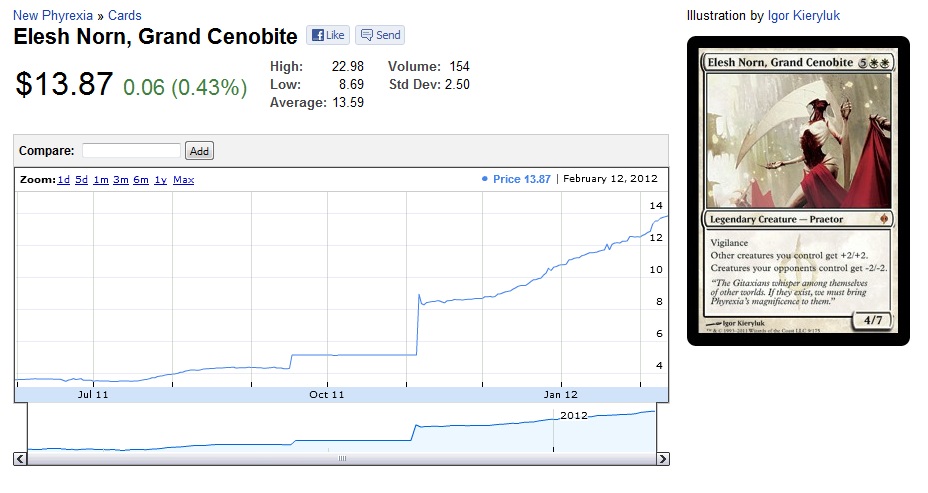 This card was seeing play as a 1-of in a few decks across formats. Esper Control (Standard), Melira Pod (Modern), and Reanimator (Legacy) all had reason to play a copy of this powerful Mythic Rare. To me, this level of play did not justify a price tag over $10. Yet, Star City Games was “sold out” of this card for the longest time with a price of $14.99. This should have been my buy indicator.

The card’s play has picked up a bit in recent events. Now the card sells for closer to $15 and Star City Games sells them at $19.99. A trend identical to that of Huntmaster of the Fells. Huntmaster, however, is not legendary and is played in multiples. Further evidence that this card’s run may not be over yet.

As for the other breakout cards, I am only moderately impressed with their results. Seeing two copies of Dungeon Geists appear in two Top 8 decks of the Pro Tour earns the card a second look. Star City Games is selling this 3/3 flyer at $2.99 much like Heartless Summoning, and I agree with their pricing. As a 2-of in one deck, this card’s price will not jump much higher. Should it become a staple across Blue decks, this card would move up another few bucks. I may pick up a set of this card now while it is cheap, as there is limited downside at this price point.

In a word, yes. One Mythic Rare… count them… ONE!... appeared in the main deck Top 8 at both the Pro Tour Honolulu and SCG Cincinnati. Havengul Lich managed to make the Top 8 of SCG Cincinnati, but the Heartless Summoning deck lost in the quarterfinals and hype around this card is significantly less.

Even on the Rare front, I would hardly consider Dungeon Geists and Whipflare as breakout cards impacting the metagame. They merely fit in nicely to already-established archetypes.

Based on these results, I will maintain my current position of this set with one slight amendment. I still recommend picking up older Standard cards that are putting up consistent results rather than Dark Ascension cards. Cards like Primeval Titan, Snapcaster Mage, and Champion of the Parish are all still showing consistent results and remain in high demand.

The amendment: I would consider picking up Dungeon Geists, Whipflare, and perhaps Huntmaster of the Fells. I will not go in deep on these, as that’s not my style. But now that these cards are on everyone’s radar, they will see much more play at FNM’s and local tournaments. This should keep these cards high in demand for the time being.

It is 8:45pm on Sunday, and the Pro Tour Honolulu Finals consists of PV and Kibler. Both players running a Kessig Wolf Run build with Huntmaster of the Fells. The financial impact? Take a look at Huntmaster's listing on Star City Games now: 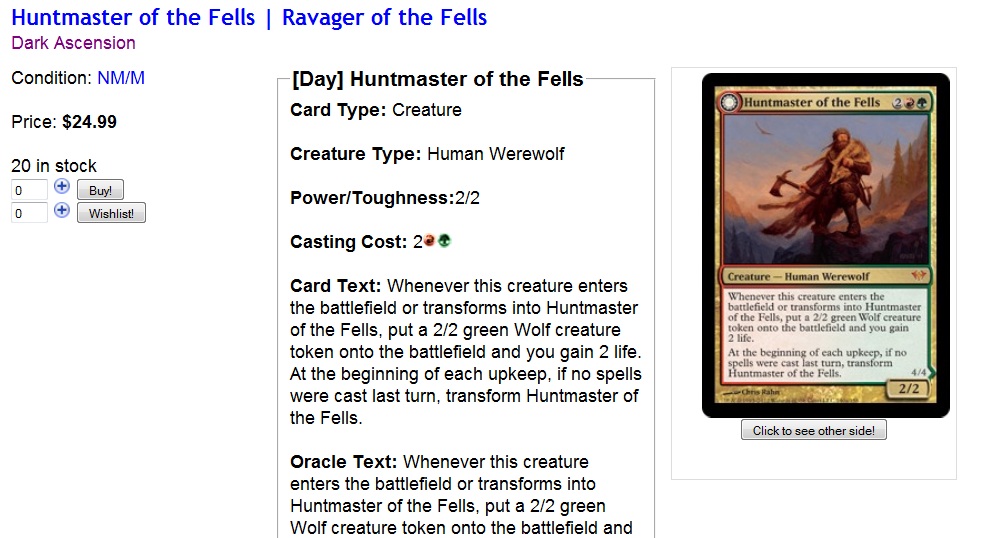