Huge 8-drop Angel that certainly changes a boardstate is no slouch, but I don’t see it making any waves in most constructed formats. I’ve hard rumors of it being a Reanimate or Unburial Rites target, but there’s just better stuff available. Perhaps after the rotation of Elesh Norn from standard, Avacyn will be a more desirable target, but until then this will be an EDH monster only. Short term, this should fall down to the $8 area, and long term has potential to go back up to the $15 range, but only if the meta is right.

Another huge monster that will certainly grace many a Commander game, this is the biggest Overrun effect we’ve ever seen. I expect it to be a fan favorite for years, but not a chance this sees the light of day in constructed. To be honest, this card could be a better Reanimate target than Avacyn, especially in a “Dread Return” deck. $3 is about right to me, just in that it’s a mythic, and people will want it early to throw into their EDH stompy deck. But ultimately this will fall to $1-2 and eventually onto the bulk Mythic status.

Huge monster? Check. Insane ability. Double Check. See a pattern forming here? This guy however does have an effect worth reanimating for. Paying seven life for seven cards is a good deal, especially on a lifelinker that can get the life back if needed. Although if you draw seven cards and you didn’t win, i’m not sure seven life will fix that. I expect this guy to see some amount of Standard play, but not a ton, and likely not even in multiples, so he should settle around $5 a couple months from now.

This is the biggest question mark of the Mythics for me. She’s got an unreal set of abilities, but the mana cost is a bit prohibitive and awkward. A big shroud-y flier would be an interesting finisher in a Bant Control deck, or a late threat in a Mythic-Bant style deck. I think this card will definitely see standard play, but how much? This will depend on a huge number of factors. I could see this potentially hitting a $20+ mark, but could also see it dwindle down to $10. For me, I have high hopes for her, but it's to early to tell just yet.

Woahhhhh. They printed a new Time Walk! I have no doubts I’ll be sleeving up this card during PTQ season, but I’ll guarantee I won’t pay $40 per copy. Maybe $40 per set. Hopefully you made some money on the Personal Tutor speculation tip Doug sent out, because that ship has sailed, and most have already discovered that this combo is truly a non-bo. If you picked some up, I’d move them right back out as soon as possible. Spending mana and a card to set up this Miracle (see: Skip a turn), to take an extra turn has “Magosi the Waterveil” written all over it. Not that I don't think Temporal Mastery is good, it is, but putting all that work into setting up the miracle is not the way to do it. I think Brainstorm or Sensei's Divining Top are legitimately the best ways to set it up without tempo loss. Other decks, perhaps in standard, are just hoping to mise the miracles, or are willing to pay the extra cost if need be later down the line. This should be a $12 card, I’ll wait till then. 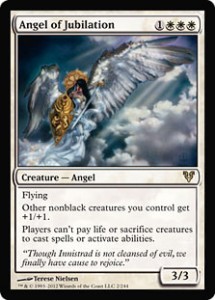 This is one of my favorite speculation targets thus far. She’s an aggressively costed flier, that perfectly tops an aggro deck acting as an anthem. She also is an answer card for Birthing Pod, makes Phyrexian spells play fair, and even stops Force of Will(although I don’t expect that interaction to be very relevant). The only thing stopping me from a deep buy on this card is the 1WWW mana cost. It makes it hard for the multi-colored aggro decks to fit her in, and she may not be good enough for the control decks. I think $4 is the perfect price for her, so I’m just going to wait to pick them up at the Pre-release in trades.

I’m buying in on this guy. He’s enormous and evasive and extremely undercosted. He has amazing synergy with the black cards already played in Standard. I look forward to sacrificing a Geralf's Messenger to him, or maybe a Gravecrawler. This guy is not a joke. He should be a $4-5 card and I’m pre-ordering at least 2 sets.

This is the biggest gamble card thus far. It has potential to do some pretty broken things, its just hard to tell if 3 mana is too much for it to make a splash, but if it is, this card could shoot through the roof. At the least, it will be an EDH staple, and $1 is a pretty safe investment. Unless other spoilers appear increasing its playability, I’ll wait, but wouldn’t fault anyone for gambling on this one.

This is our Black “Wrath”, it’s not a do-nothing, but its really not very exciting. It’s much worse than the Black Sun's Zenith that is already in the format, and it gives your opponents too many choices. After rotation, there’s a chance it sees some amount of play, but this is not a $2 rare.

This equipment costs way too much mana both to cast and equip to be playable in any format other than limited or EDH, and in EDH its got way too much competition. Not to mention it’s also a foil promo, this is a bulk rare.

I understand why this one is seeing some hype. It’s easy to cast, its a flash ¾ flier for 4, and it blinks one of your other creatures for value. This will certainly see tons of constructed play, I think $5 is about right, but it could creep up to 7 or 8 if the deck it fits in sees tons of popularity during PTQ season.

This guy is the Buy-a-Box promo, and he also showcases the new Soulbond mechanic. I think he might see some play, but he’s pretty much outclassed by Mirran Crusader. After rotation he may see $3 or $4 but till then I doubt he’ll be more than $1-2.

I’m looking forward to more spoilers throughout the week. Pinpointing the value Uncommons is going to be the huge gainers for PTQ season, and opportunity for major profits.

Let me know in the comments which cards you like more/less than I do, and what you’re hoping to see in the coming weeks!