The last week before official previews week is always a little slow in the world of finance. We’ve gotten our first preview of Avacyn herself, and she’s certainly going to be a popular EDH card but not likely to be worth investing in. The real question is what can we be doing now to either gamble or hedge for the next set? Time for some speculation in the most literal sense of the word.

What we know we’ll see: 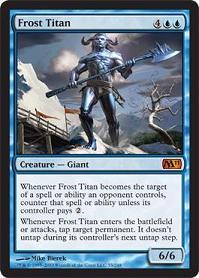 The completion of the Enemy Colored Utility Land cycle, We have still to see U/R, U/G and R/W utility lands. What types of lands will these be and will they create new decks or complement existing decks at all? My good friend John Kasari has been doing very well with his Wolf Run Blue deck, which combines the power of the classic G/R ramp deck, and adds the tempo cards of Frost Titan and Vapor Snag. He finished 13th at the GP in Salt Lake City, and Top 8 at a Star City only a couple months back with this list. He told me personally when Dark Ascension was spoiling that he was really hoping for an awesome utility land for this deck.

The only card currently in the deck that has some room to grow is Frost Titan. As we’ve seen many times before, the Titans tend to cycle around in popularity, and it may be Frost Titan’s time to shine. You can find it around $2, and I don't expect it to drop any time between now and the end of Standard PTQ season, so I find it as a pretty safe pick-up.

Angels are certainly a theme in this set if the art revealed so far is any sign. Throughout history Angels have been a classic U/W control finisher starting with Serra Angel and most recently Baneslayer Angel. If there’s a solid angel at the 5-6 drop slot, I’m going to strongly consider it. This simply means the Gideon call from last week is indeed a good play. It also tells us that Geist of St Traft is not going anywhere anytime soon.

Are we going to get a G/W human lord? It’s certainly possible, and in reality, it may be all a G/W Gavony Township deck needs to really shine. Township itself probably isn’t going to jump much in price, but Champion of the Parish and Mirran Crusader are the two guys I’m keeping bookmarked with some of my favorite Online Vendors. If spoilers look favorable for Human decks, I plan to buy a boat load of these.

Are we going to get support for Vampires? Vampires, and more in general B/R aggro decks haven’t seen the light of day in quite some time. There’s great removal and burn there, but the cheaper efficient creatures don’t really have a critical mass to form a good deck. If we get a good rare 2-drop for the Vampire deck, I could see this coming into popularity. If so, the biggest gainer would likely be Blackcleave Cliffs which is only $6 right now. If the other “fast lands” are any sign of a ceiling, this could easily hit $12 or more during PTQ season.

We always get new Planeswalkers in each set, but being a large set, we may see as many as three. Will any returning characters appear in new incarnations? Will the U/G ‘walker that’s been rumored for some time finally appear? Unfortunately Planeswalkers are very finicky with respect to their financial value, and there’s not much speculation to be made without seeing exactly what color, cost and ability we’ll be getting out of them. This will obviously be the most anticipated reveal of the Spoiler season.

Flashback (as well as the other mechanics like Morbid and Fateful Hour) will not be returning. So if you were hoping an Altar of the Lost deck, or Burning Vengeance deck would be for real, bad news. But that does mean we’ll get some new mechanics which can potentially open up some value for cards that sit in our bulk binder. If you have any speculation holdings floating around waiting for further Flashback support, it’s not coming.

I’m very excited for new set, as spoiler season is always the most profitable time of the year, and coinciding with Standard PTQ season is great news for speculators. Keep your eyes peeled for leaks and rumors, and try to keep your buys in things that are fairly safe as even as cards are spoiled there may be other cards that pop up later that hose the strategy you’re speculating in.

See you next week!
Chad Havas
@torerotutor on twitter.