I’m back for another installment of my archives. I don’t want to waste another minute up front because I am (almost) literally giddy about what I have for you up first. Continuing my motif of providing you with quality Q &A in the form of IAMAs on reddit.com, we have what is possibly the most exciting IAMA to date, MARO himself!

Take the time to give this a read, it’s well worth it. 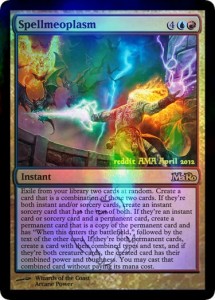 Did you read the whole thing? It’s cool if you didn’t, but if you did, you will get a real kick out of what I have up next.  Redditor Fissionessence made a foily mockup of the card Rosewater said at the top of his IAMA that he’d like to see:

If you haven’t gotten enough MARO Q&A, Redditor  jpjandrade pointed out that MARO has a tumblr where he does a Q&A practically daily! Very nice find, jpjandrade!

Garruk66 blew my mind with the nine Planeswalkers he cooked up himself. It’s amazing what creative people can do with a little bit of computing power backing them up. Take a look at what he came up with: 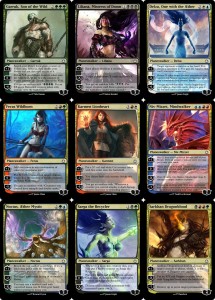 Redditor Sivin96 linked some sweet pics of some laser-engraved deckboxes.

I may have to gate an artifact every upkeep, I’m so jelly. You know, like Esperzoa? Because... because he’s a… his card type is… jelly... fish.

The folks over at MTGSalvation are taking a very analytical, numeric approach to the spoiler. Using the set numbers on spoiled cards, they have come to a number of seemingly accurate conclusions about the cards yet to be spoiled.

This is well worth a read if you’re eager to know whether there will be any more multicolored cards in Avacyn Restored and if you're intererested in the clues the flavor of the set has given us about potential new cards.

Finally, let’s dig into some decklists!

This last weekend was the SCG Open in Phoenix and the top 16 had a few surprises.

In less surprising news, however, there were 4 copies of U/W Delver in the top 16 of Standard. Some notables included a U/W Puresteel Paladin list piloted by Ryan Sterbenz. He seemed to be the only Mortarpod-based strategy breaking the top 16 as many players have managed to solve the Zombie problem.

R/G is very popular and its variants include a Naya pod, a pod-less Naya deck and the R/G Aggro strategy, piloted by Yurien Seyssel taking top honors.

Esper is also beginning to pop up at more events where Blue players are realizing that if you can’t beat the card advantage from Lingering Souls, you may as well run it. The Black inclusion gives control mages access to myriad answers such as Bloodline Keeper and Curse of Death’s Hold, which helps make sure your opponent’s souls don’t linger for long.

The legacy portion of the event saw four Delver strategies in the top 16, which is a worrisome trend for those of us who don’t want to see Legacy turn into standard 2.0. Ironically enough, in a top 16 swarming with Insectile Aberrations, there wasn’t a Punishing Fire to be found, as the only top 16 Maverick list stuck with G/W.

I particularly enjoyed seeing Jason Broach’s Hive Mind list get third at the event. With Storm, Belcher and Hive Mind in the top 16, maybe Legacy isn’t entirely ruled by Delver just yet. Sherwin Pu’s RUG Delver list did take top honors, however, with a sideboard that containing three Sulfur Elementals.

That’s all I have for you this week , loyal readers. Until next time!