My name is Jason Alt and I have a problem. Since 1996 I have been a Spike. It started innocently enough at first. A quick peek at Top 8 decks on thedojo.com here, a partial rancoredelf spoiler before a prerelease there, nothing hardcore. Soon it had spiraled out of control. I found I had to win 2 or 3 FNMs a month just to get the same buzz. I really hit rock bottom when I was selling Magic cards just to pay for my addiction. I needed help, so I turned to the most reliable source of useful and scientifically accurate advice - the internet.

Maybe you are where I was. Have you ever found yourself turning your nose up at people playing casual games for no stakes at your local shop? Have you ever dropped after one loss at an FNM? Do you not own an EDH deck? Can you remember the flavor text on Time Warp? Maybe you can still remember when this game used to be fun. Are you still having fun? Maybe you are, and that's great. But maybe you aren't having fun unless you're winning.

I want to share something with you, something that got me through my darkest days when I considered quitting Magic altogether. When I turned to the internet in my despair, I found a world of Magic-related content entirely divorced from building and wielding tournament-caliber decks.

Some of it doesn't even have to do with actually playing the game at all.

I humbly offer it here for your consideration. Think of it as something to cleanse your palate after an afternoon spent trying to optimize Delver or your sideboard for Maverick. I have mined the farthest reaches of the internet to find you unique and entertaining content that will hopefully make Magic fun again (or if it is, even more fun).

Without further ado, I present my archives.

First up we have a rare glimpse into the mind of a true innovator. Pat Chapin took some time to do a Q&A over at reddit.com.  Pat spills his guts about playtesting, his book and even his favorite artwork. This is a quick read and well worth checking out if you’re a fan of “the innovator”.

Next we have a group of talented and creative Magic enthusiasts who are helping the rest of us accessorize. 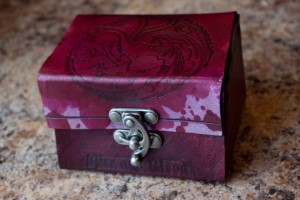 First up, Redditor MurderSheScrote shared this gem with us.

A functioning deckbox made from leather by his wife, Samantha who is a leatherworker. If you’re jealous of his cool swag, Samantha has an etsy page etsy.com/shop/TaeliacStudio and can make custom deckboxes to order. I’m waiting on a TARDIS deckbox myself. I see the appeal of a box that’s small enough to fit in your bag but is big enough on the inside for your entire collection.

Redditor Miss_Kitteh posted a pic of some gorgeous full art islands she altered, making it clear she does commissions: 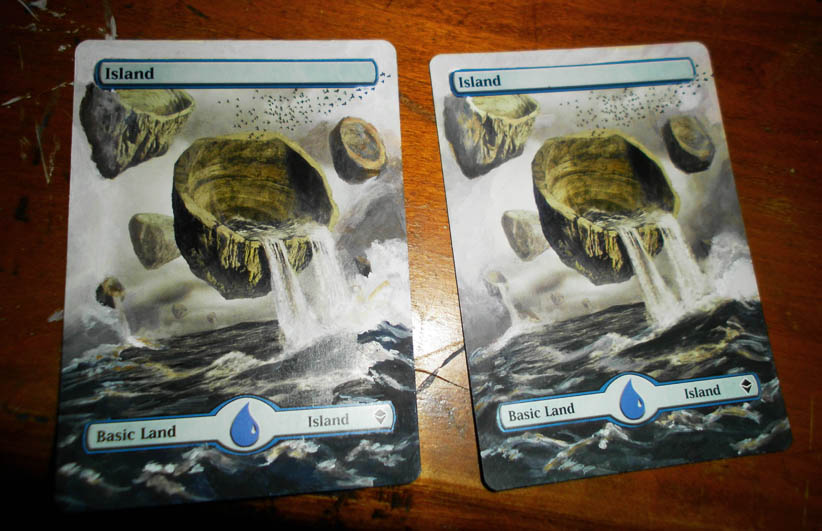 Hit her up on Reddit to arrange custom alters. Keep up the good work!

Lots of posters on the MTGsalvation forums suggested InkedPlaymats.com as the go-to source for making a custom playmat with the image of your choice.

I ran into Magic artist Drew Baker at GP Indianapolis, who also does custom playmats as well: DrewBaker.com. I’m currently rocking a Drew Baker playmat of an original piece Drew did featuring the Planeswalker Garruk Wildspeaker.

Have you gotten a custom playmat? Post a link to a pic in the comments and let everyone see.

In my search for original magic content I stumbled across something that blew my mind. Redditor efofecks created an entire expansion set based on Starcraft complete with decklists for each race and a visual spoiler. I ported the files to Magic Workstation and tooled around for a bit with some friends and we had a blast. You don’t have to be a fan of Starcraft to get a kick out of this expansion, but it can’t hurt. Kudos to efofecks!

Rise of the Titans

If Starcraft isn’t your thing but you like fan-made expansions, check out Rise of the Titans over at misterorange.com. At 295 cards and custom mechanics, this must have taken forever to complete. Follow the links on the site to other forums to discuss your favorite cards.

To lighten the mood a bit, MTGsalvation forum users have been giving nicknames to their cards. Some are intuitive and some are… well, you’d better see for yourself.

Over at The Mothership, players are discussing what could possibly be in the Helvault at the Avacyn Restored prerelease. Personally, I hope it’s a swarm of starving, angry hornets. Or candy.

The Past Weekends' Events

Last weeked was a sort of a slow weekend for events, but one highlight for me was the SCG Bronze TCQ in Grand Rapids, Michigan, won by Kalamazoo's own Deshaun Baylock. Check out the Top 8. Way to go, D!

The Star City Invitational gave us a glimpse into some new possibilities with a birthing pod deck taking the top honor. Azorious and esper are still king though, with mage blade and UW spirits predominating the top 32.

Delver was the winning deck in Salt Lake city, but it's impossible to ignore the RG we've been seeing. RG aggro, Naya pod, wolf run; there are a lot of applications for Huntmaster of the Fells it seems.

Will equipping Delvers and Stalkers still be relevant when Avacyn finds itself restored? I'll leave it to you to speculate.

for you this week! Let us know in the comments if you're picking up what I'm putting down. If you want me to find some more of these undiscovered gems, I'm glad to mine the vast, unexplored reaches of the interwebs.

Until next we meet,