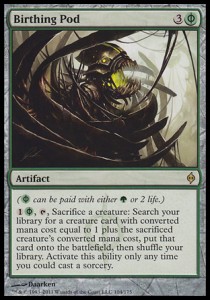 An old power has recently returned to Standard. Though you may not know it from its price tag ($3), Birthing Pod is back in force and looks like it’s here to stay.

The Birthing Pod list that top-eighted Pro Tour Dark Ascension seemed to quietly escape everyone’s notice. Lately though, Pod has put up a string of high finishes including a win at the Star City Games Invitational in Baltimore. Pros such as Brian Kibler, who himself piloted a Pod deck to 10th place in Baltimore, have begun to write about the deck.

In short, Birthing Pod is the real deal.

About a month ago I wrote an article advocating for Birthing Pod, which you can read here. Today I'll talk about the reasons for Pod's resurgence and walk you through a couple lists.

Shifting Position in the Metagame

What caused Birthing Pod to jump from fringe tier-two status to competitive all-star in so short a time?

Answering this question will help us to better understand why decks appear or resurface when they do. Changes in the metagame do not develop haphazardly, but rather as a natural product of earlier developments. Understanding how this process works can give you a huge leg up on the competition when it comes to deck selection.

The Standard metagame is often shaped by a series of shifts that seem to cascade from one to the next. We can identify one of these chain reactions in recent developments that ultimately worked to the benefit of Pod decks.

It began with Zombies’ sharp rise in popularity, which sent Wolf Run into a downward spiral because of its terrible Zombies matchup. As fewer Wolf Run decks made an appearance, their natural prey became more viable. This set the stage for Birthing Pod, now free from the threat of its worst match-up, to become a major contender.

Of course, the situation could just as easily shift further to undermine Pod strategies once again. For example, if Zombies were to decrease in numbers, Pod may be adversely affected.

That being said, I don’t think Zombies is likely to drop significantly in popularity unless Avacyn Restored really shakes things up. Tribal decks always enjoy a strong following which will carry the deck even if it loses some of its power.

The takeaway here is the importance of monitoring the metagame carefully when making deck choices. A deck that proved viable in the past may be a poor choice right now. Alternately, a deck that was underpowered before may be set up for a revival.

Before you rush in to commit to a particular strategy, make sure you’ve considered these possibilities.

Several different takes on Birthing Pod have recently put up good results. Here are a few to give you an idea:

Both of these decks tend toward the aggressive side of the spectrum and are capable of applying lots of pressure. They are also designed to function consistently even without a Birthing Pod.

Strangleroot Geist, Blade Splicer and Huntmaster of the Fells are the core creatures. They appear in multiples because you want to draw them early and often.

The singleton creatures, obviously useful as tutor targets and Pod sacrifices, are also strong enough in their own right to be reasonable draws. The risk of drawing too many high-cost creatures is offset by a plentiful supply of mana acceleration.

Finally, note that both decks contain multiple copies of Gavony Township. This land is powerful enough to see play in Modern and certainly adds a lot of value here too.

The decks differ in a few significant ways.

First of all, Kibler’s mana curve is much lower, stopping at a mere single six-drop where Tietze has three sixes and one seven.

Kibler’s build seems to respond to a philosophy of an aggro deck that happens to have Birthing Pod in it. The inclusion of only two copies of Pod also points in this direction.

Another major difference, which may not seem that important at first glance, is the presence of Thalia, Guardian of Thraben. Between his maindeck and sideboard Kibler has access to the full set, whereas Tietze did not include the card at all. I think Thalia is an important inclusion as she does a lot to improve several matchups.

Finally, Kibler has access to Vorapede, which beats up on control opponents effectively.

Settling on a Build 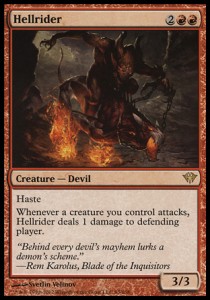 In general I like the direction Kibler has taken the deck in, so I’ll start there for my version. There are just a few things I would change.

To begin with, I don’t think Garruk Relentless belongs in the deck. Once flipped, he does get to search up the various tutor targets, but he’s relatively clunky and doesn’t synergize with Birthing Pod itself.

If I were going to run a planeswalker, I would choose Gideon Jura instead. Gideon seems to do Garruk’s job better and will have a much larger impact on the aggressive matchups.

The next change I would make is to trim the number of one-mana accelerants. With a low curve and lots of two-drops, the deck will be less reliant on acceleration. The recent resurgence of Gut Shot is another reason to shy away from running a glut of vulnerable X/1s.

There are a couple cards absent from both lists that I feel are too good not to include.

The first is Hellrider. Much like Gavony Township, Hellrider makes all your random dorks better and provides much needed reach in the late game. If you can land a Huntmaster of the Fells and follow it up by podding Blade Splicer into Hellrider you can smash for a boatload of damage. One copy should suffice to add this dimension to the deck.

The other card that has impressed me is Lead the Stampede. It’s common to draw three or four cards off of Lead the Stampede, which lets you overwhelm your opponent in a game stall. That kind of card advantage is hard to come by in Standard unless you’re casting Consecrated Sphinx.

Here’s how I would build Birthing Pod:

As you can see, my list is a hybrid of the two decks above, but a little closer to Kibler’s.

The aggressive curve here is complemented by several ways to disrupt your opponent. The [card Oblivion Ring]Oblivion Rings[/card] get you out of a lot of tough situations and come highly recommended. As for [card Thalia, Guardian of Thraben]Thalia[/card], I think three is the right number but I could see cutting one to make room for something else.

The [card Tectonic Rift]Tectonic Rifts[/card] in the board are my tech for the Wolf Run matchup. Right now I’m bringing them in to replace Thalia, which becomes worse post-board in the face of their extra removal.

While it may seem like a crazy choice, I can assure you Tectonic Rift has tested quite well. In addition to setting them back a turn by destroying a land, it can set up an alpha strike through any number of blockers.

One of the cool things about Birthing Pod decks is how they can be customized to fit different play styles.

My version aims to be as aggressive as possible and use Pod to push through damage in the later turns, but you could just as easily build Pod to occupy a more controlling role.

Several of the one-ofs can also be switched out for other options. At each point on the curve there are a large number of viable creatures that advance different strategies. When changing things up, just remember to keep in mind your overall game plan and include the creatures that work best towards that goal.

Unleash the Force of Birthing Pod!

One thought on “The Changing Face of Birthing Pod”