Avacyn Restored is upon us in all its Angelic and Demonic glory. It appears Wizards of the Coast has hit another home run with this set, at least with casual players.

An Angel collector myself, I was even compelled to purchase a fat pack and try my luck at nine packs of Avacyn Restored. What I found inside, however, was utterly disappointing. 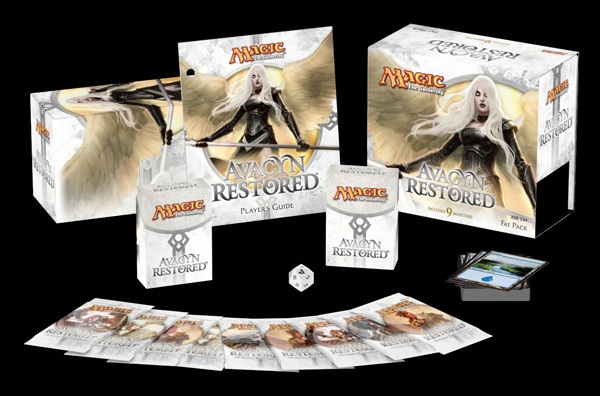 Utterly dismal, these packs likely have trade value on the order of eight dollars and it really frustrates me that Wizards can’t at least ensure there is at least one Mythic Rare in each fat pack.

But this article isn’t completely about my anecdote, although it is certainly related. Instead, I want to dive into a deepening dichotomy Wizards has created through multiple questionable decisions they’ve made.

Do I Feel Lucky?

I have commented before how opening Magic: The Gathering packs have become analogous to scratch-off lottery tickets. The introduction of the Mythic Rare and Planeswalkers has compounded this result. While the inconsistent payouts to purchasing packs may be rewarding and even addicting to some, it has really dissuaded others from ripping open random sealed product.

The result is the first step towards the dichotomization I alluded to. Much like the purported dwindling of the middle class within the United States, many people have identified sealed Magic product containing middle-of-the-road value a thing of the past.

My most recent experience is a microcosm of this observation. Statistics may be the underlying body governing what people open in their packs, but at times the numbers appear suspicious. Even if I accept the fact that my luck was perhaps particularly poor this last fat pack, the general trend remains the same. And, given the psychology that my own experiences frame my perceptions on random distributions of events, I am left with a saddening conclusion: opening packs is feast or famine. The feasts are far outweighed by the garbage rares distributed throughout packs.

My hypothesis is further supported by fellow Tweeters who were quick to either commiserate or counter-argue with my own experience. Here are two examples, which occurred nearly simultaneously within the Twitterverse:

I realize statistically this sample size is insufficient – this I cannot argue with. But my individual perception is absolute and cannot be refuted. In this moment, my perception is that opening fat packs is like playing the lottery.

I have not had success playing the lottery in the past, so why do I continue to open packs? I may need to stop. After all, everyone knows the best way to obtain desired singles is to purchase them directly. Opening packs is monetarily inefficient as dictated by statistics.

Well Do Ya, Punk?

As I discussed last week with Hasbro’s recent earnings results, this strategy of feast or famine has clearly been successful. The makers of Magic: The Gathering have identified a way to legalize gambling for all ages. A 13-year-old can purchase a pack of Avacyn Restored for four dollars, open up a foil Cavern of Souls and proceed to sell it for forty dollars – a lucrative day at the local hobby shop.

On a related note, the recent Helvault experience magnifies the gambling experience.

What am I alluding to? The recent publication [confession?] of Wizards, which explained the distribution of jackpot Helvaults throughout the world:

We wanted to provide a unique Magic play experience for our players, so we made some Helvaults with special contents. Of the roughly 6,000 Helvaults we sent out, we selected 30 Helvaults to get this special treatment. We picked randomly from our Advanced level WPN stores and sent the Premium Helvaults to their new home. These stores received Helvaults which had the following inside:

Do you realize what this implies? There was a 1 in 200 chance of opening the special Helvault! What was inside? Only a handful of promo foil cards arguably rarer than Beta Black Lotus!

Considering the fact that foil tokens are averaging $70 on eBay and the foil oversized promos are even higher, the result was the random giveaway of thousands of dollars worth of cards in each special Helvault. 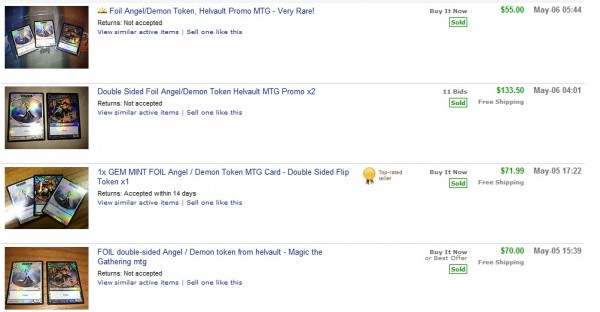 In fact, assuming each oversized foil promo is $100 and each foil token is $70, we can readily calculate that the value of a special Helvault auctions for at least $13,000!!! Talk about hitting the lottery!

Now the payout for attending your local Magic events is beyond even the lottery tickets you buy in the form of booster packs. With special events like these, a whole new level of gambling is created based solely on which event you attend and where. Anyone could have walked out of a hobby shop with hundreds of dollars in cards after an event like this one.

Magic players are known to grumble and groan when they shouldn’t. After all, it was generous of Wizards to create this giveaway – they certainly did not have to shell out the thousands of dollars it costs in printing, distribution, etc. for running a promotion like this. By having this drastic dichotomy in relative payouts, however, Wizards has only watered the seed that is the entitlement Magic players feel they deserve.

For Me, Always Assume There Is a Sixth Bullet Left

If you don’t get the reference, check this video out: http://www.youtube.com/watch?v=u0-oinyjsk0

What I am implying here is the perhaps painful message to Magic players around the world that we are NOT entitled. When you buy a scratch-off lottery ticket, you certainly do not expect to win, right? In the same vein, when we purchase a pack of Magic: The Gathering cards, we are only entitled our fifteen cards and one rare. We are never guaranteed to earn value back on packs.

With all the random promotion giveaways Wizards decides to organize, we are receiving free product. Rather than point fingers at the next guy over and accusing Wizards of showing favoritism, we need to remind ourselves that this is the reality of randomness.

Of course, this gambling experience the creators of Magic have fostered may not be appropriate in general. For most true games, the question of profit only becomes relevant with professional success. As it always has, Magic falls within a very unique category by containing aspects of both a game as well as a gamble.

My approach to this realization will remain firm from this point forward. I never purchase scratch-off lottery tickets because I anticipate losing. In the same sense, I will refrain from purchasing booster packs and fat packs because I do not wish to spend my hard-earned dollars on bulk cardboard.

My most recent fat pack experience solidifies this. With thirteen Angel creatures in Avacyn Restored, some of them even commons and uncommons, I was convinced I would open at least a few. Instead, I was punished with opening only two: Seraph of Dawn and Angel of Jubilation. At the price of $40 plus tax, this was a very poor outcome and highly reflective of the gambling nature of this game.

When odds are increased, and you are looking for simple commons and uncommons from a given set, opening such poor fodder is an even more fateful dagger. My message to Wizards and the broader Magic community: until this dichotomy is removed, I vow not to open another sealed pack of Magic outside of Limited tournament events. Who is with me?

14 thoughts on “Insider: Magic: The Gambling”