I went to my first PTQ of the season this past weekend, and while I didn’t have the results I was looking for (3-0, followed by 0-2) I scoured buylists at the dealers to start prepping for the remainder of the season. What I found was a slight shift of what I’m used to from years past. As a result, I’m adjusting my plan for this PTQ season ever-so-slightly.

Why does this matter? It actually has a huge impact on my typical exit strategy pre-rotation. Normally, I’m stocking up on quality uncommons to dump before they rotate, and this year is no different. However, since LGSs are now controlling PTQ’s, many events don’t have any dealers separate from the TO, and the ones that do have considerably fewer than what I’m used to. This means dealers aren’t forced to compete with their buylist pricing, and you don’t see the inflation that we normally do for “last minute needs” like Dismember or Inquisition of Kozilek of years past.

Looking over the buy lists, we see that the vendors have seriously devalued their rotating cards, likely because they’ve experienced this trend in the past. They did, however, have extremely high buy prices on many Innistrad Block cards. Some of this may have been tied to an up coming Block Constructed GP in my area, so I’d be curious if others have seen this in their stores.

I ended up dumping over $100 in rares that I would typically consider to be bulk, or very close to it, at anywhere between $0.25 and $1 a piece. Some included unusual cards, like , at $1, and at $0.50. If you plan on visiting local PTQ’s see if the TO will give you contact information for any on-site vendors, and you may be able to scour their buylist in advance.

What to do with rotating cards then?

I plan on bringing my stash with me to the Grand Prix next weekend, and doing some serious buylist grinding, but that’s not always an option. The other outlets include the obvious: EBay, MOTL and local dealers. Typically, we see the peak of price points early in June, so I’m going through my speculation stashes, and preparing for the cash-out. I spoke to former QS contributor Stu Somers, and he’s already moved his things out, fearing announcements of M2013 being detrimental.

In my opinion, it’s best to wait another week or two. If you have some particular cards that have especially spiked, then sure it’s time to get out, but if not, you do stand to lose some value by not waiting a week or two. We still have a Standard format that is adapting to Avacyn Restored and the PTQ season is just starting to get rolling. There are still openings for Scars Block cards to shoot up, and I don’t want to dump my stuff in front of that. If the GP doesn’t bring good options this coming weekend, I’ll be shooting for the second weekend in June. 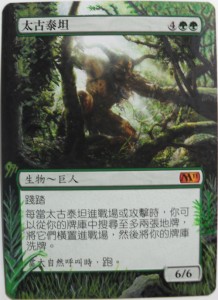 I have a local dealer here, who I know would easily take everything I needed to dump, but I may give the EBay route a go myself this year, to try and maximize value out of my pieces. If you choose to go this route, I would start early and get a good template for your postings ready to go. The tough part is deciding if there will be cards that you need for PTQ season before the purge, so do your best not to lose value by dumping cards you may need later. Key cards on the chopping block for me are Scars Duals, Titans, M12 Duals and also rotating Planeswalkers.

Scars Duals will continue to be extremely relevant throughout the Summer, so those could be held for a bit longer if needed, but upon rotation they're going to fall dramatically. Being poor options for formats like Commander and Legacy, only fringe play in Modern will keep these around $2 max.

The Titans are a big one. They see minimal to non-existant play in older formats, and yet they dominate the current Standard. They'll maintain their higher prices as G/R Ramp is all over the place. As soon as the season ends these will plummet, so don't miss out on the opportunity to get out now. While [card=Primeval Titan]Prime-Time[/card] is a Commander Staple, the others will likely fade to bulk Mythic status fairly quickly. In this category I also want to include cards like Elesh Norn, Wurmcoil Engine and Massacre Wurm. These should maintain some amount of value, mostly for Commander, but also for Modern and Legacy. I think you'll have a chance to pick them up cheaper if they turn out to be relevant in the future.

Most of the rotating Planeswalkers are not very exciting at the moment anyway, but I'm looking to dump all of them. Based on a spoiling of a Chandra themed card for M13, we can assume Chandra will come back and fall even farther down the price line, while the remaining Planeswalkers are going to decline whether they are reprinted or not, as none of them see play in older formats. The two exceptions are Tezzeret and Gideon. Tezzeret, Agent of Bolas is essentially only played in older formats, so I don't expect it to shift in price much. While Gideon, if not reprinted, will make occasional appearances in Modern and Legacy so should end up around $5, at which point, I might like to stash some. If it is reprinted, it may see a slight drop, but likely will stay in the $6-10 range.

The Core Set Duals are either going to see their fourth printing, or they will rotate. In either case, they certainly aren't going up. Any that are currently holding any value should be sold, any that sit at low prices can be held for a brief spike if they appear in a Standard deck this summer.

Should any of the above see reprint, you can likely get back in after PTQ season at the same price you got out. Next week I’ll give my report from the dealer scene at GP Anaheim, and give an update on what price points I’m looking to hit with the cards I’m dumping. I’ve also heard of people dumping their Innistrad duals due to fears of Shockland reprints, or other out-classing lands coming in the Magic 2013.

This doesn't mean you give up on all of your speculation for Standard. You still want to keep the diverse collection of a handful of cards discussed over the last couple weeks, so as trends change throughout the season you still have the opportunity to capitalize. Having a few positions that will benefit from various types of changes almost guarantees that when the format next shifts you'll have some sizable winners. We want to dump the stuff that is certain to face huge losses, but still leave ourselves in a position to gain when the next deck appears.

One thought on “Insider: Prepping for Rotation”