This past weekend I had the pleasure of attending Grand Prix Anaheim, and I had a blast. After failing Day 1, I entered the Legacy event day two with my friends Maverick deck. The deck did what it was supposed to for me. It beat the other creature decks and it lost to the combo decks. I’m sure with some more experience with the deck I could have made the combo matchups look a little better, but it was a really fun weekend overall.

While chatting it up with some of Southern California’s Legacy guru’s there was one common thing I heard amongst the top notch players. “They’re going to have to ban Show and Tell.” After returning home from the Grand Prix, I stopped by my LGS to return some cards I had borrowed from the gang at the shop, and the Legacy players around the shop were all muttering the same business about Sneak-n-Show. While our local Legacy events are small, the Sneak-n-Show player hasn’t lost a match since Griselbrand was printed. At our small metagame, things shift much slower, as not everyone has access to a secondary deck option. Now, don’t get me wrong, I’ve heard banning rumors like this before, and it doesn’t always materialize. Bannings, however, are big in the world of speculation, so let’s try to find some ways to hedge against either outcome, without risking any losses.

Suppose they ban it?

Well, if they drop the hammer, we can assume the price of Show and Tell will plummet. If I owned any i wasn’t 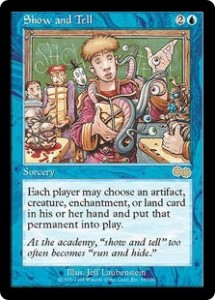 playing with I’d be looking to get out of these. The counter argument to this, is there’s still time before a banning announcement, and it could see a brief spike before then due to it’s strength. If it was me, I would be moving them out immediately. Sneak Attack as well. Without Show and Tell this card just isn’t good enough to see play.

Other than saving potential losses, what else will change in Legacy? Show and Tell decks (Both the Sneak Attack and Hive Mind varieties) prey on decks like Maverick. Maverick is a grindy mid-range deck that gained huge popularity as a way to combat Delver in Legacy. Maverick can grind out almost any creature based deck, and has a variety of tools to protect their team of utility and hate bears. Maverick would undoubtedly shoot back up in popularity as the predator disappears. I like investing in Maverick pieces now.

Here’s the rub. If there’s a banning, they’ll likely pick up some value and popularity which is an easy win. If there isn’t a banning, Maverick doesn’t run much of a risk of declining. Even if the best deck is Sneak-n-Show or Hive Mind, the fact is, lots of people like playing creature decks, and Maverick will still crush most of them. I don’t think we’ll see a decrease in cards like Knight of the Reliquary or Mother of Runes, but they don’t stand to gain too much either.

The card I like investing in is Scavenging Ooze. While there’s a risk we see a reprint in another commander set, this card is a house in Legacy, and even with a 2nd run of Commander prints, there simply isn’t enough of these to go around. It’s currently a $40 card, but I would not be surprised in the least to see this hit $60 or higher by the end of the year. I’d also like to see a move on cards like Enlightened Tutor. It supports the sideboard of Maverick decks as well as Counterbalance, which are key decks in what this format would look like without Show and Tell.

Because bannings aren’t immediate, I expect some of these shifts to start happening right away. After talking at length with some Sneak-n-Show players, the best answers to their plan are hand disruption. Specific cards mentioned are Hymn to Tourach, Thoughtseize and Vendilion Clique. While Hymn isn’t a great speculation target, it might mean Eva Green or Team America are decks that may have some strength against Show and Tell, and are worth looking into.

The key pieces of Eva Green that make it good against Show and Tell are the ones mentioned above. Thoughtseize is already nearly a $30 card, and I’m personally not willing to gamble that it will see a rise. On the other hand, the deck has access to two cards that do have room for growth. Pernicious Deed is about $4 below its highest value, and while not the card that specifically answers Show and Tell, gives the deck a way to deal with early threats like Delver of Secrets // Insectile Aberration and Nimble Mongoose, among others.

Another card in Eva Green that has potential to jump a significant amount is Sinkhole. Playsets can be found around $80 of the Unlimited variety, and closed auctions on EBay seem to be somewhat scattered. As a card that never made it out of the Unlimited set, this card has potential to see much higher prices than it does now, the question is, will Eva Green be a deck again? I see little risk in moving in on Sinkholes, as they don’t stand to lose much value in either case. 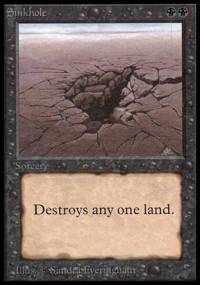 While many of the most recent versions of Team America haven’t been using Vendilion Clique, it’s ability to respond to a Show and Tell and hose the Sneak-N-Show player is big game. Clique has already drooped back down from its Modern speculation spike, but it still sits relatively high compared to its historical pricing. I still think it has room to climb, as people are hanging on to Modern stock for next year. Stifle is another card from this deck I’d like to look at. It’s mana denial, it’s tempo, it’s versatile. It not only appears in Team America as a cornerstone of the strategy, but also in the other tempo deck in the room, RUG Delver. I’m actually kind of surprised Stifle isn’t already at $20 the way things have been going in Legacy.

Next week I’ll have updated news on my rotation sale. What other cards stand to lose or gain from a banning of Show and Tell? How else could the format shift if there’s not a banning?

7 thoughts on “Insider: Sneak-N-Show and the Future of Legacy”