Avacyn Restored appears to be a huge success. What am I basing that judgment on? The fact that Avacyn Restored booster boxes are pre-selling now for $110 shipped!

Why is this so relevant? Normally, boxes of new sets pre-sell for in the $90-$100 range. While this only represents a 10% difference from the norm, this difference is magnified by the nearly infinite supply of Avacyn Restored booster boxes on the market.

In other words, when a supply is virtually infinite (one could preorder many, many boxes and there would be many, many more left), the price shouldn’t really move with demand. But clearly the price is moving. Hence, demand must be very high.

This is a set with great casual appeal and sufficient tournament appeal. I’m torn between buying a box to hoard for profit or buying a box to open for all the Angels. I suppose I could always buy two…

It’s easy for MTG speculators to lose sight of the big picture. We continue our wheeling and dealing seeking out arbitrage and other profitable opportunities on the World Wide Web. We are often oblivious to the subtle undercurrents driving the entire game forward.

We have all heard statistics like “Innistrad was the best selling set ever” and “Magic is larger now than ever before”. These are likely true, but there are more quantifiable results shared with investors every quarter when Hasbro reports earnings.

Turns out Hasbro as a whole isn’t as healthy as Magic: the Gathering is. Here's a quote from the business section of www.LATimes.com:

Big summer movies such as “Battleship,” “The Avengers,” “Amazing Spiderman” and “G.I. Joe” – and the packaged toys that will be sold with them – can’t come soon enough for Hasbro Inc., whose financial situation soured in the first quarter. 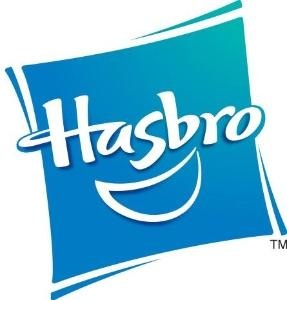 Even though brands such as Magic: The Gathering did well, Hasbro’s games business slumped 9%. The resurgence in interest in My Little Pony couldn’t keep the company’s girls category from falling 18%.”

This does not sound like a growing organism. In the world of Magic: the Gathering, Hasbro is performing like an outdated Legacy deck – there are plenty of powerful cards in the deck, but overall the deck has fallen out of favor in light of more competitive ones.

I want to add one more quote to provide that elusive statistics on how strong Magic: the Gathering truly is right now, courtesy of www.wallstcheatsheet.com:

Felicia Hendrix – Barclays Capital: Moving on to Games and Puzzles, are you continuing to see a bifurcation in performance? In other words, how did the mega brands do compared to the rest of the business? I know you highlighted some aspects that were strong but just in general?

Again, I think where you have the major innovations, we are seeing those brands doing very well. Obviously, BATTLESHIP is up year-over-year, MAGIC – THE GATHERING, is performing exceedingly well, up probably nearly 40% in the quarter.

There you have it – Magic: the Gathering is truly growing rapidly on the back of tremendous product.

Another Interpretation of These Results

I’m clearly not a Wall Street Analyst. I do possess some perspectives, however, that many Hasbro Analysts cannot begin to comprehend. Simply put, they have not made profits by observing pricing trends within the game of Magic itself and they have certainly not played the game for fifteen years as I have.

From my perspective, the successful expansion of Magic: the Gathering has stemmed from a few different channels.

First and foremost, casual appeal has dramatically increased with recent sets. Since players normally enter the game of Magic in the realm of casual play, this is where we see incredible growth in player base. As [unfortunately] popular the Twilight series has become, it is readily apparent that people enjoy a horror theme laced with Vampires and Werewolves. A theme around Angels and Demons in Avacyn Restored will be equally as popular.

Second, the expansion and revamping of the tournament structure has become a positive change for the MTG Community. There are certainly aspects that people haven’t fully embraced yet, such as the Planeswalker Points system, but, overall, the significant increase in Grand Prix, the elimination of the ELO system and the introduction of live coverage at major events has all made the game a spectator sport of sorts.

Players will live the thrill of the Pro Tour first hand and this will drive interest in the game. 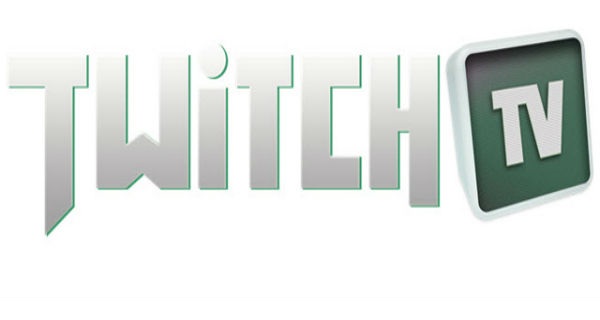 Third, I see thriving tournament formats. Standard is the most popular constructed format and the diversity driven by recent sets has made the tournament scene a popular one. The introduction of Modern, an eternal format with “true” diversity not dominated by Force of Will and Brainstorm, has also driven tournament attendance.

Finally, with all this increased popularity and demand for cards, prices have become volatile and have yielded significant profiting opportunities. This last observation is perhaps more an outcome than a factor, but the end result is nevertheless there.

Partially driven by the mythic rare, and partially driven by increased tournament play, the value of singles on the secondary market has increased significantly. Sets are introduced with $40-$50 cards in them versus the $20-$25 cards which dominated financial conversations years ago. This has made booster packs more like lottery tickets, and, as many gamblers know, this is an addicting characteristic.

The result is the increase in booster packs being opened, which further drives Hasbro’s sales. As for older cards where booster packs aren’t readily available, the price of singles have developed the tendency to shoot through the roof once demand is sparked.

Once this demand is sparked in cards (and recent calls) like Personal Tutor and Food Chain, prices shoot up yielding profitable opportunities (charts courtesy of blacklotusproject.com). 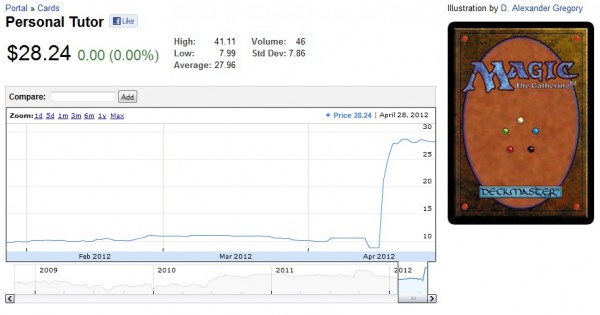 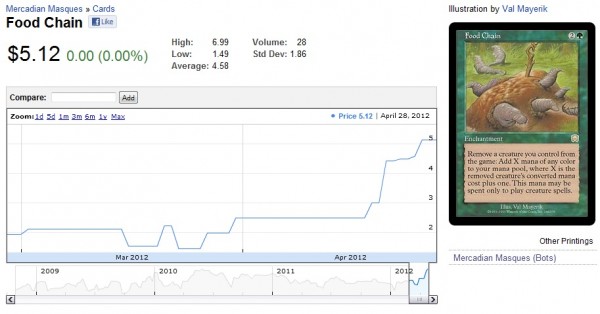 The conclusion I draw from this review is elegant – we are largely profiting on this collectible card game thanks to Wizards of the Coast and, in tur,n Hasbro. Their dedication to growing this game has ultimately created profitable opportunities on the secondary market. For this, I thank them.

While Hasbro’s health may have historically been uninteresting or unimportant to you, I would strongly recommend taking greater interest. As a large corporation they will not make many sudden changes, but should they experience headwinds you can be assured they will slowly shift strategies.

If we seek to continue our profitable endeavors in the world of Magic, we need to make sure the game, Wizards of the Coast and Hasbro are all healthy. This enables the R&D money required to invent new sets that sell and money to invent new tournament structures. This, in turn, creates demand for cards and thus higher card prices for us to capitalize on.

Next time Hasbro reports their earnings, take a close look at how Magic: the Gathering is performing. It may not impact you in the short term, but understanding the financial health of the driving force behind everything we do in this game would be good background to have.

5 thoughts on “Insider: When Hasbro Profits, You Profit”