More and more and more spoilers! Magic 2013 is shaping up to be a pretty awesome looking set, in my opinion. Each day as the spoilers release, I’m more excited to start cracking these packs and building pre-release pools. Since last week, we’ve gotten some pretty exciting cards to talk about, so I’m going to jump right into it.

I have no doubts this card will appear in Standard with an outside chance of making Modern lists as well. SCG has preorders at $20 already, and I’m just not sold on it at that price yet. While I don’t think it’s unreasonable, I have yet to see what decks will do with this and I’m not sure if it is going to pick up steam prior to rotation. If it makes it into competitive decks, $20 is about right.

Now here’s one I’m on board with. Currently pre-orders at $3.99, and at that price it’s a gamble, but it’s one I’m willing to take. Lands that have a non-mana effect on the board, while still tapping for mana are very strong in a vacuum. This land does have a few bad things going for it. It comes in to play tapped, and only taps for colorless mana. But an instant boost to your attacker the turn it enters (and every turn thereafter) will at a minimum be an exciting casual card, and I’m willing to gamble it sees its way into constructed and hits values around $6. 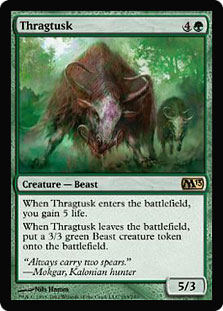 This card is guaranteed to see play. Unfortunately, at least in the short term, it’s likely to be a singleton in most decks like Pod or Wolf-Run Ramp. After rotation, however, this card could potentially shoot up a bit higher. The $6 pre-order price is fair, but not something I expect it to trade at until later in the year. Keep your eyes on a dip in this card late in the Summer so you can make gains when it climbs back up. 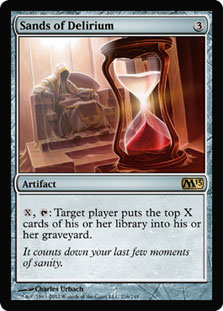 This is one of the best non-combo (Brainfreeze, Grindstone) mill cards in quite some time. I think the current pre-order price of $0.99 is too low, and this is thus far the only card I’ve personally bought at pre-order pricing. The risk here is legitimate, however. The problem with this card is Nephalia Drownyard. The fact that a U/B control deck would love this as a finisher that requires a minimal mana investment upfront, and the rest can be mana-sinked at the end of the opponents turn.

Whether or not this is needed in addition to Drownyard, is the question. Drownyard doesn’t require any mana upfront, and applies the same strategy (albeit more slowly) to win. My gut reaction is no, but if a deck appears that doesn’t want to be U/B this card is the ticket. I’m also fairly confident in this card maintaining a value around $2 simply due to casual appeal. 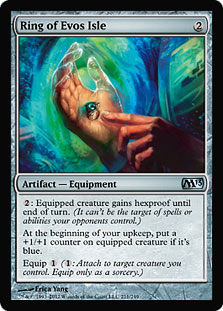 Separately from the rares, there are a couple Uncommons I’m interested in. Obviously, Rancor is on everyone’s radar, and stashing them in longboxes is wise (as well as digging up old copies). Many are assuming they will fuel a new Infect deck, and that’s certainly a possibility. There are very few cards that are high ticket items to worry about, but thanks to Sven’s data in the forums, we can see that SCG has bumped up their prices on the key cards in that deck in anticipation of people trying to revamp the deck. But the other card I’m curious about is Ring of Evos Isle. The pre-order price is a paltry $.49, and this card could very well make its way into multiple formats. It’s an interesting card that I’m not sure how to evaluate, but I think the time frame to make a decision isn’t too urgent. All the same, keep your eyes on it.

I’ve recently been shown mtggoldfish.com and this site is an amazing resource for MTGO speculators. You’re able to construct some pretty awesome trend graphs for various cards as well as entire sets overall. One thing I picked up on after my first peek at the site was Gideon Jura. I expected him to see a spike this Standard season, and even though he’s now seeing play, his paper price hasn’t moved much. However, on MTGO, he’s climbed over 25% in the last couple weeks, as has Tamiyo, the Moon Sage. This is despite the fact that they’ve fallen back down a ticket or two since their peak a couple days ago. I plan on using this resource more and more as time goes on and I get myself more familiar with speculating on MTGO.

Some cards have moved and I haven’t yet figured out why. Vedalken Shackles, for example, has seen a spike in price. Modern season is no where to be seen, and Legacy isn’t exactly a huge format on MTGO. I’ve seen Shackles in Mono-Blue control decks in Legacy, and shockland fueled Caw-Blade and mostly blue Faerie decks in Modern, but I’m not certain what is happening here. Vindicate also saw a huge spike in it’s regular printing, but a drop in its promo, and that one can only be attributed to Legacy, so either Legacy is simply getting more popular on MTGO, or we’ve got some new decks appearing or gaining steam. Keep your eyes on that site, and I’ll be revisiting it and MTGO more frequently in the future.

The season’s banning announcement is next week, and there’s no scarier time for a speculator. A few weeks ago I talked about Show and Tell, how it’s potentially on the chopping block, and what that might look like. What about Standard? I hear lots of calls for a nerfing of the U/W Delver deck, but I really don’t expect to see it. Some have rumored a banning of Snapcaster Mage, and as someone who still owns multiple sets of that card, I’m hoping (and confident) that won’t happen.

If anything, we’ll see either Mana Leak or Delver banned, as they really don’t damage too many other decks or strategies. I also don’t expect this to happen. Rotation will solve the Mana Leak problem, and there’s actually a reasonable amount of diversity between R/G Aggro, Wolf-Ramp, Naya Pod, and the two different U/W variants (Delver and Midrange). While playing against Delver decks feels like an uphill battle, we’re in a mature format, and yes, there is a best deck. It’s not impossible to combat, and attendance at Standard events hasn’t been much affected.

Next week we’ll talk about any bannings if they occur, hopefully get the last of our spoilers and start preparing for the remainder of the Summer of Standard.

5 thoughts on “Insider: Deeper into the Core”