In April of last year we saw Mental Misstep shake the roots of the Legacy format and lead to an extremely rapid banning. At the time, we looked at how it would affect Legacy and made some pretty sweet predictions regarding Aether Vial (among others). Now that spoilers from M13 are warming up, I see two fan favorite Legacy decks gaining some pieces, and Aether Vial could be a winner. And it’s not the only one.

Aether Vial, currently under $9, is lower than what it’s growth chart would indicate. If it followed similar growth patterns to other Legacy staples, it would be sitting at a solid $12-15. I’m expecting a fairly rapid climb up to those levels due to an increase in play from two key decks: Goblins and Merfolk. Both got new pieces from Magic 2013, and even if they don’t prove to have lasting power in the format, they will be seeing increased play in at least the short term.

Wasteland is another card on my radar. It’s on a dip right now, and is seeing tons of play. I expect decks to shift towards this card even more as they try to counteract BUG Control, Sneak and Show, RUG Delver and others. Further, the Aether Vial decks typically play Wasteland, so if they see increased play, Wasteland will also. 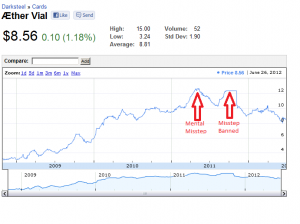 Legacy Merfolk gets a new and improved Lord of Atlantis in the newly spoiled Master of the Pearl Trident. We’ll now see virtually 8 Lord of Atlantis in a Merfolk deck, and I wouldn’t be surprised if Augur of Bolas sneaks in U/W versions that play Swords to Plowshares. Without having to play Phantasmal Image, Merfolk picks up a little consistency, and an actual strict improvement over the older Lord itself. A deck like Merfolk maindecks enough disruption and a fast enough clock to put up a decent fight against both varieties of Griselbrand decks.

Further, Phantasmal Image can’t wear an Umezawa's Jitte, and having easy access to cast Force of Will is about the best defense to combo that Aggro decks can get. Merfolk is otherwise a fairly inexpensive deck, so if it does pick up in popularity, players will flock to it. The only other card that may see some increased demand is Wasteland, especially considering it’s played in many of the decks in the format already, and is a decent way to combat Sol Lands. I could see this climbing back to $45 again.

Goblins pick up a card in Krenko, Mob Boss. I’m not certain this card will make huge waves, but it seems like a pretty sweet card to sneak in via Goblin Lackey. It has great synergy with Piledriver, and is a sizable body on his own. Goblins won a StarCityGames Open just a couple weeks ago, off the back of Cavern of Souls. This deck is for real. Even without Krenko, the deck is strong, but I can see him being a strong addition, even if only one copy. Again we have another deck that features Wasteland. Goblins has a decent game against Show and Tell decks, and can put a scary clock against most of the format. Rishidan Port is strong against both Ancient Tomb and City of Traitors, and access to Red Elemental Blast gives them some protection post-board.

This is another card I want to talk about today. Thundermaw Hellkite is a 5 mana 5/5 flier, that has haste, and taps all opponents fliers while pinging each of them for 1. This card will undeniably be played in Standard, the only question is how much. Not a large variety of decks can play something like this, but it can swing a game pretty quickly. As a top end to an all-in red deck, it’s a bit expensive, but likely an inclusion. But as a mid-range or control finisher, this card is dangerous. Mark Rosewater said he wanted a Dragon at the level of Baneslayer Angel, and I think he found it. I don’t think it will see the heights that Baneslayer did, but would probably float around $15 indefinitely.

This card is already $14 based purely on Commander play, and in a Standard Format that has Mana Dorks, Primeval Titan and Solemn Simulacrum, I expect this card to be in high demand, especially early on before many are opened. Sitting at Mythic Rare, this will be a $20 card in the early times as Commander folks will be hard to give up this staple from their deck. Longer term, I expect it to only be just barely higher than it’s current price, between $15-18.

This card seems pretty spicy to me, and pre-orders for $3. I don’t know that it will climb much higher than that, but if it sees any serious play, I could see it jumping up. It’s certainly a gamble, but it’s one I’m considering. I envision sacrificing a Geralf’s Messenger to this guy for maximum value.

Out of the newest spoilers, which ones are standing out above the rest? Any sleepers that we haven’t talked about yet? I’m really looking forward to the pre-release, and a new spin on both limited and constructed.