There's a lot to Magic that's worth cash beyond just the cards themselves. There are promotional items, oversized cards, optional expansions and more. While you and I don't chase these things down most of the time, there are collectors who want these items and they're willing to pay some serious cash for them. This week, we're going to look at good trade-worthy items in Magic that are not strictly legal things in themselves.

Planechase is an optional expansion for Magic. The Planechase 2012 set came out recently, so you probably know a little about it. In short, people make decks of planes that they use alongside their regular deck. It's a fun and casual sort of thing. The whole collection of Planes, minus the one I'm about to talk about, retails for about $120-140. That's a bit of cash, but it's a serious ordeal to actually get those cards assembled. The one that's worth looking out for, especially because it's hard to find in trade binders, is Tazeem: 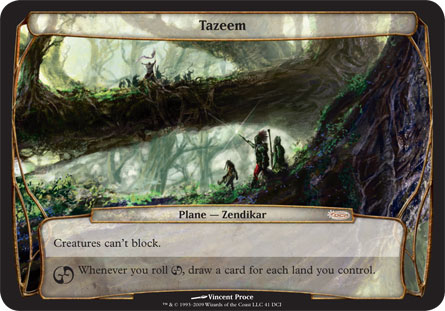 It's that second line that you really care about. In Planechase, you have the possibility of rolling a die and activating that ability. The more mana you have, the more rolls you can make. Later in the game with enough lands, you're pretty locked on being able to roll a die and get that super-draw. You might see 8+ cards from the ability, which is pretty good for Planechase.

Tazeem was a promotional card and wasn't available in any of the precons. Thus, the price of the card is directly related to the fact that most people forgot about their Tazeems when they got them or lost them. This sort of thing happens more than you'd think. In other games (Fantasy Flight's line comes to mind), they occasionally release little promos with convention goodie bags - those promos, which sometimes are no more than a few extra item cards, can fetch $100+. Tazeem isn't that expensive, but it does go for a cool $35.00 on eBay. I don't think you'll get many Planechase cards in trade, but they're great to look for if you're scouting out collections to buy.

Vanguard was, like Planechase, another alternate way to play Magic. Instead of making a deck full of cards that you'd randomly planeswalk into, though, you could choose one Vanguard and have them act like an Emblem on the battlefield. It would affect your starting/max hand size and life, and the better ones usually really punished you on those two factors. Several sets of Vanguard came out, and the sets tend to go for $20-30 apiece. Completed sets of all of Vanguard go for over $200. This is all despite the fact that I've never seen someone actually play Vanguard. The superstar of Vanguard, though, is Titania: 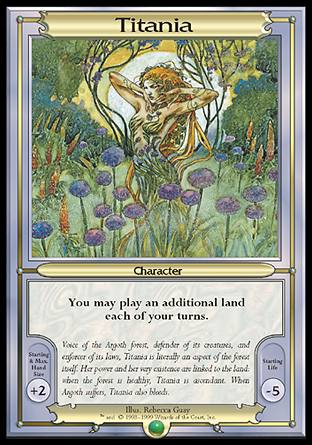 So you get to start with Exploration in play AND you get two extra cards! No wonder people want to play with Titania. I can't think of a deck that would rather have any other effect, be it the token-making of Sliver Queen, the recurring monsters from Gix or the No Mercy effect of Ashnod (and all of those are $10 Vanguards). Titania is so insane, who cares if you get 5 less life? Again, this is a card that you're going to see in collections instead of binders, but it's worth keeping an eye out for. Titania readily sells for $45.00 on eBay.

For about a decade, Wizards of the Coast would print the World Championships decks in collectible form. They had gold borders and non-standard Magic backs. To everyone, it's apparent that they aren't legal Magic cards. However, they are playable in a sleeve and a lot of EDH groups and casual circles will allow the gold-bordered cards to creep in. After all, why pay $240 for a set of Force of Wills when you can get a stack of gold-bordered ones for much less? Despite being unplayable in tournaments, these cards command a non-zero value.

Most gold-bordered playable cards tend to be worth about $1-4. There's a threshold where they tend to be worth significantly more, though, and most are valued at about 20% of their real value. So a card like Force of Will still sells for $10 in its golden format. Cards like Gaea's Cradle have been creeping up near $13 or more lately because everyone wants them for EDH and nobody wants to buy the regular version. Since it's on the Reserved List, the gold-frame card is the only discount you're gonna find. People tend to have these kinds of cards in their binders and it's worth seeing what they'll let them go for. Wasteland, Force of Will, Rishadan Port, fetchlands and more can go for $5-$12. These are another literal gold mine in collections if the person had the right promotional sets.

Duelist was the official Magic magazine and it was a heck of a read. It was around for the first few years of Magic and featured behind-the-scenes interviews, set building articles and the killer decks of the day. It invented terms like "moxen" and "Mr. Suitcase." Duelist folded, like Scrye and Inquest, when the Internet killed slow magazine-format Magic writing.

Duelist also ran promotions, and one of the most interesting ones was for an abacus that you could use to keep track of life totals. Back at the beginning of Magic, people would use d20s, flat marbles, pen and paper and more. There were no spindowns or tracking apps. The abacus was, and still is, a very cool way to track your life total; I'm surprised that nobody has recreated it. Here's what they looked like: 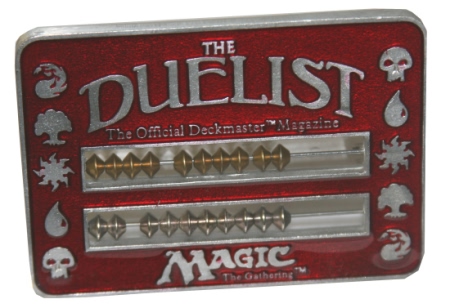 They came in all the colors of the mana; this one is red. Duelist made and sold these for awhile, but when the magazine disappeared, so did the abaci. You could get these for $20 on the secondary market for a long time, but demand has gone up and nothing has risen to meet it. These sell for $65-75 on eBay right now, with fierce bidding. This is a real gem to find in collections; I've seen otherwise-terrible collections with three of these in them sell for 200+. Definitely an item to keep an eye out for.

Squirrels on your Mat 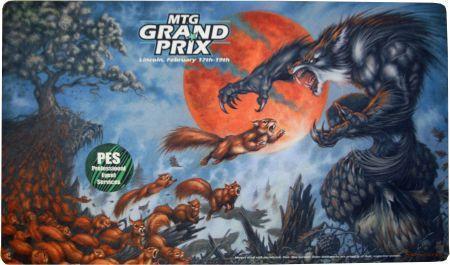 No, not werewolves, squirrels! This is a well-known expensive item, but it's worth mentioning anyway. These had a price high at about $125, but they've settled down to about $70 on eBay. That's still an absurd amount for a playmat, but I think it's a fine reward for someone who had to travel to Nebraska for a weekend to get it...

That wraps up my brief tour of the ephemera that surrounds Magic and that you can sell. If you know something that I missed, chime up in the response thread! While misprints are a well-known and mostly-misvalued treasure, so are these sorts of things. They are the marshmallow center that makes a boring collection amazing; they are the gem in the store's junk bin. Happy hunting!