GP Columbus has come and gone. Most people who attended already summarized their visit in the past week. I decided to de-prioritize my summary in favor of the Behavioral Economics discussion, which I believe was a well-received decision.

That being said, I did have some experiences and observations at the GP that I want to at least touch on. Some cards were easy to sell to dealers, while others were surprisingly cold. While my performance was solid at 5-3, it wasn’t necessarily anything worthy of words in this space. Therefore, the second portion of this article will be geared towards an observation Corbin has already touched upon along with a surprising exception or two.

Entering the Grand Prix doors in Columbus, I had one financial objective in mind: to sell off some of my Alpha cards for profit. A few months before the event I developed a fascination with the scarcity of Alpha rares and the recent increase in buy prices that Star City Games had implemented. While everyone was drooling over Kiki-Jiki, Mirror Breaker (which I’ll return to later) and other Modern stars, I was busy acquiring Alpha rares – even played copies – for as cheaply as possible.

Prior to the event, I had spent well over $700 on Alpha cards ranging from Giant Spider to Wheel of Fortune. While it was tempting to continue a collection of Alpha, I realized this would be a costly endeavor and it wasn’t my priority. I have a soft spot for many cards that I wish to hold onto, but Alpha cards did not necessarily fall into this category.

(A purchase I made on eBay leading up to GP Columbus)

I asked many contacts on site which vendor would be optimal to sell the Alpha cards to for maximum value. I even asked a couple of the different vendors for their opinions. Many of them suggested Strike Zone, so I headed to their booth. What happened next was highly unexpected.

I asked the person at Strike Zone if they’d pay well on Alpha cards and they seemed uninterested. There was a man wearing bright yellow sitting next to me, however, who said he would buy them. Turns out, it was Ogre, a guy who had his own booth. Because Ogre played in an “Alpha League”, which I had never heard of until then, he was highly interested in my Alpha.

Twenty minutes later we had just over $500 in deals on the table. After selling a few stragglers to Star City Games (who paid surprisingly well) I had made about $100 in profit from the Alpha cards I sold. I had difficulty moving the graded Alpha cards I bought, but I hope to eventually have some success with those on eBay.

Many of you may not be interested in Alpha, but the point of this story was that profit can be had even selling to dealers. How many categories of cards can you buy from multiple individuals and sell straight to dealers for 20% profit (my average margin). Yet either people undervalue their played Alpha or dealers overvalue them. Either way, there is room for you to profit just as I did.

Another large sale I was pleased with was my SP Revised Savannah. I grabbed the card for $50 on MOTL a month ago and I was bound and determined to sell it for profit. I went from dealer to dealer asking them what they’d pay on the card and the first four dealers offered $50. Not good enough. I finally found a dealer selling their Savannah for $90, much too high. Sure enough they offered $60 on my copy and I snap-sold.

As for other sales, I made a surprising amount of money in selling sub-five dollar cards. I went from booth to booth and was delighted to see how many cards I could sell for just over bulk pricing. It’s a great feeling to get a buck on a card like Intruder Alarm, which sat in my binder for years. And no matter how many cards I sold to a vendor, the next vendor would identify more they wanted to buy.

Equally surprising were the cards I couldn’t move for a fair price. Every vendor offered me a mere eight bucks on Huntmaster of the Fells // Ravager of the Fells!? (chart courtesy of blacklotusproject.com)

I understand the card has been declining in value, but I also feel it should be stabilizing soon. The card has demonstrated its power in constructed play, it’s a Mythic Rare from a small set, and it should be well poised to perform once rotation occurs. Dealers’ lack of interest was unexpected.

The Innistrad Dual Lands also fetched disappointing amounts at the dealer booths. Many offered one to two dollars on them and I know they will be worth more. One dealer even confessed that these cards were likely to jump in price yet he could not offer me a penny more. The charts at blacklotusproject.com agree with the upward trend, which should continue as rotation occurs:

Needless to say, I did not sell many Standard cards at the event. It seems dealers are much more willing to negotiate on older cards than Standard. I suppose this makes sense based on the apparent supply of Standard vs demand, especially during the “Dead Zone”, as Corbin put it.

I wanted to emphasize the validity of Corbin’s observations in his latest article: https://www.quietspeculation.com/2012/07/insider-making-the-most-out-of-the-dead-zone/?ampt=2051172678

Independent of his article, I, too, have noticed the lack of inspiration this time of year. While I feel like Innistrad and Dark Ascension cards such as Huntmaster of the Fells // Ravager of the Fells and Geist of Saint Traft should be strong buys, their price trends do not reflect this. Standard staples like these have been on the steady decline. Even Snapcaster Mage has been hit by this “Dead Zone” (chart courtesy of blacklotusproject.com). 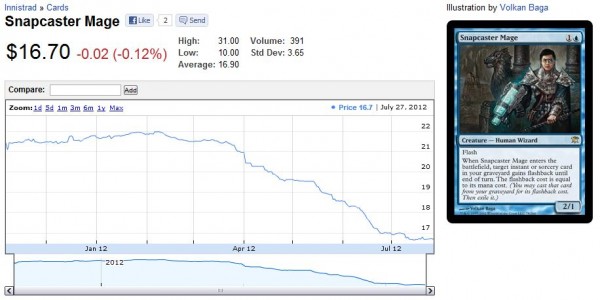 These cards are likely to be impactful in the new Standard and they will be even harder to find once Return to Ravnica is released. Yet, their prices are on the decline and it’s difficult to predict where they will end up. It appears based on their charts that their prices are almost stabilized and I may start buying soon, but not yet.

But just like the stock market, there is always a bull somewhere. Which cards are performing well right now? Take a look at my most recent fascination: Bonfire of the Damned (chart courtesy of blacklotusproject.com): 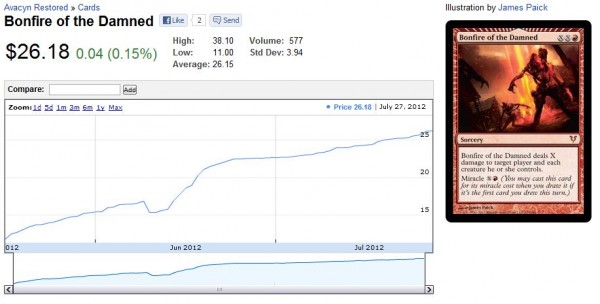 This is a trend I can get behind! And since I’ve been looking to pick up a set of these to play with in Standard, I happen to know firsthand that these cards cannot be found on eBay for less than $30 without ultimate patience. Star City Games is sold out of these at $39.99. Net, the upward momentum on this hot card is still there.

But how high can Bonfire reach? I am having a difficult time answering this question because there’s so little precedent in past Standard formats. When was the last time a red sorcery was the most valuable card in Standard??? Hammer of Bogardan from Mirage? Relentless Assault from Visions? Seriously, if you have the answer to this question I would be very interested in reading your thoughts on this one.

I don’t think there’s a single card in Standard hotter than Bonfire right now. But there may be other buys during this lull in speculation. Entreat the Angels is so powerful yet the card sells for as low as ten bucks on eBay. Innistrad Duals are on the rise yet they have not peaked. But as of right now, there are few sure things in the format.

Once Return to Ravnica is released, Standard will coalesce into a more defined format. Hopefully it will be clear then which cards are all-stars and which ones deserve their downward trend.

Until then, it may be tempting to acquire the Standard cards you feel are viable in the new format. Cards like Snapcaster Mage and Geist of Saint Traft are at all-time lows, and if they are strong in the new Standard they should pick back up again. But if they aren’t, you could lose some significant value. The risk is yours to take in this scenario.

That is why I am moving in on Innistrad Duals, Bonfire of the Damned and Alpha rares. They seem like the cards with the most life in this “Dead Zone”.

In the mean time, perhaps it’s time to dig through my bulk commons and find as many Ponders and other $0.10 commons I can for the next Grand Prix, which will be GP Boston. Hope to see you there!