The announcement of the structure of the new Ravnica block has opened up a good speculative opportunity. The first set, Return to Ravnica, will consist of the Selesnya (G/W), Izzet (U/R), Golgari (B/G), Rakdos (B/R) and Azorious (W/U) guilds. Under the assumption that the Shocklands will be reprinted in the set where the corresponding guild appears, then Temple Garden, Steam Vents, Overgrown Tomb, Blood Crypt and Hallowed Fountain will appear in Return to Ravnica (RtR).

Given the information of the block structure and the assumption that Shocklands will be reprinted within the block, there is a distinct asymmetry which speculators should be aware of. Mana bases for decks that feature the guild colour combinations from RtR will be more robust in Fall Standard than the guild colour combinations from Gatecrash. Also, powerful multicolour cards will be appearing with the RtR guilds.

Having access to the Shocklands and powerful multicolour cards for half the guilds will skew Standard in the direction of those guilds. For a historical comparison, peruse the top 8 Standard deck lists from Worlds 2005, which featured 9th Edition, Kamigawa Block and Ravnica: City of Guilds.

Japan broke out in 2005 as a Magic powerhouse, and their crowning achievement was placing 3 players in the top 8 as well as Katsuhiro Mori taking the title of World Champion.  The breakout deck of the tournament, which all three of the Japanese representatives played, was a Selesnya concoction featuring the token generators Selesnya Guildmage and Vitu-Ghazi The City Tree powering up Glare of Subdual.

Overall, 17 copies of Loxodon Hierarch and 13 copies of Temple Garden appear among the top 8 decks. The cards from the first Ravnica set skewed the environment strongly in the direction of the four guilds introduced therein. We can expect RtR to have a similar impact on Fall Standard.

In these decks, we can also see that redundancy in the mana bases is valuable. Painlands are present with Brushland, Yavimaya Coast and Underground River all making contributions to the stability of the mana bases. From a speculators perspective, this would indicate that we should examine M13 and Innistrad block for attractive real estate.

The core set duals have been printed enough that there is little upside to speculating on these. With Golgari and Izzet returning as guilds, the best bets corresponding bets are Woodland Cemetery and Sulfur Falls. Both cards will work well with their respective guild Shocklands and history indicates that these colour combinations will be over represented relative to the as yet unprinted guilds. Sulfur Falls also benefits from appearing in Modern U/R combo decks.

Applying a similar logic to the various utility lands from Innistrad block, the best bets to see play are Gavony Township and Moorland Haunt, which have both proven to be playable in Standard as well as Modern, where mana bases are robust. Desolate Lighthouse, Grim Backwoods and Stensia Blood Hall each might get some attention in Fall Standard, but they have not proven to be constructed playable as of yet so speculating on these is for gamblers only.

Return to Ravnica and Modern

Looking out beyond Fall Standard towards the Modern PTQ season starting at the end of year, there will be a plentiful supply of the new Shocklands but the same number of the old Shocklands.

For MTGO speculators, correctly timing the purchase of Shocklands has been a profitable endeavor and another opportunity has presented itself. Leading up to the new Modern season, general price inflation will occur for all Modern staples as speculators get on board and as players prepare for the season by rounding out their decks. But this season will begin with an abundance of half the Shocklands, the ones printed in RtR, and a dearth of the others - the ones to appear in Gatecrash.

For this reason, focusing on the Shocklands that are expected to be printed in Gatecrash is the best bet as the run up to this year’s Modern season will occur before the release of Gatecrash.

For MTGO, the Shocklands that appeared in Dissension have the highest prices, followed by Guildpact and then Ravnica: City of Guilds, showing the 3rd set effect well. The biggest swings in price occur for the scarcer cards, so Breeding Pool is the best overall bet, with Stomping Grounds and Godless Shrine in the second tier, and then Sacred Foundry and Watery Grave pulling up the rear.

All charts courtesy of mtggoldfish.com which presents MTGO prices from supernovabots.com. 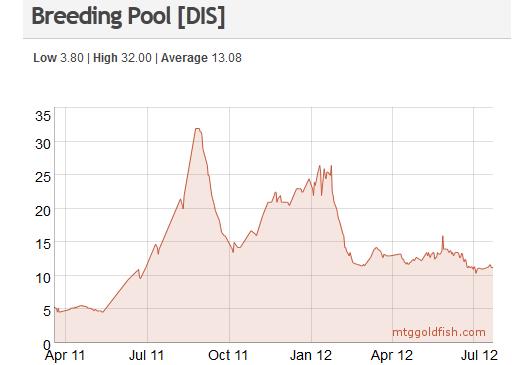 The chart for Breeding Pool shows a strong spike during the speculative frenzy that came with the announcement of the Modern format and then a drop followed by a rise and a secondary peak during last year’s Modern season. For this card, the actual playability of it in Modern matters little as the herd behavior of speculators and the scarce supply will inevitably combine to form a new price spike. Keep your eye on this card or get in now at the Modern era price floor of 10-11 tix, then sell into the market at or near the start of the PTQ season when prices will have risen. 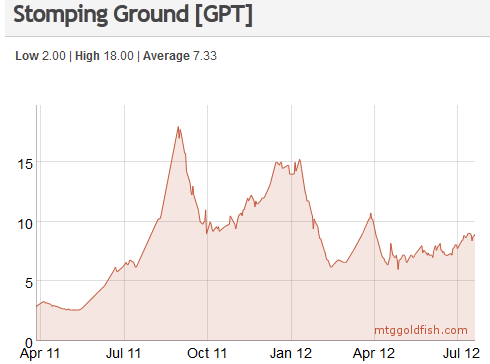 Stomping Ground and Godless Shrine both have similar charts as compared to Breeding Pool, but with less pronounced peaks and lower price floors as one would expect from more plentiful rares. These cards appear in more decks than Breeding Pool, but not in great numbers. Stomping Ground is usually a one or a two of in Jund and Zoo decks, and Godless Shrine makes the occasional appearance in token strategies and Doran decks. Nevertheless, expect price increases to happen for both come November and December.

However, their current high prices of 10-11 tix indicate that upside is limited. Godless Shrine peaked at a little over 13 tix mid season and Stomping Ground peaked at 15 tix. Timing will be crucial to make a small profit on these, but if interest in Modern expands or the metagame shifts to favor these cards, then a higher price ceiling is possible. If prices soften in the Fall (as usually occurs during October release events), then keep your eyes out for prices in the 8 to 9 tix range. At that price, the risk reward ratio is more favorable and both would be a good buy. 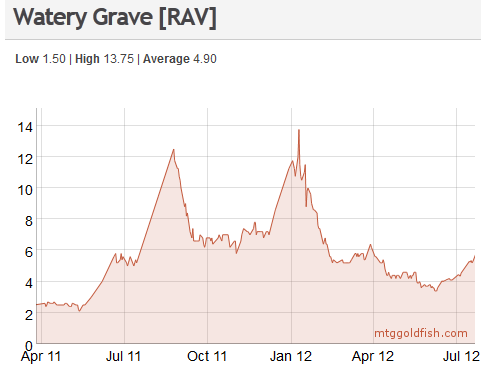 As for the two other guilds appearing in Gatecrash, Dimir and Boros, their respective Shocklands represent riskier bets, so avoid these despite their lower absolute prices. The risk comes from the high amount of supply of Sacred Foundry and Watery Grave in the market, so price moves will be muted in comparison to Breeding Pool, Stomping Ground and Godless Shrine. If you had caught them at their Spring low, then you could have held for a small profit with little risk, but at this point they have risen in price such that the risk outweighs the potential gains.

Again, if prices soften, be prepared to buy. Both represent good value at 5 tix.

The one big caveat to this strategy is the instance that the Shocklands, in fact, do not return, or they return all at once in RtR.

The second possibility is doubtful as WoTC should rightly seek to spread out some of their most popular rares among the block as opposed to frontloading all the Shocklands in the Fall expansion. The first possibility, that Shocklands do not return, is not aligned with their goal of making Modern an accessible eternal format. By reprinting Shocklands, they will bring down the average cost of Modern decks.

Also, as Corbin has hinted at in his ‘Digging Up the Plants’ article, M13 being full of cards such as Farseek (over Rampant Growth) and Arbor Elf (over Llanowar Elves) point to the return of dual lands with the basic land type, i.e. Shocklands.

If you are a dabbler in speculating on MTGO and looking to get your feet wet with a couple of tix, go with Gavony Township and Moorland Haunt.

For those with a few more tix, add in Woodland Cemetary and Sulfur Falls but don't over pay for these! Watch the prices, look at historical charts and try to time your purchases to coincide with lows in the market.

And for those who want to try their hand at pricier positions, go with Breeding Pool. These are the surest bets presented here, and good opportunities overall looking out to Fall Standard and the Modern PTQ season.