How good should a Commander deck be? This is the question I have struggled with my entire Commander career.

I have assembled vastly powerful Commander decks that consistently defeated my opponents with ease, and others that I promptly disassembled in a fury of disappointment after losing several games in succession. Were these all ‘good’ Commander decks? It all depends on how ‘good’ my opponents’ decks were, and this is what I find to be the format’s fundamental flaw.

Commander was initially designed as a fun way to play Magic that involved many friends at once and allowed for unique play. But things like Armageddon and Blood Moon are legal cards. Should you run these cards? They are extremely powerful in Commander, but they aren’t very fun to play against. The problem is that these decisions are made on an individual basis.

A Little Too Broken

Hokori, Dust Drinker is hands down the best Commander deck I have ever made. Can you imagine playing a game of Commander against these cards?

No creatures, no spells, only pain.

What if I [card Mishras Helix]tap every land[/card] you play the entire game and slowly kill you with a few soldier tokens? I had this deck together for only a few weeks before I retired it out of principle. It was the most boring deck to play against ever because absolutely nothing happened, and I won very slowly. Why would I create such a monstrosity? I wanted to see how ‘good’ a Commander deck I could make. The context in which I use ‘good’ here is, “a Commander deck that only cares about winning.”

When someone asks what a good deck in Legacy is, their meaning is, “what deck is best at winning?” What about in Commander? What does a player mean when they ask what a ‘good’ Commander deck is? This is a very difficult question to answer. Obviously you want your Commander deck to be good, but the context is determined by your interpretation of how Commander is meant to be played.

My idea of how a Commander game should end is with everyone being excited about the awesome manner in which they were killed.

“Oh, you finally assembled your stupid combo and won? I’m glad I just wasted an hour on this game of Magic to be killed by such a flavorless combination of cards,” is not what I want to be thinking after a game of Commander.

I would rather be thinking, “It was pretty sweet when my opponent EoT casted Sphinx of Uthuun into Enigma Sphinx which cascaded into Fact or Fiction thus resulting in two FoF sphinxes which he killed me with.” I couldn’t care less whether I lose a Commander game as long as I died in an interesting way.

So, let break down the various tiers of quality that Commander decks fall into.

This is where the ridiculous turn four combo decks and my Hokori deck belong. They play to win and don’t pull punches. “Of course I’ll Wasteland your turn two [card Izzet Boilerworks]bounce-land[/card], I don’t care if you can’t cast spells and don’t have fun. I play to win.”

I have encountered many Commander decks in this category. The players that pilot them are usually competitive Magic players that were lured by how fun everyone says Commander is. Sadly, this isn’t the format for them.

This is usually the work of a player who sucks at building decks, but tries to win in any way possible. An example of a deck in this category would be something like, “Finally, my combo which is the only way I can win finally worked on the seventh game we played.” These decks are pretty infuriating to play against. Either they win in some boring fashion, most likely involving a stupid combo, or you crush them with no resistance.

Sadly I recently constructed a deck that falls here. I had acquired a Lich and was determined to incorporate it into a Commander deck. I ended up with a Savra, Queen of the Golgari deck that occasionally combos off on turn five in spectacular fashion.

These are similar to Quality Competitive, but don’t win quite as consistently. The players that usually build these decks are competitive players trying to play ‘fair’. A deck like this may have a couple combos and a few cards most people scoff at, but overall tries to play to the spirit of Commander. Occasionally I’ll get a good game of Magic against a deck like this.

This is what you get when a bad Magic player assembles every stupid combo and un-fun card he/she has encountered and shoves them into a Commander deck filled mostly with bad cards. Occasionally they will win with their terrible cards backed up by things like a timely Armageddon or Obliterate.

This is the sweet spot, which every Commander deck should strive for.

A deck like this will put up a fight, keep the game interesting, and usually win in a spectacular fashion. These decks typically won’t contain silly two card combos, or boring cards like Ruination and Contamination. They are built in such a way that they react instead of deny and wound instead of kill.

I try to make most of my Commander decks fall between here and Terrible Fun (see below). Current successes in this endeavor include: Kiki-Jiki, the Mirror Breaker, Seton, Krosan Protector, Toshiro Umezawa, Lyzolda, the Blood Witch, Jor-Kadeen, the Prevailer, and Maelstrom Wanderer. 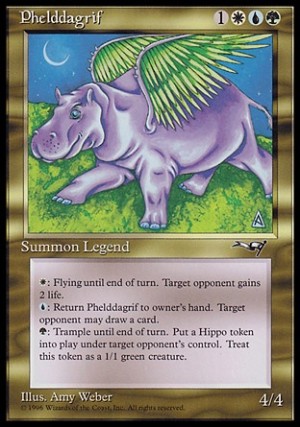 Turns out this guy sucks at Commanding things.

Another good place for a Commander deck. These decks are similar to Quality Fun decks, but not as efficient or stable. While they may assemble a neat combination of cards that lead to an interesting game, they may be left with no cards in hand, so when their shenanigans are thwarted they are essentially out of the game.

These decks are just bad. They contain a pile of terrible cards that were scrounged together from leftover draft sideboards picked up in the local game store parking lot. Most of the time playing against a deck like this is the same as gold-fishing your Commander deck, except it’s easier to win.

We could break this down even further and look at the spectrum that lies between quality and terrible, but you get the idea. The more efficient and better at winning a deck is, the more ‘quality’ it will be.

I have always tried to make decks spread throughout the spectrum of quality, because hey, sometimes playing two garbage decks against each other is fun, and that is what Commander (and Magic in general) is all about!

If playing a Quality Ruthless deck is fun for you, then do it, but be aware that most people don’t play Commander that way. The best way to craft a Commander deck is to build for your play group. If your play group plays mostly lower quality fun decks, then make one too and have fun. If that’s not your forte then you should try other formats.

Some people, however, don’t really have a reliable Commander play group, so it’s a lot more difficult for them to craft a deck they will have fun playing against the diverse spectrum of Commander deck quality.

Working part time at a game store puts me face to face with this situation and leads me to explore varying styles of Commander play. I never enjoy playing with or against competitive and ruthless Commander decks, but I usually try to keep a deck or two in these categories just in case I encounter a foe of this caliber.

Also, if you are ever playing for money, packs, store credit, etc. always play to win. In this case don’t be afraid to bust out the obnoxious deck that crushes your opponents on turn four. But remember, the next time you build a Commander deck think about your play group and build accordingly. Not only should you be having fun, but your opponents should too.

I'm an avid commander player with a knack for deck building. I've played commander since its genesis and have loved it ever since. If you ever want to talk about commander feel free to contact me at ARM7845@gmail.com.

Leave a Reply to The Booze Cube Cancel reply