Hello readers, my name is Gervaise Pechler. Besides being a motivated Magic player, I am a passionate speculator, professional poker player and a Bachelor student in Business & Psychology. I became exposed to trading card games at the age of eight when Pokemon took over the world, following up with Dragonball Z, LOTR, .hack//enemy, Magic: the Gathering and even Pirates. I will be mainly discussing my speculation and trades here in Europe.

There is a lot of Insider information about how to capitalize on cards, which American index to use, which decks and new cards T8’ed in a SCG Open and what price changes occur in dollars. But the Magic world is so much more than that! TCGplayer and StarCityGames are two of the biggest in the USA, but incidentally pose high costs for EU residents due to import tax, currency costs and the longer waiting time to get the actual cards.

I'll be using this first article to introduce you to Europe and Magic Finance. This is largely my view on where to get, sell and trade cards, because Europe has large submarkets like Spain (with its Spanish cards), as well as Italy and Germany. Still, those countries produce, play, sell and buy English cards. I am most familiar with the UK and Benelux (Netherlands & Belgium) market. I am discovering other markets as we speak by traveling and meeting people who can guide me in the right direction.

In Europe, there is no big retailer like StarCityGames that covers the whole continent and organizes big tournaments every week. The stores that I consider "big" are present at PTQs, GPTs and other major tournaments. For example, in the UK, you have Manaleak.com and MagicMadHouse.co.uk, which also covers Northern-Ireland and Scotland. These sites are ideal to pick up under-appreciated cards during the PTQs and by using their buylists. I bought Etched Champions at £1 each, which is a good price for me to speculate on when the Modern Season is starting again.

Most Dutch card websites are based on a community where you can also trade cards with other users. This is particularly great because there is a lot of casual demand, which boosts the prices of cards you probably want to get rid of, anyway.

A prime example would be on Nedermagic.com with Havengul Lich. It is not the cheapest shop but has the most traffic & stock in the country. Havengul Lich is selling for €8 with a buylist price of €3. Black Lotus Project, on the other hand, shows this as selling for $2.64. Getting this card cheap from other markets and trading or selling it away to this website makes me want to participate in ‘community’-based retail sites, since most players will memorize the price at €8, allowing me the uptrade that I want.

Another use of these sites is their up-to-date buylists. There is a bonus when you trade in cards for other cards and a "penalty" if you simply want cash. I can automatically uptrade if I want, because the buylist is huge.

To summarize, these sites are great to trade cards with other players, selling or trading in your cards with the vendor, and utilizing their up to date card prices to supply some underpriced cards from other markets.

Another type of site I frequent is user-to-user marketplaces. The most famous one is eBay, which I used to use a lot back when I was living in the Netherlands. I bought cards from the US and Asia when the Euro was strong and, being very lucky, never had to pay for import tax.

Nowadays there is a European marketplace for Magic players called www.TCGmarket.eu where you can buy & sell Magic, Yu-Gi-Oh, WoW & spoils. It charges a 5% flat fee on every sale you make and the interface is clear and accepts PayPal for instant payment. The downside with using PayPal is that they charge an uncapped fee. It is the classical time versus cost debate. I mostly use this website to search for old EDH cards, still undervalued Standard cards and for looking up if a seller is underpricing his collection so I can actually make a profit.

Let’s use Restoration Angel as an example, as it is a popular card:

Since TCGmarket merges a lot of sellers together, there are common priceshifts. The sellers who offer the lowest prices mostly only have a single copy for sale and are often non-English, non NM. The following screenshot brings one to the page of Restoration Angel on the website: 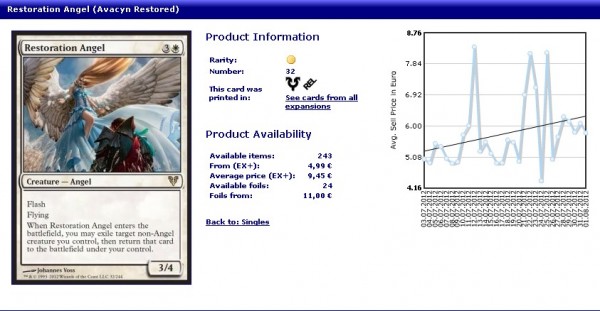 For example, when I want to buy the cheapest Restoration Angel, I tend to look at the seller's other singles to see if I can combine cheap singles with others to ease the shipping cost per card.

Another use of TCGmarket.eu is for when cards are preselling. Several big sellers are offering the cards in presale just like StarCityGames. The advantage the buyer gets is that there is fierce competition between those sellers, so the prices are attractive. At the same time, when a card gets hot during presale, one has to be quick. You can buy up to 16 or 32 copies from a single vendor, which makes it very convenient for me to use TCGmarket.eu over the traditional retail sites.

I tend to avoid sealed products on this website as one is charged with a €20 shipping cost at the very least. Although cheap (Italian Counterpunch sell at €30 while it is $60 & sold out at StarCityGames ), it generally requires multiple units to cover the shipping cost and, even then, I have to put a lot of effort into finding potential buyers to buy from me.

To summarize, user-to-user marketplaces like TCGmarket.eu are an ideal place to find real bargains for direct resell value or to make your trade binder look more enticing. I do not have a sellers account yet, but I tend to only put cards up that are worth selling, which should mostly be cards that I can get more for than if I would be selling it to a vendor directly.

There are also a lot of small internet stores. They are pretty hard to find and sometimes I wonder if they are still operating. If I happen to find one, I usually check if they have the newest set as well. If they have it, they should still be operating.

I primarily use these shops for pure value, which means picking through each set to find underpriced/outdated cards. These small shops are may not use buylists and when they do, they mostly give low price quotes. It is basically grinding through their stock and evaluating whether this Sliver Legion listed at $7.00 is worth more elsewhere.

I am looking to write some more about this as it is a new and exciting experience for me, but know I can improve the methodology.

Finally there is the LGS that I frequent. They have three weekly tournaments, which are on Tuesday (Draft), Thursday (Standard) and Friday (Sealed).

Draft and Standard evenings are less popular and filled with more regulars, who are not terribly fond of trading. When they trade, they just need something for their decks, which I frequently have. It's fine but not a goldmine. 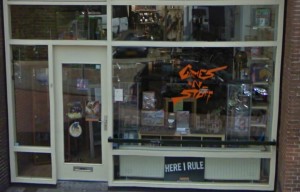 The Friday Sealed event is packed with more casual players as Sealed is considered a steep entry price for most regular players. I typically attend in order to perform trades and establish new EDH connections.

The LGS itself has binders from Lorwyn and the famous ‘2 for 1 euro’-bulkbox. I've found the most interesting cards in these bulkboxes. For example, I've managed to find a foil Student of Warfare and Preeminent Captain.

I know some local game stores have set prices, but I feel these are not set in stone. One can negotiate heavily about the prices and, if all else fails, you can trade overpriced cards in for a free draft or for other cards that they undervalue.

As this is my first article for QS, I would like to have as much feedback as I can to improve my writing and cover topics of interest. I am open to any discussion where we both can learn from as I am continuously perfecting my craft in the Paper Magic world. Thank you for reading.

13 thoughts on “Insider: Across the Atlantic – European Fundamentals”