Gen Con took place this past weekend in Indianapolis and it looks like everyone had a great time.

Sadly, I was unable to attend. When you have many other commitments such as family, work, school, etc., it becomes difficult to stay actively engaged in the Magic Community by going to these premier events. I haven’t even been to Friday Night Magic since before my son was born, almost six months ago.

Staying connected with other Magic players can be incredibly valuable though. The more people you know, the more potential trade partners you are comfortable dealing with, the more rumors you hear about certain cards, and the more you stay on top of card values.

If you’ve read some of my previous articles, you’ve already learned how much of a proponent of Twitter I am. Although it’s not the sole reason, I don’t think I would be writing for this prestigious website today if it weren’t for Twitter.

But I’m jumping ahead a little bit. I’m here to talk the basics.

Step two, follow key MTG finance people. For starters, I’d recommend @mtgmedina, @chasandres, all the finance writers for this site, which can be found on this thread, and some of the active participants in the QS forums.

Perhaps it’s not this easy, but it doesn’t take too much investment of effort to begin reaping the benefits of this digital, public chat room. People are constantly commenting on MTG trends, identifying cards to speculate on, and discussing price changes. If you’re not listening into these conversations, you're missing out on some of the earliest tips for what cards to buy.

For example, here’s a recent conversation I had on Twitter discussing recent pricing trends on Unhinged & Unglued basic lands: 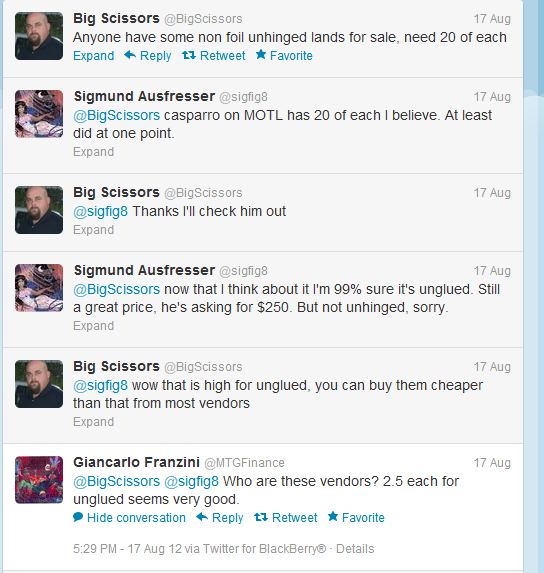 The best part of it all – the information is available no matter where you are and at no cost. Waiting in line at Starbucks? Check your Twitter feed. Slow day at work? Hop onto Twitter for a brief chat. The beauty of Twitter is that there is always new information to read and it’s incredibly easy to voice an opinion, spreading the word. The more you Tweet and get others’ attention, the more networked you will quickly become.

So try it out – send me a Tweet and let me know what you think! @sigfig8

MOTL – The Digital Bulletin Board

Wouldn’t it be nice to have your finger on the pulse of MTG card values, with new information coming at you minute by minute? Some major Magic retailers may already provide this, but their prices are often higher than what you can expect to get for your own cards. There is a better way to learn how cash values of cards are constantly changing.

MOTL, which stands for Magic Online Trading League, is a site that enables Magic players around the world to buy, sell, trade, and discuss Magic Cards. Every few minutes a new list of cards for sale/trade is updated. Here’s the snapshot from this morning:

Signing up for the site is easy, and valuable information can become immediately available. You don’t even need to perform a single transaction to learn about how card values are changing.

How is that possible? Every time someone posts a new list of Magic Cards for sale, other members of the community can post their interest in purchasing said cards. Which cards do you think sell first? The underpriced ones, of course! Sometimes you even see someone undervaluing a particular card severely and there will be four or five posters expressing interest in that same card. This isn’t coincidence – that card’s value is likely higher than the posted price.

On the other hand, some people post prices closer to retail – their threads frequently get no buyers or a handful of lowball offers. The MOTL community is very much in tune with the cash value of cards, and staying up to date with this forum provides you with how others in the Magic community are viewing card values – not just the big retailers.

Finally, it is worth noting that there is a Trading and Value thread in MOTL as well. Although it’s not as… classy… as the QS forums, it still does contain a few tidbits of useful information.

So check it out – you can even view these threads without having an account, so there is no risk to you for visiting the site. And since there’s no FNM’s involved and no need to commit hours at a time to the site, I’m able to actively buy, sell and trade Magic Cards without ever stepping foot outside my door.

Well, except for the occasional trip(s) to the Post Office.

Twitch – www.twitch.tv – is a recent discovery of mine. Through this website, I am able to watch some of the better Magic players duel it out on MTGO live without leaving my home. It’s like I’m looking over their shoulders as they sling their spells and battle for some free digital packs. 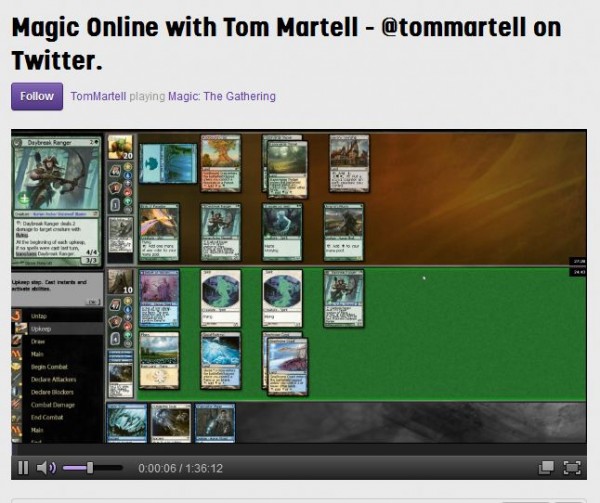 Why is this valuable? For starters, you can check out the different types of decks these well-known players are testing. While still in its infancy, live streaming could be a new way to check out up-and-coming deck strategies the pros are trying.

There’s also the added benefit that you have an opportunity to interact with the pros. Some of them respond fairly well to the chat window scrolling next to their video – a great way to ask about particular cards.

Many members of the Magic community still have the opportunity to attend weekly FNM’s, PTQ’s and an array of premier events. Through this, they are able to network with other players and build valuable connections within the community.

As the game ages, the average age of Magic players also appear to age. Many are getting married, starting families and maintaining a full time job outside of Magic. For these players, like myself, it’s very difficult to attend enough events to build that strong community.

But this doesn’t mean we can’t have one. Through multiple online channels such as Twitter, MOTL, Twitch, Quiet Speculation and more, I am well equipped to not only stay in touch with the Magic community but also contribute something valuable. I’d strongly encourage those of you in the same situations as mine to take advantage of these digital tools, which allow me to fully engage in the game of Magic and stay up to speed on trends.

That being said, attending the occasional Grand Prix can really help strengthen the bonds you make through Twitter and MOTL. There is often no replacement for meeting people in person at a major event, and I’d encourage you to at least attend one or two events a year to strengthen these connections. You’ll be glad you did.

By the way, I will be at Grand Prix Boston this weekend. If you’d like to meet, shoot me a Tweet on Saturday.

Special thinks to Yori Rubinson for this article topic suggestion.