Well, over the weekend, we’ve gotten a full spoiler of the Izzet vs Golgari Duel Decks. What a great way to kick off the excitement into the new block. I’ve been pretty excited for Return to Ravnica already, but after seeing some hot new spoilers, I’m chomping at the bit. As most of you have hopefully seen, Sigmund has created an awesome spoiler update page, that is constantly updated with any new RTR spoilers, so bookmark it!

This week we saw a few cards, but the most exciting one to me is Izzet Charm. This card is exactly what the Izzet mage wants. It’s cheap, it’s a counterspell, it’s removal, it’s card selection. This card is versatile enough that I envision a variety of strategies arising that can employ this card in Standard. 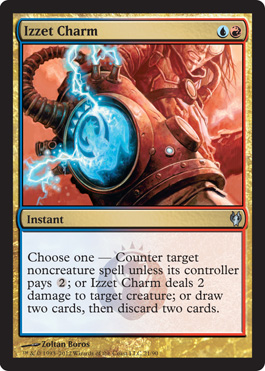 Considering this card is both a counter and burn, it quickly makes the cut in any counter-burn strategy. Faithless looting at 2 mana isn’t exciting, but as an instant it’s much stronger, especially given the flexibility you have when you cast it. I could see this in an aggro-control U/R Delver build, as well as a longer game U/R/x control build. In either case, it provides cheap answers to protect threats or to deal with them after they hit the board. This is all I needed to see to know that [card Snapcaster Mage]Snapcaster[/card] will have a home post rotation and I’m going to rebuy my set. As we looked at a couple weeks ago, some of the Izzet cards I still recommend targeting are Sulfur Falls and Desperate Ravings. Patrick Chapin broke Desperate Ravings early in a Grixis control deck, but control really hasn’t been around since then.

I expect it to come back in an Izzet variety, and this uncommon has already disappeared from view. These can be found well under $1/set and $4-5/set for foils. This is something that could be a big winner, even dumping them to dealers, as I could see this hitting $0.25 buy list pretty easily. It’s a card that has an extremely powerful effect, and flashing it back is some of the most insane value there is (if you’re into that sort of thing). The longer shot part of this call is [card Tibalt the Fiend-blooded]Tibalt[/card]. Tibalt has a very unique set of abilities, that would actually have synergy with a U/R control deck. Given there’s enough redundancy and Flashback in your deck, the random discard on both of these spells is not a big deal. His Stormseeker ability is a absolute beating against control and his ultimate is so scary against aggro they’ll be trying to kill your Tibalt instead of your life. He’s cheap enough now (<$3) that I don’t expect him to drop any further and find him to be a minimal risk even if it is a long shot to succeed. Golgari has also shown us a spicy new 3/3 haste for 3 mana. This guy is aggressively costed and is enough reason to start thinking about G/B aggro, or some variety there of like Jund or Junk. Not to mention he’s got the new Scavenge ability which lets him pump your other dudes from your graveyard. I’m not totally sold on this mechanic or guild yet, but my eyes are fixed, and I’m still looking to pick up Woodland Cemetary whenever the price is right.

In other news, Omniscience is tearing up Legacy and everyone’s hot spec target is Academy Rector. Talk to your EDH friends, find out who’s got them for trade and get ‘em. They’re already sold out everywhere. My Legacy insiders all are ranting about going deep on it, and I can’t disagree with their rationale. A card that’s already an EDH favorite that might suddenly become a 4x in the most popular combo deck in Legacy? Get them if you can. I do recommend a swift sale on any profit you’re comfortable with, as this is something that the metagame will correct if it truly becomes a big deck. If you have any sitting in an EDH deck somewhere, I’d ship them out via EBay and replace them at a later date.

Lastly, I wanted to give everyone a reminder to check misspellings on EBay. I’ve written about this a couple times, but sometimes a refresher is in need. Last week I posted one I found on twitter for two “Duel” lands, and one of my followers bid, and had no competition. Ask @punk43rckr about it if you don’t believe me. Since then, I’ve discovered a site that specifically will check for commonly misspelled listings on EBay. So if it was too hard for you to come up with your own misspellings, try this site! www.typobay.com Pretty easy to use, and will be a serious time saver if you check on these misspellings (and you should!).

This week I’ve got 3 things on my agenda. Pick up Tibalt, Desperate Ravings and ask around for Academy Rectors from EDH folk. I’m continuing to hunt for Innistrad Duels that match the upcoming Ravnica Guilds, and scouring EBay for deals (misspelled or not). Happy hunting this week!