I would like to begin this article with a personal reflection of my experience at GP Boston.

This past Saturday I spent twelve hours on site at GP Boston. After the first five rounds of Limited play I found myself at 5-0 (no byes), at table six out of 636, and seated across Magic World Cup Austria team member Thomas Holzinger. 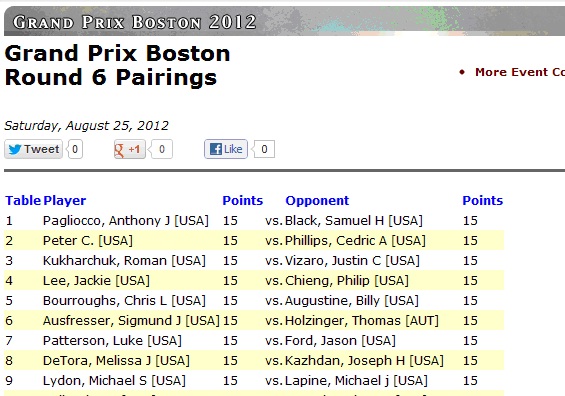 Boy was I out of my league.

After two consecutive, demoralizing match losses I realized something. My passions and my strengths with regards to the game of Magic are clearly not tournament play. Exhausted and entering round eight I found myself wishing I could be writing this article and sharing my financial stories from GP Boston rather than playing to survive in this major event.

To make a long story short, I won round eight but I had already decided beforehand that I needed to go home. I decided my chances of making day two (let alone cashing out in the tournament) were slim enough that I should drop and return to normalcy at home.

I learned three valuable lessons yesterday – first, that I do have solid skill in the game of Magic and I can be competitive. Second, I treasure my connections with the MTG Finance community far more than I treasure competitive play. And finally, unless I am practically guaranteed a prize I much prefer being with my family than trying to win at a tournament.

After a quiet month, I feel like there is finally some financial buzz in Standard. This is likely to ramp up even more once Return to Ravnica spoiler season is underway. When Return to Ravnica is released, there will be a prime opportunity to pick up some Innistrad block cards at optimal prices.

This seems to be a common trend. When a new block is finally introduced, card pools for decks are at their smallest. Therefore, demand ultimately goes up on the previous block’s cards. But this only happens after a short term dip caused by a flooded market and hype the newest set release. Of course, this is right around when the departing block’s cards are cheapest and so it is the optimal time to acquire any Eternal staples you may need from this block.

There are a handful of cards to consider acquiring soon from Scars block. The first cards that come to mind are the swords. Each of them are near their all time lows, but their playability in EDH and Legacy make them viable pick-ups in the near future (chart from blacklotusproject.com). 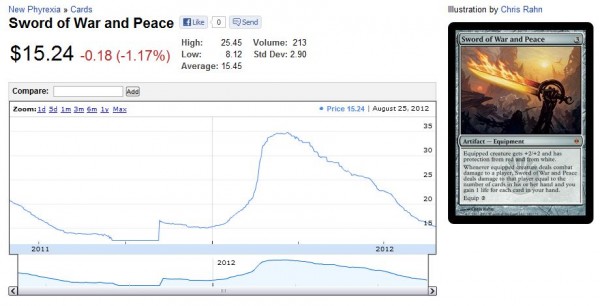 Two other interesting cards I may look to acquire soon are Karn Liberated and Mox Opal. But while Mox Opal is also near its all time low price, Karn has actually rebounded recently. This is likely due to his recent appearances in Modern. It is impressive how robust Karn’s price has proven to be, but I still believe if you need these for play that the time to acquire them is near.

Finally, there are a few smaller cards worth considering for long term acquisitions. The one I want to highlight here is Green Sun's Zenith – a powerful card maintaining a consistent price tag despite appearing in an Event Deck (chart from blacklotusproject.com). It probably won’t be too difficult to trade fresh Return to Ravnica cards for these Zeniths at around $6, which is nearly equivalent to converting your overpriced RtR cards for cash. 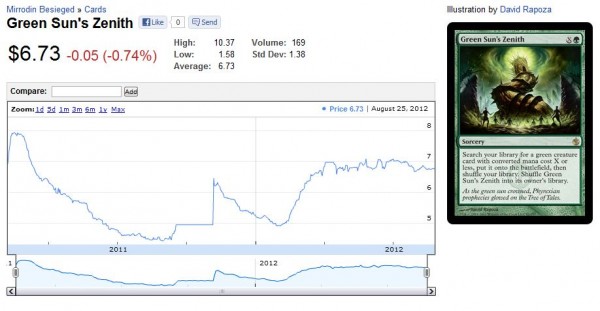 This is where things get interesting. This block has some very powerful cards that should prove useful even in the new Standard. While I could spend countless articles highlighting all of them, I’ll choose to focus on the few cards I’m currently eyeing.

First and foremost, and for the millionth time, I am bullish on Innistrad Dual Lands. Everyone knows why. But everyone may not know that as of Saturday, Star City Games only had six SP Clifftop Retreats in stock at $6.49 and zero NM copies at $6.99. They also only have nine NM copies of Hinterland Harbor in stock selling at $6.99. While dealers are still only offering $3 each to buy these cards, I feel their stocks will dry up soon and these will be on the rise.

I have also been recently touting the miracles of Avacyn Restored. While everyone knows Bonfire of the Damned is on the rise, cards like Terminus and Temporal Mastery may deserve a second look (chart from blacklotusproject.com). 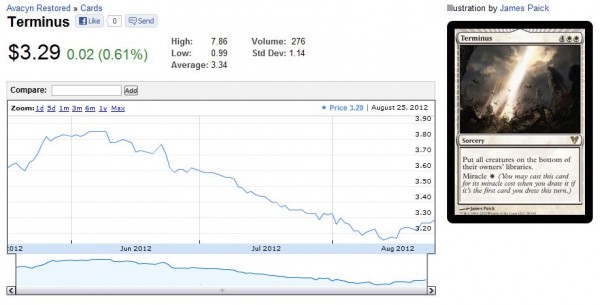 Terminus hasn’t moved much in price since its release, but the trend this month has been slightly positive. With Day of Judgment rotating and no other board sweeper spoiled yet, this card may see increased play. Its utility in Legacy has also increased my interest in this card.

Temporal Mastery is also near it’s all time low price (chart from blacklotusproject.com). 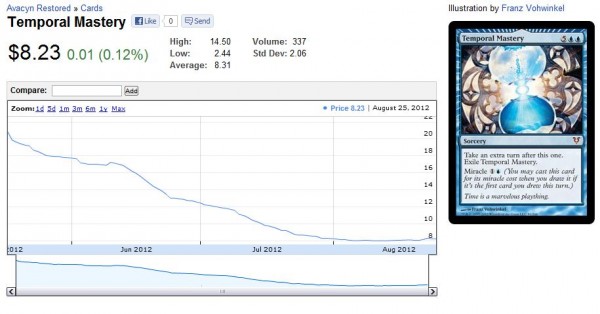 Like Terminus, Temporal Mastery is just starting to see more play in constructed formats. Time will tell on this one, but if you need a set or are interested in speculating on these, the time to acquire them is near.

As for the some of the current Standard staples such as Geist of Saint Traft and Snapcaster Mage, I am still on the fence. These may be powerhouses now, but their utility will have to be proven again come rotation. Now, of course both are seeing solid Modern play and Snapcaster Mage sees Legacy play as well. So their prices do have a floor. But even if these cards do remain strong, they likely hold limited upside (especially Snappy, which is already a $20 rare in Standard).

One last recommendation I can make here requires a slightly larger investment, but with almost no downside – Avacyn Restored booster boxes. These are averaging in the $95 dollar range on eBay and I don’t expect their prices to drop. In fact, the only other stand-alone third set released by Wizards recently, Rise of the Eldrazi, currently averages $150 on eBay for English booster boxes. This represents a potential 50% return.

Given that Avacyn Restored is filled with both casual favorites (Angels galore) and powerful spells (Bonfire of the Damned, Terminus), acquiring a booster box or two of this set seems like a no-lose scenario. And while I can’t guarantee my other recommendations will increase in value, I am 99% sure Avacyn Restored booster boxes will not lose you money if you hold onto them for a couple years. It all depends on your goals and strategies for profiting.

I picked up a few interesting facts this past weekend when talking with buyers at the dealer booths. None of them are aggressively buying Restoration Angel or Snapcaster Mage. The best offers I got on these were $6 and $12 respectively. When I challenged these offers, I was simply told that they already had many in stock.

Another card that didn’t move well was Overmaster, but I think this card’s time is near. Innistrad Duals only fetched $3 from the dealers, but I did notice many of the dealers lacked stock on at least one of the five. I feel these buy prices are due for a hike in the near future, perhaps a few weeks after Return to Ravnica’s release.

Not surprisingly, there was not much I actually was happy to sell to the dealers this time around. With everyone in a holding pattern in anticipation of Return to Ravnica, dealers are not willing to over commit to some cards. That being said, I still managed to move a few things here and there for solid prices and I am pleased with the outcome.

But the most important learning for me this past weekend was about my own priorities. My passion is still for MTG finance, and while having my one round amongst the pros was an exciting moment for my Magic playing career, I still prefer the convenience and rewards of Magic finance. Speculating on cards requires less time away from my family and is much less tiring. For these reasons, I plan on sticking with MTG finance for years to come.