Looking over historical price trends, one notices that the price bottom for the cards from Mirrodin Besieged (MBS), as represented in the MTGGoldfish chart of the MBS index, is the end of July 2011. New Phyrexia (NPH) has a similar chart. That last week of July coincided with M12 release events, a time when prizes for sealed events are quite generous.

The attractive payout structure pushes the demand for tix higher as they are the only means to play in sealed deck release events. Ordinarily, limited events accept a combination of boosters and tix as entry, but not in this case. The attitude of most MTGO players is such that they are enamored with the idea of ‘going infinite’, ie, not having to pay to play.

Combined, these effects broadly depress prices for singles, as the quickest way for players to gather some tix is to sell singles into the market, typically to bots. This, along with the shift towards M12 as a draft format, gives a reasonable explanation for why these indices hit a low during core set release events. 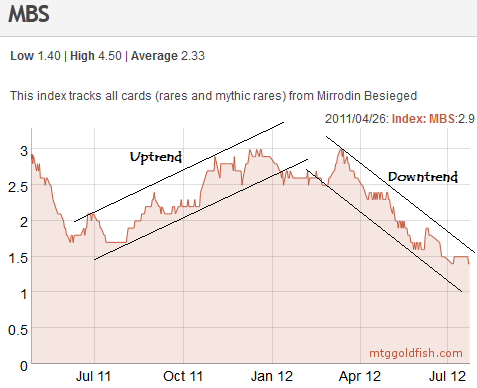 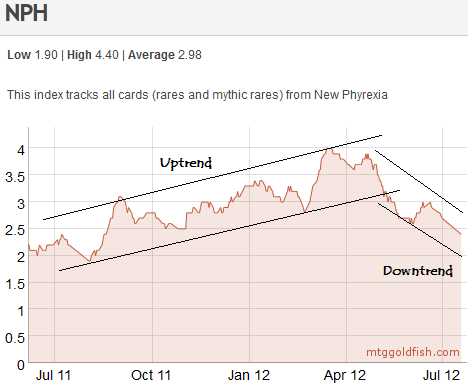 Further examination of the chart shows that after the observed low at the end of July, an uptrend begins, which is defined as a series of higher highs and higher lows. For MBS, the trend is intact until January 2012. And for NPH, the trend lasts until May of 2012.

After the upward trend is broken, both MBS and NPH begin a downtrend where a series of lower highs and lower lows are reached. This downtrend is ongoing at the moment, as players eye the Fall rotation. It will continue until approximately October, when Scars block and M12 rotate out of Standard.

This observed pricing trend is useful to speculators. As a general rule, when considering the timing of taking positions in the latest sets, the core set release event period is the best window of opportunity.

As M13 release events begin firing, any of the best speculative targets from Dark Ascension (DKA) and Avacyn Restored (AVR) should be purchased. Each of the following proposed targets carries two ratings, one for risk and one for return. Here ‘Risk’ is the chance of suffering a loss on a medium time horizon (3-6 months) if purchased at the suggested prices while ‘Return’ measures the potential gain if things work out as predicted. When considering taking a position, it’s prudent to always consider risk first.

This Planeswalker sees sporadic play in Standard at the moment and has found a price floor of 14-15 tix. As players try to crack the metagame of Fall Standard by trying out strategies both new and old, expect a resurgent interest in this card. Both Elspeth Tirel and Garruk, Primal Hunter saw huge spikes in price during October of last year as the metagame sought to establish itself. Expect Sorin to see similar price action as players test out W/B tokens in the new format.

Usually a key predictor of the Fall Standard metagame will be the decks from Block Constructed. However, this year Lingering Souls and Intangible Virtue were banned in Block so the successful Block decks we have seen online are not entirely representative of what we can expect in the Fall. The true power of token decks is probably quite high an,d for this reason, Sorin, Lord of Innistrad is under priced relative to other Block staples such as Bonfire of the Damned and Huntmaster of the Fells.

As a strategy, Tokens might take people by surprise in Fall Standard. As a good speculator, don't be surprised. 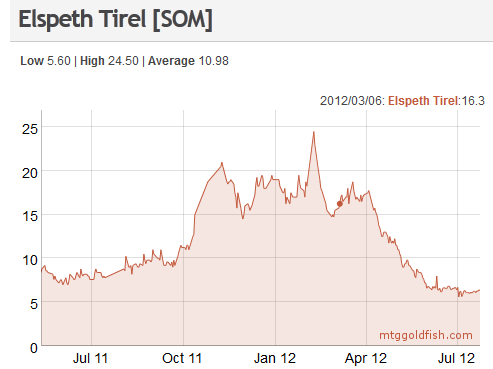 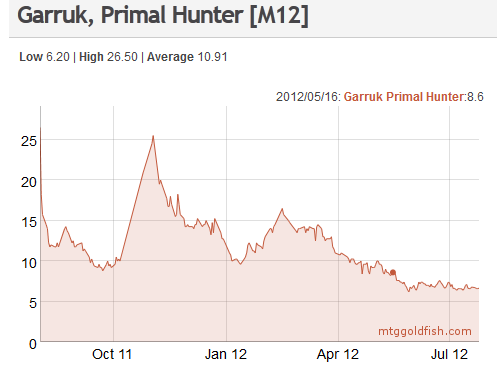 Downside protection on buying Sorin, Lord of Innistrad is offered in the run up to the release of Gatecrash in early 2013. That set will have the Orzhov guild returning, so any powerful W/B cards will have extra interest at this time as deck builders anticipate using the new cards in Gatecrash. Acquire this card for 14-15 tix during M13 release events.

This card has powered up Delver variants in Standard as well as Birthing Pod decks in Modern. This card is a staple for both formats.  The price has settled into a range of between 6 and 8 tix lately, but we can expect a small dip in price during M13 release events. The start of the Modern PTQ season in January 2013 offers downside protection on this position -- if the price remains stable or falls once rotation hits, then higher demand during the PTQ season should provide the best opportunity to exit this trade.

Acquire this card for for 5-6 tix during M13 release events, either through posting to the classifieds and picking up copies that players are dumping or through the bots. This price range is a high level to stake out a position in a rare, but recent examples of rares hitting 10+ tix include Stoneforge Mystic, Kalastria Highborn, and Birthing Pod.

Both of these rare zombies have seen their prices hover between 3 and 5 tix since the start of June. Typically they have moved together, with Gravecrawler holding a slight premium. They form the backbone of any aggro zombie strategy in Standard, and the current builds will be largely intact come rotation of Scars block and M12.

There might be a good opportunity to sell these before rotation, so keep your eye open and don't just file these away for October. Holding for rotation will not be a mistake, though, as the early stages of a new Standard format are often filled with aggressive strategies, so expect to see Zombies taking it's place in the metagame right off the bat.

If possible, pick these up for around 3 tix, though as of Aug 8th they are both above 5 tix, which brings an unacceptable level of risk.

This card has been in a steady down trend since AVR was released. With a restrictive casting cost and few practical applications at the moment, this card has fallen to an all time low for a single printing in-print Planeswalker.

When you start to talk about the cheapest mythic Planeswalker ever, it's time to pay attention.

With the price so low, it will quite literally have difficulty going lower. Buying this card might never yield any profit, but at worst it will result in a small loss. On the upside, if it finds a home, it could rise to 6-8 tix. Buy this card as a low risk gamble for between 2.5 and 3 tix.

Unfortunately, the recent spike in the price of Bonfire of the Damned and Temporal Mastery has dragged upwards the price of all AVR mythics. As of Aug 8th, Tibalt is hovering closer to 4 tix.

In comparison to Tibalt, this rare is at a critical juncture of price and playability. It is good but is it good enough?

Wolfir Silverheart has been sitting in the 1.5 to 2 tix range and copies of it are all over the top decks of ISD Block Constructed. If things break right, it could see a price of between 3 to 4 tix. However, as a rare (as opposed to a mythic) it could just as easily settle into a range of 0.5 to 1.5 tix.

And with Jund decks being over represented in ISD Block Constructed, this card has little going for it at the moment.

For much the same reason that Wolfir Silverheart is priced too high, this card is priced too low. Tokens being nerfed in Block means that this enabler isn't in high demand at the moment on MTGO. Stick a few of these under the mattress for Fall Standard.

Pick them up for 2 tix or less and on the upside they could hit 5+ tix. Expect Tokens to be a part of the metagame in the Fall. This guy will be in the thick of things as another pseudo anthem effect.

The case has been made here for a few cards with varying potential.

Sorin, Lord of Innistrad carries the best risk/return ratio of the cards considered here. After Pre-Release weekend for M13, prices softened on many cards but there are a few in demand cards for Standard that have hit new highs, such as Restoration Angel and the DKA zombies.

Keep your eyes open for prices to slide over the first weekend of Release events and get your tix ready to snap up any opportunities. Remember, don't over pay for these cards as a higher price increases risk and reduces potential return.

16 thoughts on “Insider: M13 Release Impacts on the MTGO Market”