I am writing this article in the middle of the RtR Spoiling season when people get excited, cards get overhyped or frowned upon, brewers start their testing sessions eager to make an impact, and we speculators come back from holidays ready for financial opportunities.

In this article I want to address a mix of different topics I have been thinking of, discussing and doing recently.

First things first I am still going deep on Overmaster as the webshops in Europe are starting to up their prices if they have any in stock. 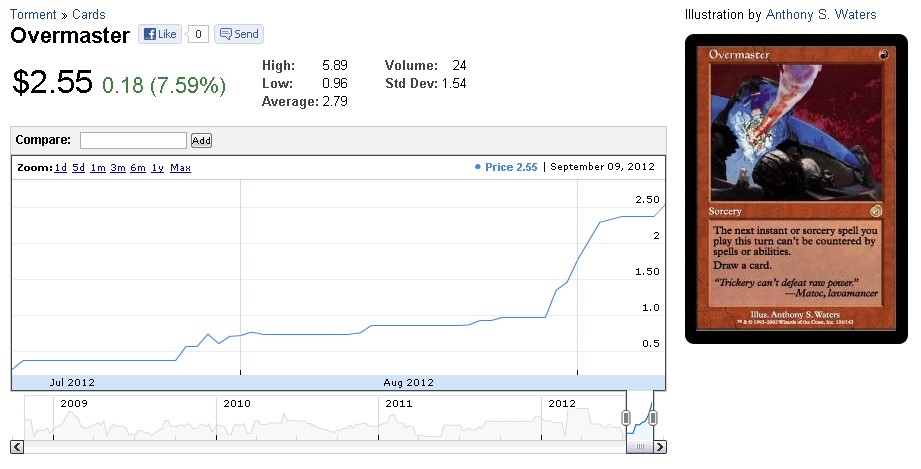 I think $2.55 is far from the real eBay price. MagicTraders has it at $3.88 currently and looking through eBay.com itself I see three auctions at $15 in played condition (80%) and two other playsets at $19. If you've been following the Overmaster thread in the forums, you know some posters are confident they can still sell them for $5 a piece. I have some Overmasters incoming from vendors and plan to put this to the test.

I am the only non-US seller selling it as a single card instead of a playset, and I feel this puts me at an advantage because in the past people have bought 2 or 3 copies each from me. My buyers are mostly residing in European countries in which I have no competition other than a lone Spaniard selling Spanish-language copies.

I bought 35 copies at €0.50 ($0.65) each and sold them for $4.5 each within a week. I still find some shops with these cards at bulk price so I think I will order some more and keep a playset just in case prices rise even more. If you can find any under $1.50, I would recommend buying them. If you can find any in trade binders or bulk bins, by all means ask them to add one or two as a deal closer.

Thoughts about Return to Ravnica Spoilers

Presale has started in Europe. Keep in mind that StarCityGames is among the quickest companies to offer the new product, a "luxury" we don't enjoy in Europe. When I'm looking for presale cards, I mostly look at MagicCardMarket.eu. Several sellers from different countries offer presales and they are fiercely competitive which makes cards either extremely cheap or overpriced.

A prime example is Abrupt Decay:

It is currently in the top weekly selling cards on MagicCardMarket among other RtR cards like Supreme Verdict (€3.70 low), Lotleth Troll (€7.25 low) and Dreadbore (€5.87 low).

But Abrupt Decay is particularly interesting because StarCityGames has it priced at only $15 USD.

Since I feel this set is following the same spoiling pattern as Avacyn Restored (I will write in more detail about this when I have done my analysis), I will not be purchasing any of these cards as speculation targets.

Avacyn Restored spoiler season began with Avacyn, Angel of Hope, Griselbrand and Temporal Mastery. It continued with hyped cards like Vexing Devil, [card Tamiyo, the Moon Sage]Tamiyo[/card], Desolate Lighthouse and [card Tibalt, the Fiend-Blooded]Tibalt[/card]. Bonfire of the Damned was spoiled at the same time as Tibalt and Tamiyo so it sneaked under almost everyone's radar, especially when 48 hours later Entreat the Angels was miraculously spoiled.

I will be looking closely every day. I also have the luxury of being a member of the Irish/United Kingdom Magic page in which people post new cards and go nuts with comments. This way I get a good grasp of how people are thinking about a card, and can decide whether to speculate on it or trade it away during the prerelease.

A thought about sealed booster boxes. It is common for online shops to sell them for 85€ - 87.50 ($108 - 111). Some weeks ago the exchange rate was 1.22:1 so it would have been $104. I know more or less how much it cost for retail shops to buy these boxes from their wholesale distributor. My conclusion is that booster box prices won't rise that much here in Europe compared to USA.

Magic Celebration was honestly fun. A lot of players showed up (free boosters, I'll take it!) and some even brought trading binders with them. I cracked my first pack to find a Thundermaw Hellkite. I actually put effort in making the first page of my binder as attractive as possible for these casual players.

So since I have a 3x3 UltraPro binder these were the nine cards I put in front: Serra Avenger, Bruna, Light of Alabaster, Avacyn, Angel of Hope, Angel of Jubilation, Akroma's Memorial, Foil Battle of Wits, Elvish Piper, Gideon Jura, Thundermaw Hellkite.

Now one has to realize that I have two binders, one more exclusive with cards like Vendilion Clique, Innistrad duals et.al., which I do not show as easily as the first binder. The binder I show first contains cards that appeal to Standard, EDH and casual players.

The goal for each card in the front of the binder is to create instant excitement and a "must have card" urge for whatever reason. A first impression is something I am testing out in my community, as I do not like asking, "Do you have any trades?" I much prefer starting a conversation with a player who is already looking at my Avacyn with interest. Then I can transition into trading.

If a person gets instantly excited about certain cards, they will trade easier with you, especially if you small talk during the trade. I dislike quoting of prices and I won't even start talking about ratings as it costs me time and energy and I want to keep it simple for these players.

In the end I made a few trades, but in one a guy who pretends he is a good guy saving novices from getting ripped off was interfering by saying he could pull out half of my cards. This is annoying and creates tension among the trading table. I told him to not interfere as I was not interfering with his trades. I should have thanked him for helping people out and then seize momentum by just adding a few rares in the trade that make my trading partner even happier.

I want to end this section discussing a moderate-size trade I made for some eternal cards. Inspired by my playtest group who plays a cube weekly, my trading partner wanted to create a cube himself. Since cube owners tend to change their cube constantly, you can be there to offer advice on what cards to include, and trade or sell them what they need.

I made the following trade using the average price on Magic.TCGPlayer.com (It made the trade easier and I had no intention of taking advantage of him):

I helped out his cube and I got the cards I was looking for for my EDH deck. The Noble Hierarch is basically in there because he did not want to trade his Bribery, which was of course unfortunate but I can't complain.
I like this trade because I traded away Standard cards for eternal cards that are hard for me to get in general because of what I possess.

Lastly, I was talking with fellow QS author Sigmund Ausfresser about starting up a MODO portfolio. So far I have only focused on paper Magic, but lately I've been thinking about writing an article cataloging the development of an online portfolio, and I want to see what my readers think.

Basically the article would be a sort of diary of progressing from a starting point of, let's say, 100 tickets to 1000 tickets. I would describe what I invest my tickets in and the various permutations of the portfolio as it develops. Let me know what you think about this idea. I look forward to reading your comments!

P.S. I changed my Twitter nickname to twitter.com/gerv055. Generally I tweet with other speculators about certain cards but from time to time I'm also looking to buy some MTGO tix!

19 thoughts on “Insider: Across the Atlantic – Trades, Thoughts & Speculation”