Many finance articles focus heavily on the supply and demand portion. I reference this portion of the pastime frequently as well. For example, my lack of desire to pre-order Return to Ravnica cards because of price inflation due to hype and perceived short supply is a fundamental economics concept that is easy to understand. 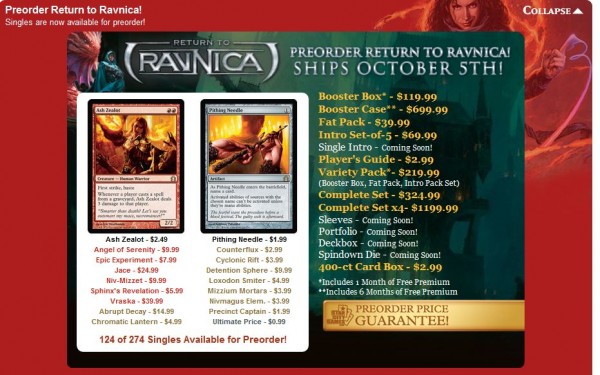 But basic economic theory isn’t sufficient to explain all players’ behaviors, and this is due to other factors involved in the hobby. The historical data is blaring – presale prices nearly always drop upon a set’s release. Yet emotions run wild and players want to brew up the next competitive deck right away so they throw rational economic sense out the window and make their purchases.

This week I want to return to the behaviors of Magic players that are driven not by economic gain, but by emotional and psychological factors. And while not directly applicable to speculating on cards, perhaps it will open the window a bit further into what causes us to do the irrational from time to time.

The first concept I want to introduce perhaps explains why people preorder cards at ridiculous prices. We are all convinced that there will be a card or two in Return to Ravnica that will shoot up in price post release. And we all hope we will be capable of identifying said treasure.

But the reality is in order to be successful in this endeavor, emotions and past associations need to be kept in check. It is easy into fall into the trap of saying a card like Abrupt Decay is destined for greatness because it’s bigger brothers Maelstrom Pulse and Vindicate are valuable removal spells in Eternal formats.

Because of selective memory, these examples are causing an inflated preorder price on Abrupt Decay.

Here’s my take: people compare Abrupt Decay to Maelstrom Pulse and they identify how Pulse was a $20 card in Standard despite not being Mythic. What they neglect to remember is that Jund had completely warped the Standard format, and so the removal spell was in especially high demand. But the format distortion was not caused by Maelstrom Pulse, but by a partner in crime… Bloodbraid Elf.

Next, people will compare the card to Vindicate, identifying how that card is now worth over $20 thanks to Legacy. What they neglect to notice, however, is that the card was worth half that for years (chart from blacklotusproject.com), not to mention the fact that Apocalypse didn’t sell on the same order of magnitude as Return to Ravnica will. Additionally, Abrupt Decay is a Rare in the Mythic Rare era. 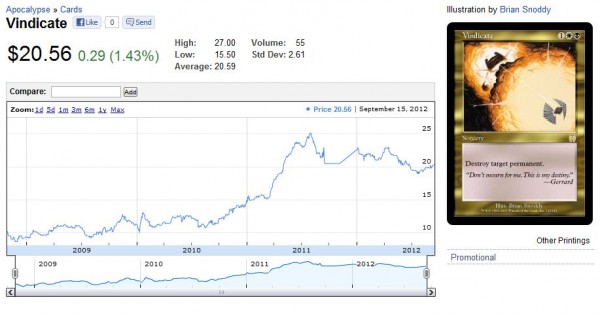 Players like to preorder cards they can associate with other cards because it makes them feel capable of predicting future prices based on these comparisons. But often times people are led astray because of these comparisons.

Another example is with Time Reversal, which sold for $29.99 upon initial spoiling simply due to the association with [card Timetwister]Power 9[/card]. It’s the same reason nearly every new Planeswalker is way overpriced during preorder season – emotional responses of buyers due to a potential subconscious association with Jace, the Mind Sculptor. 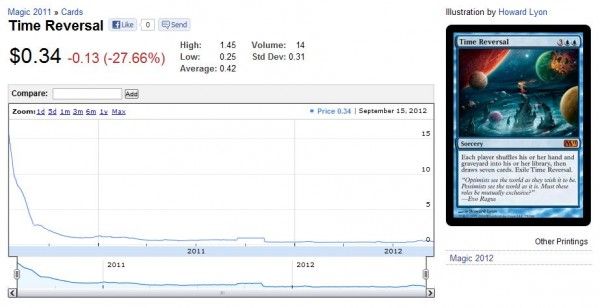 But the fact that we are capable of making this association hinders us more than it helps us. It gives us a false feeling that we can predict what’s next, when in reality there are a plethora of other factors involved with price predictions. It is very easy to fall into the trap of making a prediction based on selective memory.

The best way to avoid this pitfall: don’t preorder cards.

(Disclaimer: the only card I’ve preordered from Return to Ravnica is a set of Angel of Serenity. I collect angels and since the card is a Mythic Rare, I don’t anticipate I’ll be opening one in draft any time soon.)

The Cost of Ownership

The other concept I want to mention comes from Behavioral Economics again, and I picked this idea up from Dan Ariely’s Predictably Irrational: The cost of ownership.

I’ll begin with an example – have you ever attempted to trade with someone only to find they were valuing their Snapcaster Mage at retail? They proceed to explain how it’s always in high demand and easy to move, and therefore they deserve a premium on the card.

In reality, the card is readily available on MOTL for $18-$20 despite retailing for $24.99. You know this, and you also know that many players trade the card at $20 since everyone knows a twenty dollar bill will immediately get you a dozen sellers on MOTL willing to sell you their copy (chart from blacklotusproject.com). 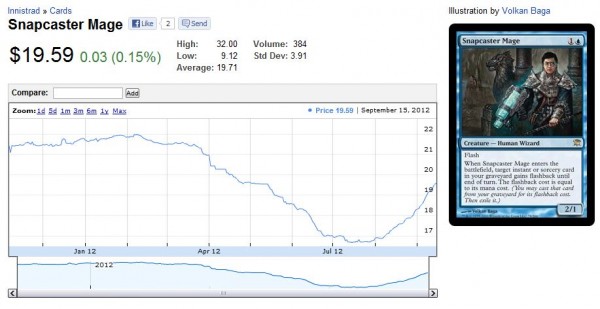 Why does this discrepancy exist? Often times, the owner of a card or other item will value it higher than the party interested in acquiring the same item. The owner subconsciously will factor in many additional pieces of data that you aren’t privy to. The owner may consider what they gave up for the Snapcaster Mage, the fact that the Snapcaster Mage is part of a playset, or that the card recently won them a tournament. Whatever the influential factors are, they aren’t economics-driven and they often aren’t rational.

A Snapcaster Mage is a Snapcaster Mage, and almost everyone knows what they are worth. The information is public and widespread due to the popularity of the card, yet sometimes we fall short of an agreement on the card’s value. This concept can apply to many situations involving any card, really.

How can we beat this shortcoming everyone possesses, including ourselves, if we’re not consciously doing it?

My advice is that you try to position a trade with someone in a way that makes your trade partner feel like they already own your cards before the trade is complete. The best way I’ve come up with to do this is by encouraging your trade partner to pull the cards they want out of your binder and place them aside during a trade. By doing this, they already subconsciously feel like they “own” the cards and that the trade is going to be more likely. Because of the perceived ownership, they just may be willing to value your cards a tiny bit higher.

There’s even ample data to support this concept all over eBay. Many times I’ve acquired a card at a discount because the starting bid was placed just below average completed auction prices. People see the higher starting bid and although it may be slightly below average ended auctions, they compare the price with auctions for the same card starting at $0.99 and they bid on those instead.

Once they bid, they subconsciously (or even consciously) begin to feel like they already own the cards. They anticipate winning the auction, and winning is a great feeling in and of itself. Then when they are suddenly outbid they are willing to pay more for the cards because they feel like they lost something they already possessed. And that feeling of loss is quite powerful. The end result – the buyer ends up with an economically suboptimal outcome due to irrational emotions.

Examples are endless on eBay, but I’ll use two recent Snapcaster Mage auctions to illustrate my point. 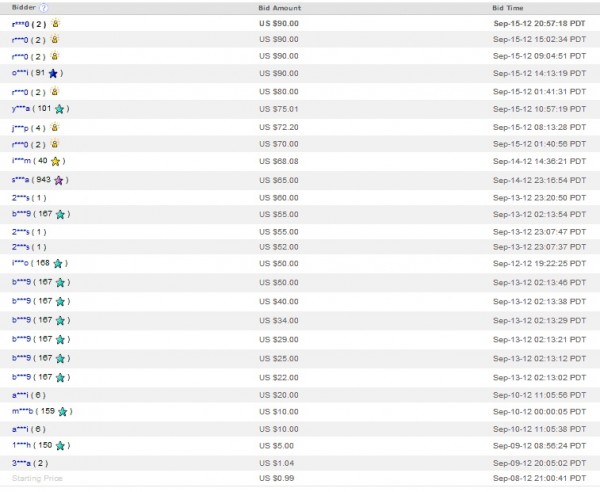 This auction started at $70.00 and ended up selling with one bid:

Granted there are other factors involved when predicting ended auction prices on eBay – a seller’s feedback rating, card conditions, auction ending time, etc. But I’ve found that auctions for popular cards that start right below average completed auction values sell for less than auctions starting at $0.99. I am a believer that this is due to the emotional “cost of ownership”

Nobel Prizes have been won for some of the economic concepts we learn in high school and college, but it’s interesting how experts in the field of psychology and behavioral sciences are recently finding shortcomings in some of these basic economic concepts. Supply and Demand and the Invisible Hand are not the only factors dictating price because human beings are occasionally emotional, irrational creatures.

Now I want to try something a little different. I’m always observing price trends on cards I’m interested in buying/selling. I want to try closing my article with three recent observations, which I find noteworthy. While unrelated to the article’s content, such tidbits of information may be both interesting and useful to you in your trading.

Let me know if you like this feature and I’ll continue to close out my articles with more of such observations on a weekly basis.