Week after week Wizards has blown me away with how awesome Return to Ravnica will be. I’m excited to see what will happen to Standard (and even Modern or Legacy). I am also anxious to start drafting this set. Since last week we’ve gotten a lot of new cards that are certainly going to shake up Constructed come release day. 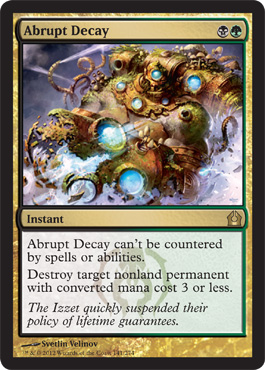 Abrupt Decay is a card that is getting a lot of attention, and deservedly so. Unfortunately, it’s pre-order price of $15 is a bit prohibitive to make a move. This price is pretty spot on, in my opinion. It’s such a cheap spell with a powerful, uncounterable effect. It will see play in older formats as well. Maelstrom Pulse, the closest thing we’ve seen to this card in Standard for quite some time hit as high as $17 during its Standard tenure, and I expect we’re looking at something quite similar, despite the additional demand from older formats. When this card was pre-ordering around $10 I liked it, but at $15 there’s too much risk with far too little reward.

In the same “uncounterable” cycle, we have Loxodon Smiter. This guy is pretty interesting. He’s a 3-mana 4/4, which on it’s own is aggressively costed. Additionally, he gets put into play for free if your opponent forces you to discard him. While Standard hasn’t been plagued by much discard lately, it is an interesting clause, perhaps even a foreshadowing of things to come. His $5 price tag is curious, because either he’ll be a great sideboard card if discard reappears in Standard, or he’ll simply be the right call for the curve in a G/W aggro deck, but in either case, it’s way too early to know what the format will look like around him, and he’s not powerful enough on his own to create an archetype. 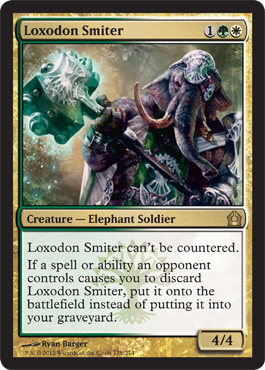 Jarad’s Orders is a card I’m personally pretty excited about. Combining Eladmri's Call and Entomb onto one card is certainly a powerful effect, yet it’s costed high enough (4-mana) that it will not likely see much play in Modern or Legacy. In Commander, however, this card is insane. I’d imagine most G/B/x decks in Commander can make good use of both parts of this spell and will include this in their 99 almost immediately. $1.50 is a bit low for a preorder on this one, in my opinion. This will be at least $2-3 in the short term, and possibly higher if a Standard deck can play it. Golgari hasn’t really shown me enough synergy with this card to warrant running it but there’s still over 100 cards to spoil. I’m not exactly chomping at the bit to pre-order this card, but I do think it has room to grow, and if we see any reanimation spells (entomb my Griselbrand, maybe?) then this card can shoot up a bunch. I’ve got it bookmarked if such a card pops up.

Speaking of cards that I’m personally excited about, Cyclonic Rift. This card is my kind of card. It’s clearly meant for the control player, and has unrestrictive color requirements. We could slot this into a 4-5 color control deck as a haymaker. While it’s preorder price of $4 is likely too high, it’s a card that will be on my radar in trades as prices start stabilizing. Most control decks wont play more than one or two of this card, and it’s unlikely to see play in older formats with the exception of Commander, where it will be amazing. Overload is a great mechanic for multiplayer as it scales well for large games without an additional cost. 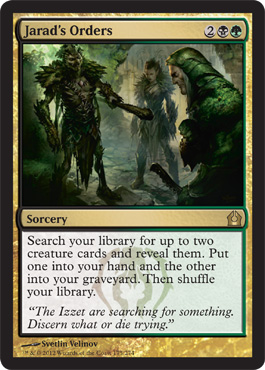 Shocklands have shot up in pre-order pricing, initially sitting at $10, some have risen to $15. This is insanity in my opinion. $10 should be the ceiling for these on a whole, while there may be one particular shockland that sits just above once we know what the format looks like. Being a second printing, there are a ton of these around. They also aren’t hidden in boxes, they are out and around in trade binders and fairly easy to find.

I’ve been hearing lots of talk about Return to Ravnica being one of the best sets to open since Future Sight. While that may be true, I want to reiterate a point I’ve made here before. Distributors pay a fixed rate for product. They sell to stores/dealers at a (mostly) fixed rate. These are businesses, and their goal is to profit.

Now that we’ve established some facts, let’s talk about the theory here. It’s easy to say, “this card is $X, that card is $Y” but keep in mind that this is all within the context of where it came from. When we start slapping preorder prices on cards this early in speculation, we’re not leaving too much room for value in the remaining cards that get spoiled. The sum value of a set of Magic in the modern era is fairly consistent, and this is because the price of a box/case is fairly consistent. We saw Jace hit heights of $100 because the rest of the set was essentially worthless, and in order to find him, you had to open a lot of packs (see: Spend a lot of money). What you could think of, is how many packs out of each case would the dealer need to open to make his money back in singles, compared to his cost of a case. 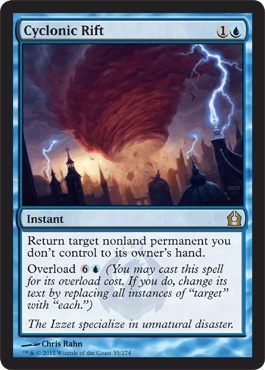 As more and more cards are spoiled and slapped with high price tags, that number of packs the dealer needs to open starts to fall. At a certain point, and this is just economic theory talking here, more dealers would enter the market to get at this free money. Well in order to compete with each other they’d have to lower their singles prices cutting their profits back down a bit. This is where the timeline of Spoiler season hurts the consumer who wants to pre-order. Spending top dollar on the new G/B planeswalker for example, is a huge mistake. We still have lots of cards left to see, and if those cards are exciting, it will actually decrease the value of the planeswalker in the long run.

Remember, the overall value of the set is relatively fixed, so if other cards in the set are increasing (from unknown spoilers to known cards that have pre-order value) than the existing high dollar cards would have to decrease to offset that change. No matter how amazing this set appears, buying product and cracking it for profit is not as easy as it sounds, and is not something I would recommend doing without an excellent system in place to start moving the singles immediately. Also keep in mind, this will be available for set redemption on MTGO, and if prices stay as high as they are now, you could simply build sets on MTGO, redeem them, and sell them at a profit. So, if you doubt the theory behind this, just wait for MTGO to abuse it, where the speed at which you can buy and sell is much lower, and boosters cost a flat rate and are essentially never stocked out.

2 thoughts on “Insider: Pick a Pack of Ravnica Spoils”