Finance writers, myself included, are always discussing cards they are buying and selling. We are quick to identify cards that are possibly due for a price increase and we are sometimes able to point out when a card has hit its peak.

All these articles make it seem like finance writers are the cowboys of MTG finance. They take wild risks, they buy hundreds of a card and hope to run up the price. And they are not as accurate as they make themselves to appear. This is not wholly true.

I buy cards with the hope of profiting on them – of that there is no secret. But what some people may overlook is the fact that the majority of my purchases are not solely based on speculation. In fact, being so risk averse, very few of my hard-earned dollars go into pure speculation. Why take such high risks when there are better reasons to buy cards?

Cards don’t increase in price overnight (unless they are unbanned from constructed play). There is often a period of a few days to a week where the card price slowly rises before making what appears to be a significant jump.

The most recent example I can site is Overmaster (chart from blacklotusproject.com): 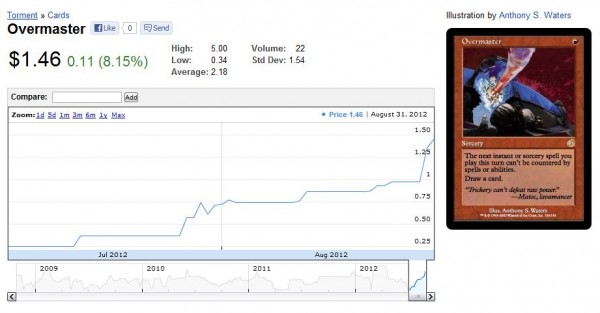 Observe how the card was making a steady rise throughout July and most of August, but recently the card has spiked. It’s almost as if there were a few people truly speculating on this card and when it gained some notice, the masses decided it was worth jumping in.

Of course, much like other cards which go through a brief period of hype, I’m willing to take a guess at how this curve will look in September and October… 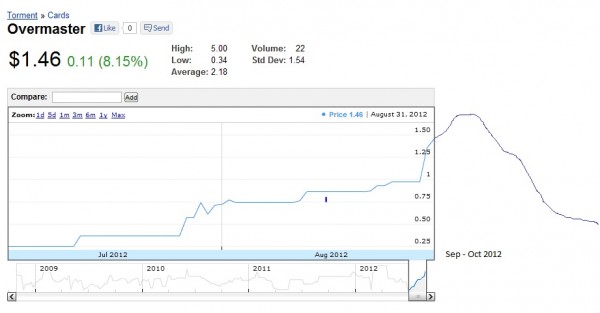 Okay, maybe this is a bit pessimistic. If Overmaster sees fringe Legacy (such as Troy Thompson's Omni-Tell deck from this past weekend) play it could end up in the $2-$3 range, kind of like Trickbind or Angel's Grace. But it will probably hit a peak soon and then pull back.

Let’s dissect this curve a little further. Here, we can try and identify what type of buyers are purchasing a card like Overmaster as it passes through this hype curve. 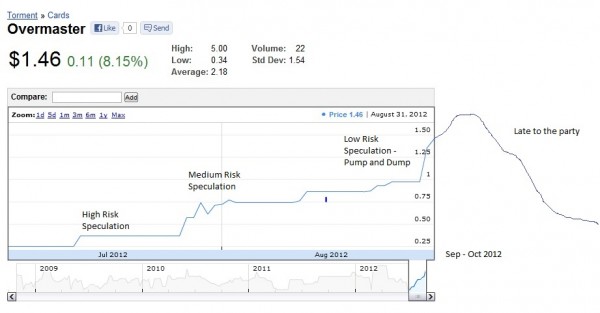 Buying Overmaster in July when it was initially “noticed” would have been very risky. This is where the true speculators play. They identify a card that saw Legacy play for the first time ever in someone’s sideboard and they snap-buy a bunch. I call this area high risk based on the likelihood of return. In a way, the risk isn’t really too high since copies of this card could be had for $0.25 at the time. But the likelihood of profit was still debatable.

In the middle of the chart, the card already gained some traction. Pros may have taken notice to the card, testing it out in MTGO events. This is where the risk level begins to diminish but the potential reward has shrunk, due to the card’s doubling in price.

Finally, right before the huge spike is the pump and dump zone. This is where many speculators buy out eBay and TCG Player, driving the price up to a ridiculous high only to sell them right away. At this stage, finding a copy of Overmaster below $1 was the easiest way to make money since the card was already selling for over $2 on eBay. As long as you are thorough in your search to ensure you are paying less than auction prices, there really is a low degree of risk here.

When I “speculate”, I try to participate in the second half of that curve. I wait for the card to gather some attention and maybe buy a set. Then when I observe that I can sell this set on eBay for profit and we are approaching the price spike, I scour the internet for any underpriced copies of the card (side note – in this case it was Amazon and Card Shark, where I bought 8 copies and 5 copies respectively for under $1 each shipped). I made this purchase only after seeing sets selling on eBay for over $2 each.

A well-known finance writer once sent me a Tweet that appeared condescending at first, but truly was a solid piece of advice in the end. I had been sharing my thoughts on Food Chain being a good speculation target (chart from blacklotusproject.com). 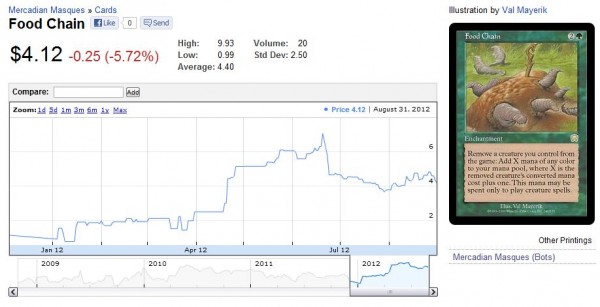 To paraphrase, this well-known writer told me that what I was doing was not true speculation. Rather, I was merely practicing good timing.

While this offended me at first, I later realized he was absolutely right. Food Chain was already noticed as a speculation target and I was merely buying underpriced copies and selling them for profit. This is precisely where I like to play. It keeps risk down and it nets me rapid profit.

I’m not advocating only waiting for these opportunities to buy cards. After all, this would lead to long periods of stagnation when your money could be working for you!

In between the hyped cards, I often try to slowly acquire cards I have high reason to believe will be stable or even increase in value. I’ve already discussed the Innistrad Dual Lands to oblivion, so I won’t waste space here elaborating upon why I felt these were a constant buy in the past couple months.

Real Estate is generally a solid approach to take even beyond Innistrad Duals – especially if the land cards are playable in Eternal formats. Everyone knows about the Zendikar Fetch Lands, and I make it a point to always have an extra dozen or so in my trade binder. When I have the chance to trade them away or sell them for profit, I do so only to restock them again when I find a deal (chart from blacklotusproject.com). 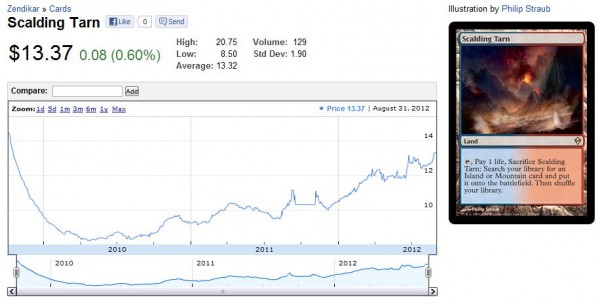 Other Real Estate I’ve got my eyes on now are the Scars of Mirrodin Fast Lands. After spiking to double digits a couple months ago, the blue ones are hitting lows as they approach rotation. But these lands do see some play in Modern and they supplement mana bases of aggressive decks very well.

I just may be looking to pick up my set of 20 Fast Lands in the coming months if I can find a good price. Don’t agree? Just compare the chart of Seachrome Coast with the charts of the Filter Lands, which also see some Modern play (charts from blacklotusproject.com). 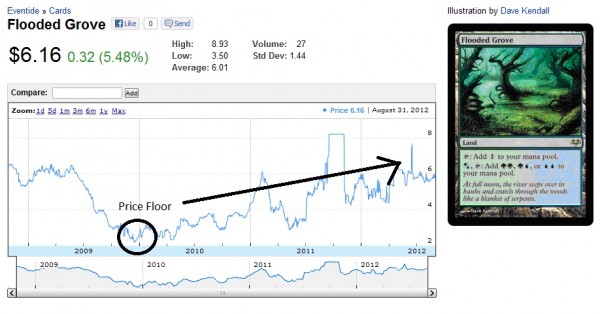 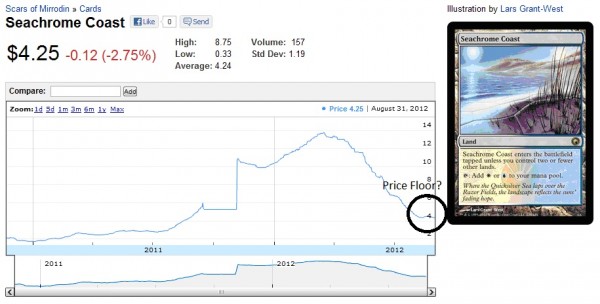 Another category of cards I actively purchase are cards which I find generally easy to move. Whether it is in trades or sales, I always strive for high turnover in my binder. Cards that I can move quickly, especially at a premium to what I bought them at, are cards I often like to purchase.

A recent example of a card like this is Chrome Mox (chart from blacklotusproject.com). 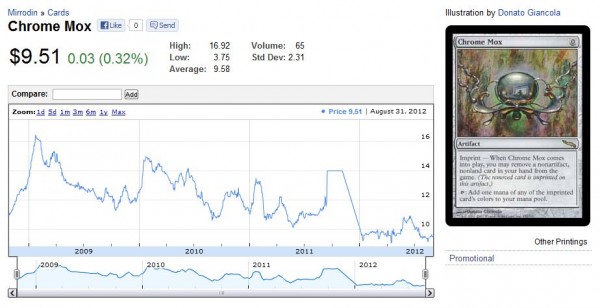 While it may appear this card has fallen out of favor, I had no difficulties moving the couple extra copies I owned at GP Boston. This card appears to move in cycles, possibly with Legacy or Modern seasons. Either way, I always like to have ubiquitous staples like these in my trade binder. Other examples include Aether Vial, Vampiric Tutor and, of course, Dual Lands.

It’s Not About The Glory Of Speculation

I am not a frequent speculator – I am way too risk averse. In fact, I’ve had a couple abysmal experiences with true speculation. Past in Flames and Skaab Ruinator were both cards I bought into with no success.

I find the easiest way to profit without major risk is to a) buy cards at the right time, b) buy into Real Estate at their price floors and c) buy into cards that are always easy to move. Perhaps this sets me apart from other finance writers. Or perhaps I’m more honest with myself when I confess I am no great guesser.

Instead, I take pride in being good at scouring the internet for good prices and timing my purchases well. This is how I’ve made my profits and I think it’s very reproducible.

7 thoughts on “Insider: Timing Is Everything”