I just got done with a very relaxing holiday weekend. I got a chance to relax and also game some Magic. Over the weekend, I got a chance to chit-chat with a good number of folks at the Local Game Store about the Return to Ravnica spoilers revealed so far, as well as Legacy. There’s a few items I want to make sure to touch on this week. Let’s start with a look at the RTR Spoilers. 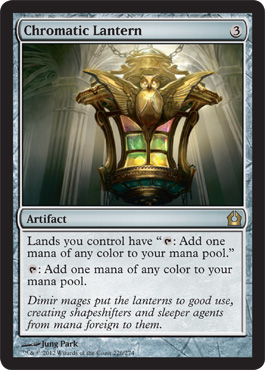 This is the card I’m most excited about thus far. This is an extremely awesome piece of artifact ramp and fixing all in one, and I expect it to see some significant play in both Commander and Standard. I wouldn’t be surprised if it made cameos in older formats like Modern too. Joiner Adept's ability on an artifact is much more resilient than a 2/1 creature and the Lantern itself taps for mana. This will be the cornerstone of any 3+ color control deck, which by the looks of the cards spoiled thus far, is not out of the question at all.

Allowing control decks to jam a large number of multi-colored spells, including charms, into their deck will give them a wide variety of cheap answer cards as well as granting the ability to finish the game with the most powerful card they can find is no joke. The fact that every 3+ color Commander deck will want a copy of this is another huge factor. This card is pre-ordering at $5 on StarCityGames.com and I think that’s a steal. I’d like to see this card hit $10 fairly quickly after it releases. 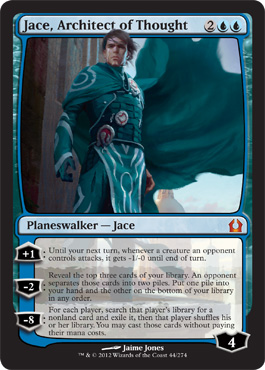 “Meh.” Was my first thought when I read this spoiler. I’ve forced myself to try and be a bit more open minded about this card, but I’m still not sure I like him. His first ability may be relevant if a token deck exists, but with cards like Intangible Virtue in the format, they can counteract his ability fairly easily. His 2nd ability is undoubtedly insane, but paying four mana to use it once is not exactly value. A deck that likes this Jace, would also likely play Tamiyo. In connection, they do stuff, kind of. Jace requires that they attack with all their creatures for less damage, while Tamiyo can tap their largest creature or draw cards from all their attackers. Tamiyo is really the strong card in this combo, but if a heavy blue control deck exists it may play some number of this Jace, but I don’t expect it to stabilize much more than $12. 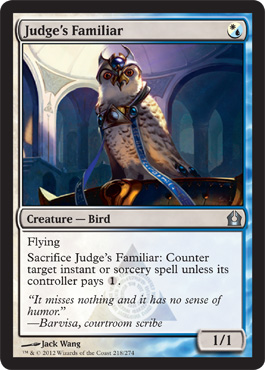 We have two aggressively costed hybrid creatures at 1-mana spoiled, and they are both going to make a splash, even though they are uncommon. The Judge’s Familiar adds Flying to Cursecatcher and also gives it to White mages. This card will undoubtedly slot into many a Modern/Legacy deck and will almost assuredly appear in next seasons iteration of Delver, whatever that may look like. The Dryad Militant is another Savannah Lions variant that will probably not see a remarkable amount of play in Standard. Both because his creature types are irrelevant, and also because Savannah Lions just isn’t as good as it used to be; however, I do expect Modern decks to play this guy to combat Snapcaster Mage. 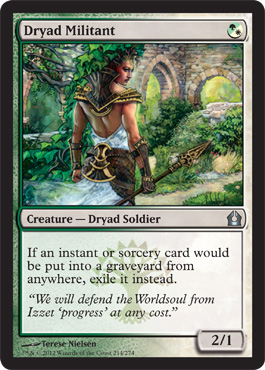 This card is difficult to evaluate. It’s cheap and it Regenerates, and it has Trample. On it’s own, sticking an equipment on him ought to be enough to end the game pretty quickly. His other abiltiy, which discards creatures to give him +1/+1 counters, is the interesting bit. I’m not sure how abusable this will be in Standard. I could see discarding a creature, and then using its Scavenge ability to pump this guy further, but I just don’t know how viable that is. Obviously, with the rotation of Vapor Snag his weakness is a bit diminished. I’m not yet ready to pick a price point on this guy, but I wouldn’t be surprised if it was the central two-drop in either a Jund or Junk aggro deck.

Well, the insane morphing of the Show and Tell deck, which turned into to Sneak-n-Show, which turned into Omniscience has now devolved into an Academy Rector deck. Some guys at my store, who have been on top of and in front of most of these Legacy changes are already looking at bringing this cycle full circle from where it started. Hive Mind. Hive Mind was one of the best cards to put into play with Show and Tell at one time, and that may be happening again. Since so much hate exists for Show and Tell players, having an enchantment that can actually be cast if need be, and wins the game immediately on resolution is a bit more desirable. Being able to Academy Rector for it directly is a bonus. Show and Tell players have been telling me that they have to use so many resources to resolve their Show and Tell they don’t have a back up plan. Hive Mind, however, simply ends the game, and allows them to play 4 more free counterspells maindeck in Pact of Negation. Hive Mind isn’t an expensive card, and it isn’t going to be, but Pact of Negation is already nearly $20, and this will only increase if Hive Mind does see more play. Not to mention that when Modern season comes it’s demand will continue to increase. It’s a risky play, but I like picking up Pacts and trying to make about $5 a piece on them right now. It doesn’t stand to lose much ground with Modern and Commander keeping it a float, so even though it’s not inexpensive, at worst it shouldn’t fall too far.

As spoilers come out until next week I’m keeping my eyes open for an sweet Control finisher and a Show and Tell hoser. Those are the the types of items I’m willing to jump in on right away. In the mean time, I’m hunting for deals on Laterns and Pacts. See you next week with more spoiler news!

One thought on “Insider: Tis the Season for the Spoils”