Spoiler season is in full swing and the paper release of Return to Ravnica (RtR) is just around the corner. WoTC has yet to officially announce the prerelease schedule for MTGO, but according to this article, the online prerelease weekend will be Friday the 12th through Sunday the 14th of October. To tide the digital masses over while paper prereleases are being held there will be a week of Cube Draft on MTGO. For speculators, this is the first bit of action related to the release of RtR that will drive the market so it's time to brush up on what has come before.

Cube Draft is expected to award out-of-print packs as prizes, so once Cube Draft and the prizes are announced, be sure to promptly sell any extra copies of valuable cards from the appropriate sets. The prices will tank on these cards because alongside the Cube will be a queue devoted to drafting the awarded out-of-print packs. The drafts that fire there will push new supply onto the market, bringing prices down. The chart of Tarmogoyf illustrates this activity as Time Spiral-Planar Chaos-Future Sight (TPF) were the first out-of-print packs to be awarded from Cube Drafts. 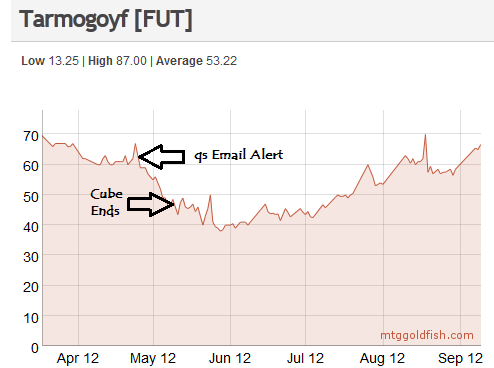 If you sold Tarmogoyf at the announcement of TPF packs as prizes for Cube (suggested in a QS Insider Email incidentally), then you could have made a tidy profit by buying them back during the draft queues. If you are caught flat footed and don't have time to sell before the prices tank, do not panic and sell your cards. Typically these queues do not make a long term dent in the price so it's better to wait it out for prices to rebound. With the Modern PTQ season coming up in December, any staple that tanks due to these queues will recover it's price in a few months.

Lastly, it's important to consider what packs will *not* be awarded through Cube. For instance, if Shadowmoor-Eventide (SHM-EVE) is not the going to be awarded, then it's quite likely that the supply of cards from these sets will see no further increases prior to the start of the Modern season. A card like Twilight Mire is a great pick up as it is a necessary for Modern Jund decks and the availability of rares from these older sets is quite low. In season, Twilight Mire was 18-22 tix. This card is a lock for profits three months down the road if SHM-EVE dodges the payouts for Cube Draft.

Are We in Ravnica Yet?

Once the online prerelease weekend hits, it will be your last chance to sell any older printings of the RtR shocklands. Fall Standard rotation occurs as soon as events start firing, so there will be a short window between prerelease and release events when the best cards from RtR will sell at a high premium. Deck builders will want to try out their new creations and the grinders will want to take advantage of a somewhat soft and undetermined field. This leads to inflated prices on the chase cards. For example, Thragtusk held 13-15 tix prior to M13 release events but is now a 4-ticket rare.

If you're holding onto Overgrown Tomb or Temple Garden, both are close to their highest price in a year and they should move even higher in the window between prerelease and release events. Prices for RtR shocklands should be 10+ tix just prior to release events. In particular, pay attention to the high and low prices that shocklands reach during this window. It's quite possible a profitable and predictable trade could repeat in the future with Sacred Foundry and Watery Grave for Gatecrash's release.

After the first weekend of RtR Limited, the shocklands will start coming down in price as release events pump a large amount of supply into the market. Although shocklands were predictable money makers in the past, it's time to put these aside as speculative tools for the medium term. Modern season will not have a large enough effect to move prices on these while packs are being cracked in RtR drafts. Any extra demand from the Modern season will be dwarfed by shifts in the Standard metagame, so make sure you sell any extra copies of RtR shocklands over the next month.

The first weekend of release events represents a buying opportunity for the newest mythics. The most hyped cards will be expensive. Don't touch these. Look for constructed-playable mythics in the 5 to 10 tix price range and buy a basket of them. These will all have potential to spike up in price depending on the whims of the market and Standard. 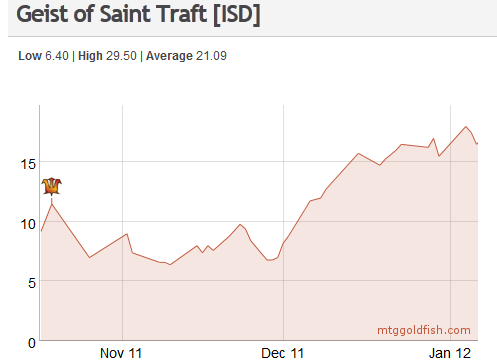 Last year, Geist of Saint Traft was in the 7 to 9 tix range for most of November. You might have overpaid a little if you bought in at release events, but it would have been worth it. Contrast this with buying Liliana of the Veil during release events. Last year, Liliana was *the* chase mythic of Innistrad and buying in during release events would have been a painful lesson on avoiding hype. During spoiler season, everyone is dreaming of a card's best outcomes, not really knowing or understanding how the Fall Standard metagame will actually play out. Don't believe the hype! 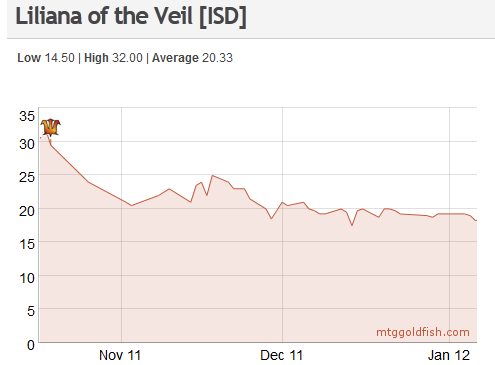 For those of us who play online, the delayed release means there is less discovery among the new cards by online players. IRL players will find some of the best uses early on for cards from RtR. By the time release events are firing, the early prices for most cards will have been determined. Some are set too high as the hype has yet to fade, and some are set high but poised to go higher. For example, Bonfire of the Damned was never available online for less than 20 tix, while paper copies were going early on for $5. By the time Avacyn Restored came out online, the word had gotten out on Bonfire.

As online speculators then, it is not worth thinking too hard at this stage about what cards from RtR are going to break out. Enjoy spoiler season and try to get out to a paper release, but pay attention to the Cube Draft announcement and plan accordingly.

3 thoughts on “Insider: Navigating Return to Ravnica on MTGO”