It's been quite a while since I've been this excited for a new set. The original Ravnica block was such a spectacular one and RtR has a lot to live up to.

I'm sure Ravnica has tons of exciting cards for Standard, Modern and Legacy, which will be covered in articles by other people. For my part, I'm going to spend time looking at what this set has to offer the world of 99 cards.

For a full spoiler of Return to Ravnica, click the image below:

I love the idea of two-color themes, which are prominently supported in Ravnica. I enjoy creating two-colored Commander decks the most because two colors usually provides enough cards for a robust theme while keeping it simple. Ravnica is the perfect set for this. There are plenty of fun two-colored gold cards as well as exciting new legendary creatures to work with.

Another bonus is that [card overgrown tomb]shock lands[/card] are being reprinted! A good chance for everyone to beef up their mana bases.

Azorius's mechanic is detain. Detained creatures cannot attack, block, or activate their abilities until your next turn. This new ability can be quite good in a format dominated by large, mana-heavy creatures. Although I could find it to be rather obnoxious when used in large amounts. Because many of detain creatures trigger when they enter the battlefield, I imagine pairing this mechanic with [card ghostway]flicker[/card] effects or [card sunken hope]bouncing[/card].

Overload lets you cast a spell using an alternative (higher) cost. When you do, all instances of "target" in the text are replaced with "each".

Wow! What a wonderful mechanic for Commander. It becomes so much more powerful when there are multiple opponents. Because of how it's worded, paying overload will hit every opponent's permanent/creature/whatever while leaving yours alone.

I will also note that overload is the perfect flavor for Izzet. I foresee using many of these cards in my Commander decks.

Rakdos's unleash mechanic lets creatures enter the battlefield with a +1/+1 counter at the cost of their ability to block. Sadly, this is quite underwhelming in Commander. Getting a +1/+1 counter isn't as much of an advantage in Commander as it is in other formats. Once you factor in the lack of defensive applications in a defense-oriented format, it seems the mechanic will rarely be worth it.

Creatures with scavenge can be exiled from the graveyard to put +1/+1 counters equal to their power on another creature. Scavenge can only be used as a sorcery, and except for one card (Slitherhead) always requires a mana cost.

The Golagari mechanic is certainly interesting. It is very thematic, but overall seems on the weaker side for Commander. I can see using a few in a deck that mills itself, but outside of that I don't see much use for scavenge cards.

Selesnya's populate puts a token onto the battlefield that's a copy of a creature token you control. The restriction is balanced by the way the populate mechanic is (usually) tacked onto cards with other effects.

This mechanic is very nice. I already have an idea for a deck that builds on this theme. The best way to use this in Commander would be to make a token deck (obviously), but one that primarily produces large creature tokens. Think Crush of Wurms.

Like scavenge, this is a mechanic your deck has to be built around. It is doable though, because of the large quantity of [card doubling season]cards that already work so well with tokens[/card].

What I'm most excited about from this set are the legendary creatures. I had mentioned in a previous article that my goal is to create a Commander deck for every color combination (27 in total) and this set provides me with some good choices for two-color commanders. 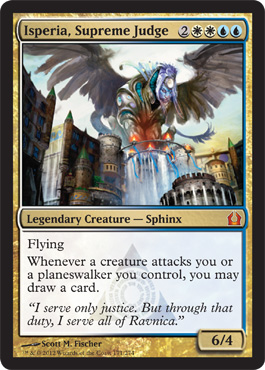 Azorius's legend is Isperia, redone for the new set. The [card Isperia, the inscrutable]old Isperia[/card] was a quality Commander, and so is the new one. I can see trying to build a defensive deck with her, punishing opponents as much as possible for attacking you. Or, you could try to force your opponents to attack you to generate card advantage.

Beyond her draw ability she is a flying Craw Wurm, which is quite nice. Her downfall is that she costs six and only has four toughness, so it won't be difficult for your opponents to deal with her.

Golgari gets Jarad, Golgari Lich Lord. This guy is insane!

Jarad has a lot going for himself. At only four mana, he should be quite large if you've built your deck around him. He has a sacrifice ability to take advantage of. If his mana cost gets too lofty, you can even let him go to the graveyard and sacrifice lands to return him to hand (where he'll always cost four).

I'm very excited to start brewing a deck for this guy. I think I'll probably scrap my other green-black deck and use Jarad instead. 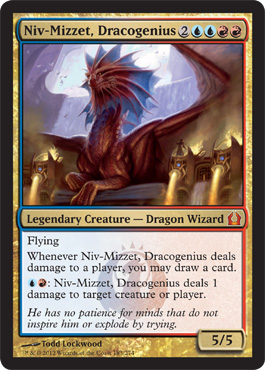 I'm pretty unimpressed with the new Niv-Mizzet. He's similar to the [card Niv-Mizzet, the Firemind]old one[/card], except he doesn't combo with Curiosity and what not. Overall he's a solid creature, but I don't find him to be Commander worthy. It would be difficult to justify him as a Commander since [card Jhoira of the ghitu]Jhoira[/card] would almost always be a better choice. He's just so difficult to build a theme around. I'm sure people will try him though, because come on, he's a legendary dragon wizard.

Another gem this set has to offer is Rakdos, Lord of Riots. He seems like a wonderful commander to build a deck around. He is cheap and very flavorful which makes for a quality deck. I like him because he encourages an aggressive Commander deck which you don't see too often. If I didn't already have a super fun red-black deck, I would make a Rakdos deck for sure.

Finally we have Trostani, Selesnya's Voice. This guy is pretty sweet. He allows for a dual-themed deck with his life gain and his populate ability. I plan on using this guy as a Commander and taking advantage of both abilities. He's also pretty durable with five toughness, and cheap at only four mana. I'm excited for this one.

I'm very much looking forward to this set, both for Limited and Commander. It has plenty of exciting cards and legends to bolster existing decks or create whole new ones. There are also several versatile utility cards, which are generally so vital to Commander decks.

One of my next articles will cover the creation of a new deck using one of these fantastic new commanders. Check back in the coming weeks to see what I can brew up!