This week is all about tech; it's about the new developments in Standard and Eternal formats and how we can see some profit. We are gonna be all over. 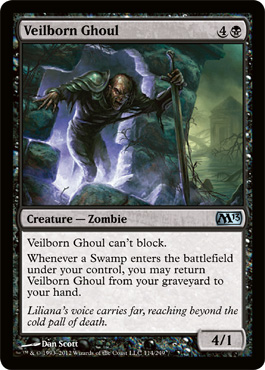 So Gerry Thompson has been all over Sphinx of the Chimes over at Starcity, and it's a card that originally just got ignored. Look, Sphinxes have not been batting very well as a tribe. Consecrated Sphinx is stellar, but her cousins Petra Sphinx and Sphinx of Lost Truths are languorous. How hard is it to get paid with Sphinx of the Chimes? Well normally, it would require running a lot of filtering and a lot of 4-ofs in your 60-card deck, and by the time you hit it, you might not need it.

Gerry circumvents all of this with Veilborn Ghoul. And if you look really hard, it does kind of look like Squee.

The idea is that you run four of the Ghouls and then you can pitch them over and over, provided that you have Swamps coming through. Gerry gets some profit in the short term with Faithless Looting, making early Ghouls live in hand. If he can drop another Swamp, he can get the Ghoul on both ends of Faithless Looting, which looks pretty incredible.

This all requires a lot of setup. The breakout card, in my opinion, is Jarad's Orders. You can get two Ghouls and get to drawing, or you can pair up the one Ghoul you've already seen with Sphinx of the Chimes and make it all play together. This seems really, really easy to set up - you spend the mana on the Orders, once, and you've got a crazy engine going (even if it only fuels Lootings). The fact that Orders and Veilborn Ghoul really punch up Lotleth Troll is just a glorious side benefit.

Sphinx of the Chimes is about 50 cents. The Orders are a bit more, at $1.25 or so. Both of these are worth getting a playset of, and if Gerry decides to actually pack Grixis at an event and does well, expect bigger returns on the Sphinx. The fact that Gerry continues to refine his Grixis list is promising.

Angels on the Rise

There are always going to be the U/W Control players, especially because WOTC singularly supports that color, year after year... Edgar Flores' U/W list has the usual Miraculous suspects. Sig wrote yesterday about how Terminus and Entreat the Angels are on the rise. Chas Andres over on SCG is also bullish on Entreat, boldly saying to buy them at $20. I don't share the same enthusiasm for the cards - I don't think Terminus is going to break much beyond $10, for example. Entreat is going to be one of those cards that you know should be worth more but doesn't get there. Consecrated Sphinx should have been worth much more, and remember that it was a lynchpin element of Caw Blade and high tech in the mirror. That cat-bird never saw much more than $12. However, Entreat the Angels is a good trade piece and it's highly liquid. That means that it's easy to move. If you can convert less easily moved cards into Entreats, that's a fine move.

Did you notice the lack of love for Supreme Verdict? Flores's list has three on the board and Jake Mondello ran a 1/1 split to 8th place in the same event, but it's not the superstar 4-of that people were expecting.

Geist is still around and will be for awhile.

Geist of Saint Traft collects rumors about his death like no other card. I'd imagine that those wishes are uttered by people like me who didn't buy it at $20 and have no interest in getting them now. Maybe the idea is "these are crap now (so sell yours to me!)." Geist of Saint Traft is still very powerful and he isn't going away any time soon. Geist also has a lot of long-term value because it's powerful in Modern. There are enough non-creature decks that an early Geist (off of Noble Hierarch?) must be handled. If we see more UW Control lists in Modern, expect Geist wars postboard. Remember that although there are a lot more creatures in Standard, Phantasmal Image and Phyrexian Metamorph have made their exits and those were two very reliable ways to kill the ghost.

I have to wonder whether UW Control will turn to both Sphinx's Revelation and Geists to beat the mirror, one going fast and the other going big.

Regarding Modern, Geist is a perfect card to hit $40 in two years, especially since it's got so much love. Remember that Dark Confidant was about $5 during parts of his printed run! Decks like UWR Delver are going to be around for a long time and Bant decks are also a big hit. Geist is an unlikely candidate for reprint, so if you want long, safe calls, this is a good one. When Geist rotates out of Standard is probably the best time to get them, but if you have them already, hold onto them.

States Results are Rolling In

The States tournaments were this last weekend, and the results are coming in at press time. Unfortunately, the results are incomplete and a lot of the states results are... well, they're from states that are not exactly known for huge turnouts and high competition. Have a look at this list for the first results. You'll notice over a dozen states, but the powerhouse states like California, New York, Ohio and more are absent at press time. Wisconsin is typically a pretty big turnout, and the presence of two midrange Jund decks there and at the SCG event last weekend is interesting. That deck uses Thragtusk and Huntmaster of the Fells // Ravager of the Fells to grind people out with Jund-style two for ones. It's going to be a consistent but boring part of the metagame. If it gets to be really established, then decks will have to have a way to fight off Thragtusk into Rakdos' Return, which is going to be a pretty serious endgame state.

Opinions are split on whether Deathrite Shaman does enough to win games and justify its place in Standard. It pops up as a 1- or 2-of in many Standard lists, which is promising. We know that this needs a long time on the board before it makes a big impact. However, I've also heard early reports that it can be quite distorting to games. Many games in the current Standard are won with single-digit life totals, and the Shaman makes grinding that down a lot easier. The Jund deck is both a scary opposite to the Shaman (because it can gain so much life) and a good reason to play it - you need things that can carry you into the long game that will whittle down big life totals. I can't suggest a buy or sell on this guy yet, but thoughtful watching is in order. It's not a sexy card, but it's a great role-player.

Will Gerry draw dozens of cards with his Ghouls? Will we see crazy tech from States? If it happens, we'll talk about it here!

9 thoughts on “Insider: Chimes, Orders, and More On RTR Standard”