Return to Ravnica, and rotation, has shaken up standard beyond all previous recognition, and now the format is starting to take shape. Normally after States there is a little slump in most of the Standard staples, but new decks do leave opportunities for big finds. The goal here is to move our inflated cards out (if you haven’t started doing so this past weekend) and use those resources to look at cards that might slot into, or change existing decks in the near term. Let's look at what to do next. 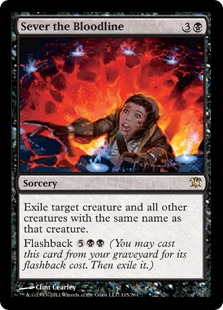 This deck appeared twice in the top 8 of the SCG open this past weekend, and we saw variation the week before splashing Red. I overheard pros at the Grand Prix talking about U/W/b control as well, likely splashing in for Lingering Souls and/or Tragic Slip and Sever the Bloodline. Sever the Bloodline is well under $1 right now, and I’m starting to stock up. This card is extremely powerful for control decks, and especially once Watery Grave and the Dimir guild hits Standard in a few months, this card will skyrocket. I’m moving in deep on this card and holding as long as it takes.

We also see the U/W Control decks Sideboarding Jace, Memory Adept to combat other control decks as well as a 5-mana removal for their opponents Jace, Architect of Thought. There was even a deck in the top 8 of this last weekends SCG Open that played one copy of Adept maindeck. At only $5, I don’t expect this card to dip much more, and has a decent chance of spiking a bit if it becomes increasingly popular to fight Jace with other Jaces. While I am not moving in big on these, I am going to pick up a couple sets and watch it closely.

We saw a Junk Tokens deck pop up, featuring Armada Wurm, Sorin, Garruk Relentless and Angel of Serenety as the Mythics. Garruk is a reasonable target here, finable on EBay close to $10, while sold out on StarCityGames at $15. I don’t expect any value he picks up to last long, while he’s a powerful card, he’s usually fairly matchup dependant. If he is indeed good right now, the format will shift around him fairly quickly. There was also a Esper Tokens brew using Favorable Winds to pump Midnight Haunting, Lingering Souls and Talrand’s Invocation Tokens. While I like where this deck is going, I don’t like that the Favorable Winds doesn’t Crusade all of the creatures in the deck. I’m not ready to make any moves based on this list as of now.

There are a variety of Reanimator decks floating around. Cheating in a Griselbrand or Angel of Serenety is big game, and until people can definitively stop it (see: Grafdiggers Cage, et al.) it will continue to be around. Since most of the Mythics in this deck are still extremely expensive, I’d like to make a move on the hate cards that will see a bit more play in the short term to counteract that. I think the Cage is a good option at $1.50 while Rest in Peace likely won’t go up much higher than its current $3.

Separately from States, there is a Modern Pro Tour right around the corner. I expect to see a strong turn-out of Storm decks, which may put a slight spike into Past in Flames and Epic Experiment, two cards that can be found fairly cheaply at the moment. Epic Experiment will only move up a dollar or so, so I wouldn’t be picking them up, but I’d be holding ones I already had for a week or so. Past in Flames however is under $2/set and is a strong play. At the worst, holding them until Modern season early next year is guaranteed to double your money (barring any bannings in the deck which I find unlikely). Fetchlands, especially the blue ones, will pick back up, but you won’t see a return on that until next year so needs to be a move you can be patient with if you want to pick up a 20-30% spike on your money.

Overall you should be moving out your RTR cards for some Innistrad and Modern cards that have potential to gain from new Standard Decks and Modern popularity spike following the Pro-Tour. Watching buy prices on RTR cards slowly fall during the Grand Prix this weekend means you’ve got to act fast if you haven’t gotten rid of things yet, but there will be some cards that bounce back, so we want to watch how low some of these shocklands fall before Modern season gets too hot. We also want to be in anticipation of the remainder of the Modern manabase including Filters and Fetches.

Lastly, finding key hate cards that will shift the matchups of the new Standard decks before they become common knowledge is a big thing. How’s the best way to find those before anyone else does? Test the format. Jam some games with friends and find out what beats the new hot strategy. What sideboard cards break the mirror open? Find a card you believe in and go for it.