Before the Return to Ravnica (RtR) prerelease weekend, it was anticipated that there would be a small window in which the newest printing of the shocklands was in tight supply. However, during this time all previous versions would be legal for Standard play. As it turned out, Standard rotated after the downtime of October 10th, despite no availability of RtR cards whatsoever! Prereleases only began at midnight of October the 12th.

This meant there was a period of a few days when online Standard was an obscure format featuring Innistrad, Dark Ascension, Avacyn Restored, M13 and half of the shocklands (plus a few other minor reprints if you want to be picky).

Once prereleases started firing the online format began to align properly with the paper format, but until then the first printings of RtR shocklands were the only available copies. Blood Crypt, Hallowed Fountain, Overgrown Tomb, Steam Vents and Temple Garden all saw a period of high demand which was mostly met by supply from the original Ravnica block.

After the latest round of Ravnica-Guildpact-Dissension (RGD) booster draft queues came down in the first week of September, the shocklands had all taken a hit in price. In light of this strange window when RtR would be Standard legal but not widely available, there appeared to be an opportunity to buy up original copies of the RtR shocklands. The plan would be to sell them to players eager to start playing Fall Standard immediately after rotation. This strategy was formulated within a QS forum discussion found here.

The shocklands from Guildpact and Dissension are more expensive due to being from 2nd and 3rd sets in a large-small-small block structure. Hallowed Fountain, for example, was routinely over 20 tix during Modern season. So it seemed like the cheaper shocklands from the eponymous Ravnica set were the only ones that promised a good chance of profit.

Trying to sell old versions of rares for more than 10 tix seemed very foolish considering 10 tix is the approximate ceiling of a rare under the current rarity structure. For the most expensive shocklands I discarded the strategy as too risky and narrowed the list of targets down to the Golgari and Selesnya shocklands.

Presented below are the trade book entries for my recent buying and selling of Overgrown Tomb. I made a profit of 59.01 tix, a return on investment (ROI) of 35%. I bought all of these copies within 36 hours after the RGD draft queues ended on September 5th.

Notice that the price on this card increased by about 25% in the two days following the end of the queues. This was due to the spoiling of cards like Vraska the Unseen, Lotleth Troll and Abrupt Decay, which were all known by September 6th. The spoilers added considerable hype to the B/G colour combination which already looked strong with the zombie shell carrying over to Fall Standard. This hype fueled a rapid price increase and by the 6th of September there were precious few copies of Overgrown Tomb left for purchase at attractive prices.

Presented below are the entries for Temple Garden. I made a profit of 70.95 tix, with a 33% ROI. In contrast to Overgrown Tomb, there was little hype for the Selesnya guild early on. But in the end it was nearly just as profitable from an ROI perspective, and gross profits were higher because more copies were available for purchase at attractive prices. Instead of a little over six playsets, I was able to buy ten.

Note that selling for this card began well in advance of online prereleases. This was partly due to the relative number of playsets acquired, but mostly because my IRL schedule had become quite busy. Selling more copies of a card in a given time frame means more work, and with a time crunch looming, it became a priority to get out of the position before the weekend. It's important to note that this was a short term trade. Holding onto depreciating assets was not in the plan, so the trade had to be exited before the start of release events opened a flood of supply.

This trade is currently repeatable with Watery Grave and Sacred Foundry. The exact same market dynamics will occur again when Gatecrash is released in early February, with spoiler season beginning in January. It's reasonable to expect a similar build up in hype once spoilers begin and thus the opportunity to sell older versions of the shocklands at a profit will repeat itself.

Again, the relative prices of the cards in question favor the cheaper shocklands from the original Ravnica set. Purchase both the Dimir and Boros shocklands and hold until the online Gatecrash prerelease. In the lead up to the prerelease, sell into the wave of interest that comes from the new set.

Do not make the mistake of thinking that February is a long way off and that there will be a better time to buy these two cards. Interest in Modern will soon ramp up and once PTQ season is underway there will be an in-season premium on shocklands.

Sacred Foundry is used in Zoo and Boros, which means it will rise from the 5-6 tix range where it is currently to the 6-7 tix range. In the past Watery Grave has seen much higher in-season prices than Sacred Foundry, though right now it's not as widely played in Modern. It typically appears as a one-of in U/W decks to enable Lingering Souls or Unburial Rites. (You can check out the latest Modern deck lists from MTGO on the mothership.) 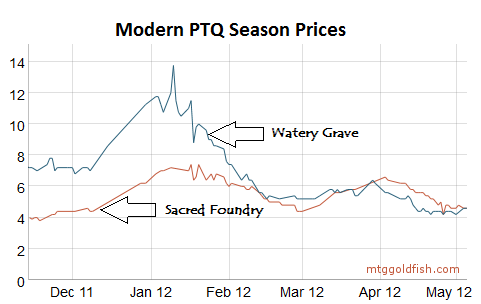 As shown in the chart above, the price for both shocklands increased just prior to the start of the PTQ season. This year, expect price increases to be sustained as the early part of the season will overlap with the release of Gatecrash. The in-season premium on these cards will reduce the potential profit on this trade enough to drive it from good to marginal.

What About the Risk?

A good practice in any potential trade is to identify the risk involved. Two sources of risk to identify here are reprint risk and a reduction in demand. The reprint risk on these cards is low because a reprint would mean the return of RGD queues smack dab in the middle of RtR as the newest release. I put the chance of this occurring as small. Demand should be stable-to-increasing due to the upcoming Modern season. Overall, the downside risk on this trade is minimal.

Speculating on MTGO real estate is consistently profitable if you can identify prices that are cheap relative to expected future prices. Current prices on Cardbot for Sacred Foundry and Watery Grave as of October 13th are 5.38 and 6.43 respectively. Buy Sacred Foundry and Watery Grave over the coming weeks while players are preoccupied with RtR release events. In the week leading up to the MTGO Gatecrash prerelease events, sell your copies into the hype.

Paying up to 8 tix on either should still lead to a small profit, but lower prices are obviously preferable. Getting in now ensures the establishment of a profitable position and avoids getting stung by higher in-season prices down the road.