This past weekend saw over 400 Magic players battle it out at the Star City Games Open in Cincinnati, Ohio. This was the first major event broadcast online with the new Standard, and there were certainly some significant shifts! The metagame will never again be the same, as evidenced by incredible number of Return to Ravnica cards seeing play as well as the Innistrad block cards not seeing so much play – namely, Delver of Secrets // Insectile Aberration.

But there was a different type of shift I noticed from this past weekend. As the tournament evolved and certain decks rose to the top, Twitter was abuzz with the cards to grab for speculation. What was particularly interesting to me was Star City Games’ effort to remain on the cutting edge of this speculation.

There were a handful of examples of this behavior. Let me explain further.

Many of the Star City Games veterans, including Todd Anderson and Brad Nelson, were on this deck. It basically consists of lots of removal spells, lots of Miracles, Jace, Architect of Thought and Tamiyo, the Moon Sage. Many of the removal spells, such as Detention Sphere, are from Return to Ravnica, but the deck relies fairly heavily on cards from Avacyn Restored, so naturally it has my attention as a speculator.

Before the event, Tamiyo, for example, was averaging $12-$14 in auction and was retailing for just a little more (chart from blacklotusproject.com). 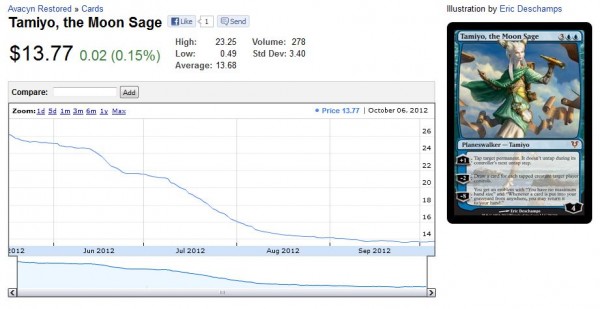 But once this deck broke the scene, Star City Games was one of the first retailers to adjust accordingly, increasing their price first to $19.99 and then $24.99. Their buy list price for Tamiyo is now $15, where as many eBay auctions are ending in this area. Clearly Star City Games wants to remain ahead of the curve, and they are almost speculating on Tamiyo here, which was only a 2-of in the deck.

They also turned an aggressive eye to the other Planeswalker in the deck, Jace, Architect of Thought, by increasing their buy price to $30 and their sell price to $49.99!

Another card that Star City Games has quickly become bullish on from this deck is Terminus. I’ve been on this card for a while after seeing it make Top 8 in major Legacy events, and the card has finally moved some. Star City Games are again on the forefront, upping their buy price to $4 and their sell price to $7.99. This is astronomically high for a board sweeper. Once again, the card usually auctions for around $4 each (chart from blacklotusproject.com). 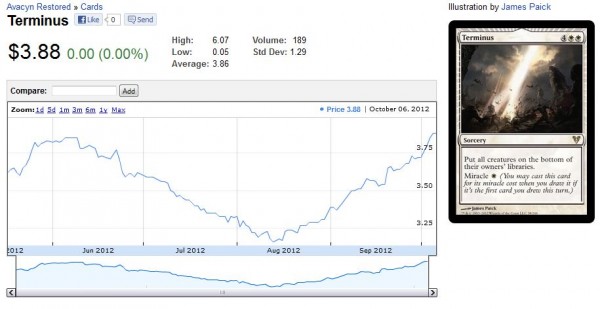 The other deck that made the finals was a remake of Frites, relying on Unburial Rites to unearth large creatures. The newest member of the team: Angel of Serenity. The only card I preordered from Return to Ravnica is likely to payoff. For those of you who joined me in buying the card when it was $6-$8, we can now immediately profit on our copies by selling to Star City Games, who is buying the card now for $10. Their sell price has been upped as well, to $19.99. 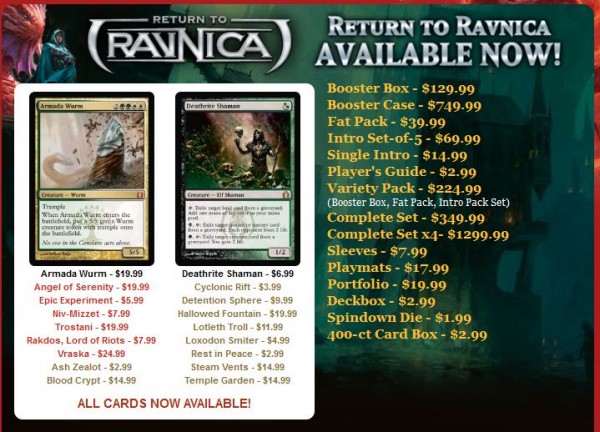 What’s surprising to me is not that Angel of Serenity is making a splash in Standard. Rather, it’s Star City Game’s immediate response to increase their buy and sell price that has me raising an eyebrow. Paying $10 on a Mythic Angel that saw play in one specific archetype may be the right move, but doing so after the first weekend the card is legal seems to me a bit gutsy.

While I’m at it, the price increase on Trostani, Selesnyas Voice is even more intriguing. Going through the Top 8 lists, I don’t see a single copy of this legendary creature. Yet Star City Games is selling it for $19.99 and buying at $10. I understand that this card is already a casual favorite, but paying $10 on the card when it reliably sells for $10-$12 on eBay seems flat out premature. 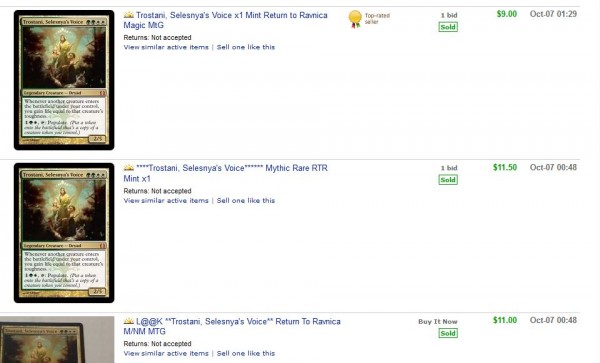 Again, I understand it’s a casual favorite, but without making an impact on Standard I’m not sure how this card is worth $20. I grabbed a few at $9 each and I intend to sell or trade them very quickly once they arrive.

I cannot discuss the Cincinnati SCG Open without at least mentioning Jund and Zombies strategies. There were three Jund decks and one Golgari Zombies deck that made Top 8, so clearly this deck is a force to reckon with.

The biggest mover I see from these lists has been Olivia Voldaren. This card is once again retailing for $15 after seeing a major pullback from its previous peak (chart from blacklotusproject.com). 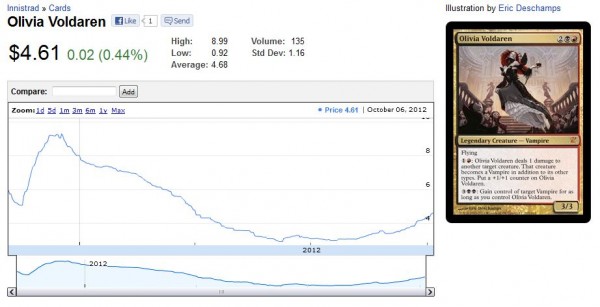 The success of this card largely hinges upon the continued success of these Jund/Rakdos strategies. I saw the card in action watching the live coverage of the SCG Open and I am on the fence. I’m not going to call this card a buy at $15 without seeing it make Top 8’s repeatedly. For now, this card will continue to be my “pick-up if cheap” play.

I also want to touch on a few cards that saw decent play this past weekend and may be due for a price increase despite not seeing an immediate price bump at Star City Games.

First, consider the Miracle Entreat the Angels (chart from blacklotusproject.com). 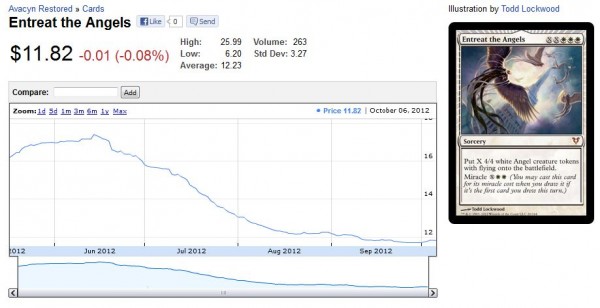 Since June this card has been on a steady decline. The chart finally appears to have reached a stable bottom, and, with three copies in the U/W/R Miracles deck, that price floor just became more stable. I expect this card to see a small bump up and I’ve bought my set in preparation for the new metagame, even if Star City Games hasn’t shifted their price just yet. 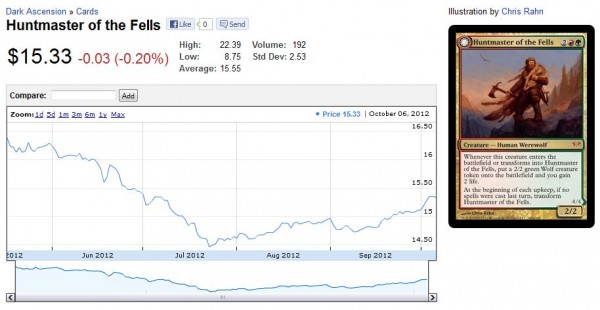 This creature has already been on a rebound since bottoming in July. Two decks in the SCG Open Top 8 ran a full set of Huntmaster, and his relevance may still be in tact post rotation. If you can find people offering this one up on the low end, it may also be worth acquiring a couple. Star City Games is selling these at $18 and I don’t see too much immediate upside from there, but should we see more Jund in the future, he seems like a mainstay in Standard.

A New Speculator In Town?

I’ve always considered Star City Games on the forefront of MTG Finance. They have many people working for them who keep their finger on the pulse of the metagame, identifying where price changes are needed. This has not changed.

Where I see a subtle difference is in their reaction time. This past weekend we saw a few cards show up in Standard decks that we haven’t often seen before, and Star City Games has moved accordingly. In some cases they increased their buy prices so high that they are paying more than the cards sell for on popular sites such as eBay and TCG Player.

Are they trying to capitalize on the hype? Are they acquiring frantically in anticipation of States? Or are they simply desperate to gather copies to meet pre-order sales?

In any case, they are definitely revealing their hand a little earlier than usual by upping so many buy prices (and dropping others, such as Vraska the Unseen to $10). Our task is to respond accordingly and to identify the cause for the rapid changes. Either way there are some profitable opportunities available to us right now if we make some wise pick-ups.

But you can’t pick up everything as the overall average value of the set will eventually drop. The trick is to pick up the cards that will continue to impact Standard after all the hype has settled down.

Here are my weekly tidbits of information. I think from now on I’ll call this section “Sigbits” to keep the explanation here to a minimum.

27 thoughts on “Insider: There’s a New Speculator In Town?”