Yesterday I was brainstorming some ideas for what to write about this week. A few readily popped into my mind and I began planning out the flow of the article.

Then I noticed something.

Terminus is sold out at Star City Games at the steep price of $9.99! You may be wondering why this would cause me to hesitate and reconsider my article for the week. Basically, much like last week, I’ve noticed some movement both on eBay and at retail that I feel is valuable to share with you.

Therefore I will postpone my creative and lasting article topics for the urgent and evanescent. In one to two week’s time, this article will only be useful for a pleasant lookback. But because of all the market momentum of the last week, I feel it is best if I summarize what’s been moving recently as this will be more valuable to the readers.

Besides, I’m selling many cards and I believe you will benefit to consider doing the same.

Personally, I feel Terminus is the most notable mover recently. It seems like just a couple weeks ago these could be had for under $4. Now these are consistently selling at $8 each on eBay, and I just tested the waters by listing an auction for four copies last night with a buy it now price of $31.98. They sold in under 24 hours.

The card must have spiked drastically and quickly because the blacklotusproject.com chart hasn’t even caught up to this one’s movement. 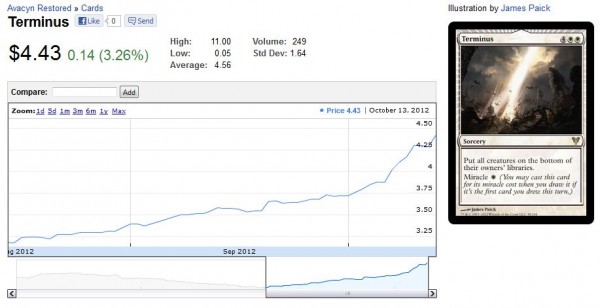 This card is on fire and it sees play at both Standard and Legacy top tables. If you can acquire these at the old price I would trade for as many as you can get. While Avacyn Restored was opened significantly less than other sets, I still feel like board sweepers have a barrier. Not many, if any, can break through $10 while in Standard, and this non-mythic rare is no exception.

I’m moving my copies now and I’d suggest you consider the same. It would take a lot to move this card much higher (see: Snapcaster Mage, which warped Standard and Legacy).

There is another Miracle card that is sold out on Star City Games, powerful in both Standard and Legacy, and is on a rapid rise: Entreat the Angels. I mentioned this card last week in my article and this card has continued to go up. Auctions are ending near $20 each and Star City Games is sold out at $24.99. I expect another price bump on this Mythic.

Once again, blacklotusproject.com hasn’t caught up yet: 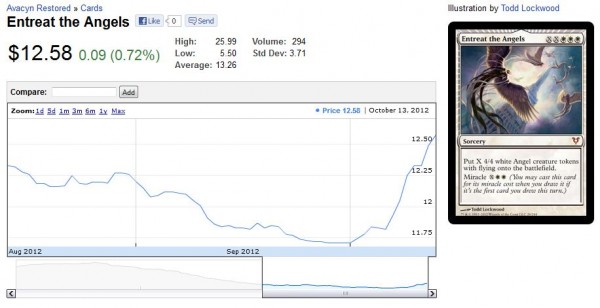 I was listening to the Star City Games commentators on Saturday and they kept referring to this card as “Encheat the Angels” because of how broken it is. If there’s a viable control strategy in Standard, this card will have a home. But I don’t see this one breaking $30 so I’m thinking of moving my copies very soon.

Not all Miracles are moving favorably. There is one in particular that seems to have been partially forgotten in the new Standard…(chart from blacklotusproject.com) 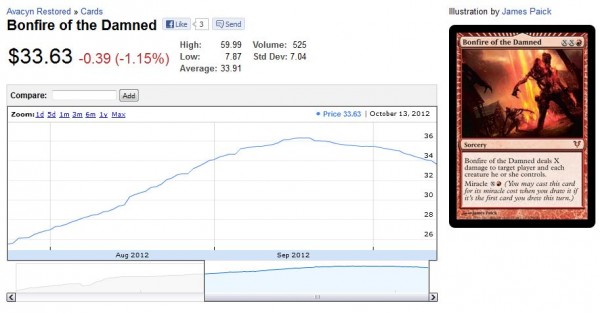 Talk about a card passing their peak. After retailing and selling out at $49.99, this card has done nothing but tumble down in price. Star City Games has ample copies in stock at… get this… $34.99!

I sold my last copy at this price a couple months ago and I hope you did as well. Some people ask me where this card will go from here. I feel the direction will continue to be down. There may come a time when this becomes a buy target again but we have a ways to go.

I took a quick look at the rares and mythic rares that appeared in the SCG Providence Open Top 8. Here’s a quick summary:

Even being in an event deck, Thragtusk has still moved very high in price. It’s an M13 rare in an event deck and it is still sold out at Star City Games at $19.99. Who would have guessed that this splashable creature, which will likely see no play in Legacy (outside of fringe Nic Fit slots), can rival a card like Snapcaster Mage in price?

I will state the obvious: if you have extra copies, you probably want to sell them.

What baffles me is the price discrepancy between Huntmaster of the Fells // Ravager of the Fells and Geist of Saint Traft. The former is $17.99 at Star City Games with a few dozen in stock. The latter, on the other hand, is sold out at $29.99. Of course one tournament should not dictate a card’s price, but I do find it interesting that both cards have become ancillary components in Tier 1 Standard decks rather than the backbone.

Either way, I think Geist is a sell here while Huntmaster is a hold.

That brings us to the fourth card on the list, which happens to be my favorite for biased reasons: Angel of Serenity. This card has definitely shifted the metagame and is now retailing for $24.99. Many people have warmed up to this creature’s power, and after seeing it in action at another SCG Open it is hard to argue otherwise. Will this Angel reach the heights of Baneslayer Angel? No, not likely. Will this Angel see play in Standard moving forward, justifying its current price tag? I certainly believe so.

That being said, I do feel compelled to sell a couple of the copies I preordered for $6. If you can double or triple up on this pickup, holding for additional gains is a bit greedy. I’m going to take my profits and invest elsewhere, even if I feel SCG may eventually up the price to $29.99.

But there are some other creatures I’m more bearish on. Olivia Voldaren has proven her playability multiple times now. The last time she ran up this high, she could not sustain her price. (chart from blacklotusproject.com) 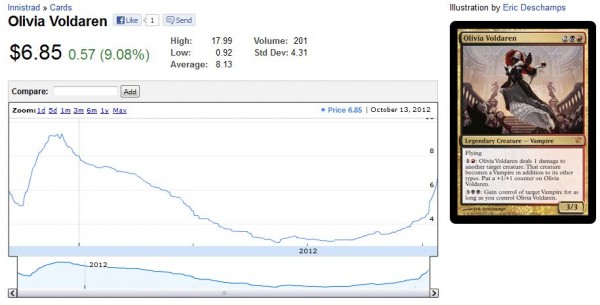 She won’t drop below $4 again, but I see her having a tough time breaking the $20 mark. If you’ve profited handily on these, I’d sell them.

I’d also sell some creatures who didn’t crack the Top 5. Falkenrath Aristocrat seems less exciting and her price $20 retail price seems overinflated. Also at $20, Armada Wurm may not hold this high without more of a presence in Standard. And Trostani, Selesnyas Voice, which once retailed for $20 and didn’t even show up in the Top 8, has now come back down to earth and is selling at Star City Games for $16.

The release of Return to Ravnica and rotation of Standard has driven a great deal of price movement in the market. During this volatile time, I’m quick to buy but also quick to sell if profitable. Some speculations may have potential to increase in price even further, but one wrong gamble and you could be left selling at a loss.

This is especially true for Return to Ravnica cards. These are all very hyped right now due to their newness and also their short supply. Until enough product can be opened to stabilize prices, many Return to Ravnica cards will remain expensive. Some, like Angel of Serenity, may have justifiably high prices. Others like Trostani will likely come back to earth as more product is opened.

I just want to caution everyone of this point. There will be opportunities for more speculation in the future. Selling some cards now, especially if significant profit is made, will enable you to rinse and repeat for next time.

10 thoughts on “Insider: Week Two of Return to Ravnica”