Magic really is a different game than it used to be. Return to Ravnica hasn’t even had its official release date and the general public already has a pretty good idea of what they can expect of the Standard metagame. As a matter of fact, many players are already finding themselves sick of the “Zombie menace”.

Personally, I haven’t been a big fan of aggressive decks for a number of years. Geralf's Messenger, while very powerful, is hardly what I look for in a haymaker. That said, being aware of how to beat the Zombie deck is the only way to produce anything viable for the immediate future of Standard. And building a viable deck is exactly what my goal is.

Let’s start by identifying the enemy. At its core, Zombies is a pile of cheap 2-power donks: 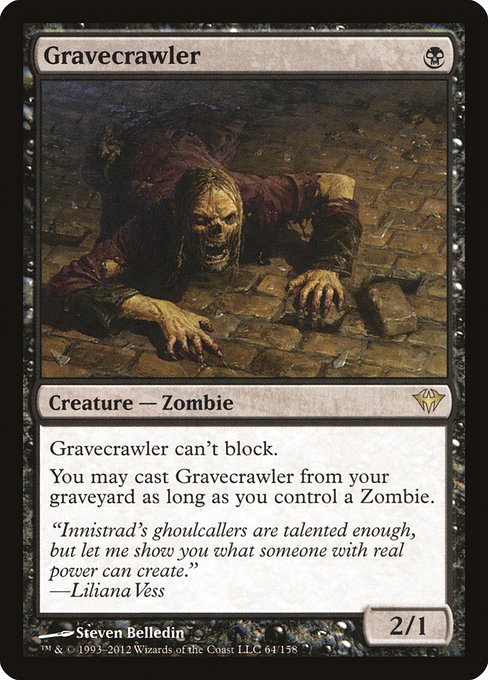 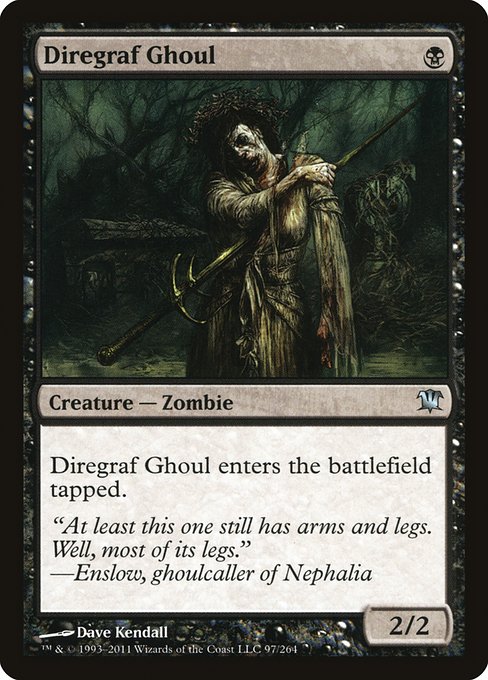 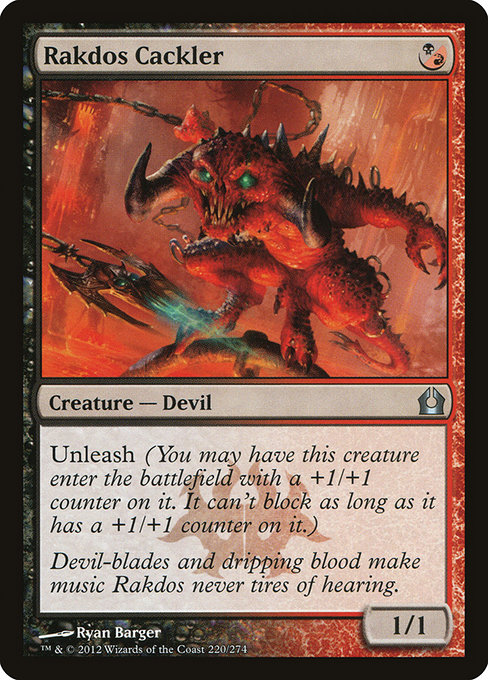 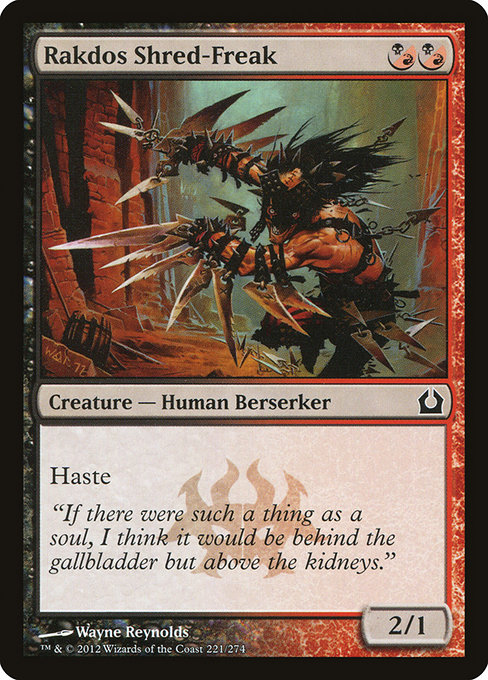 Essentially, assembling an early Mass of Ghouls is the way that Zombies attempts to beat the Thragtusk decks. Enough early pressure, combined with a good amount of reach, will pretty easily be able to deal 25 damage come turn five.

Speaking of reach, this is more or less what you’ll have to look out for when you’re trying to stabilize against Zombies: 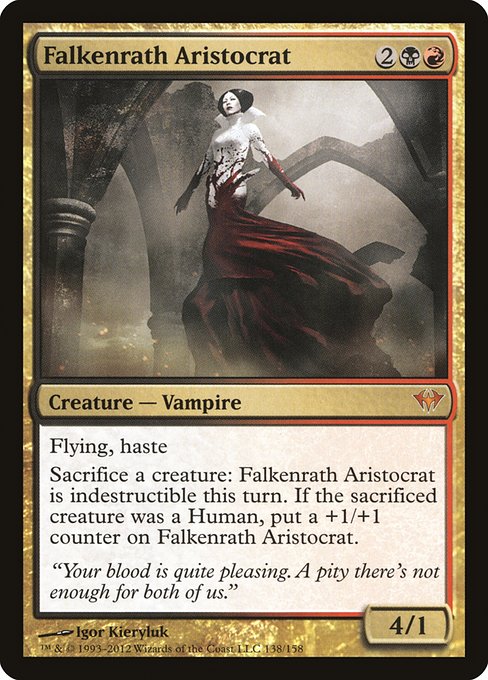 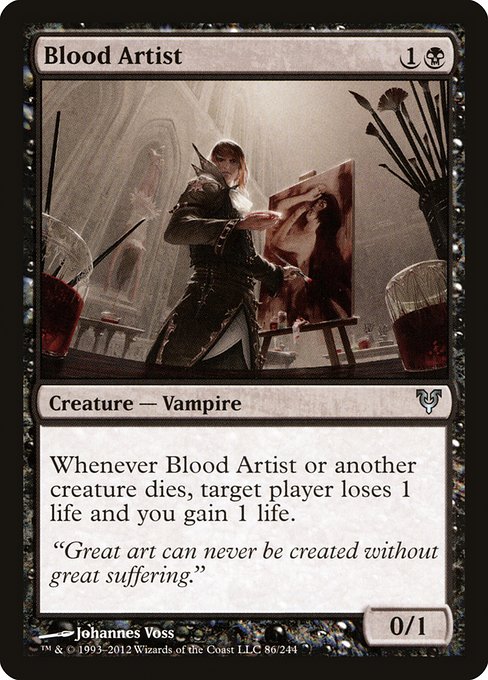 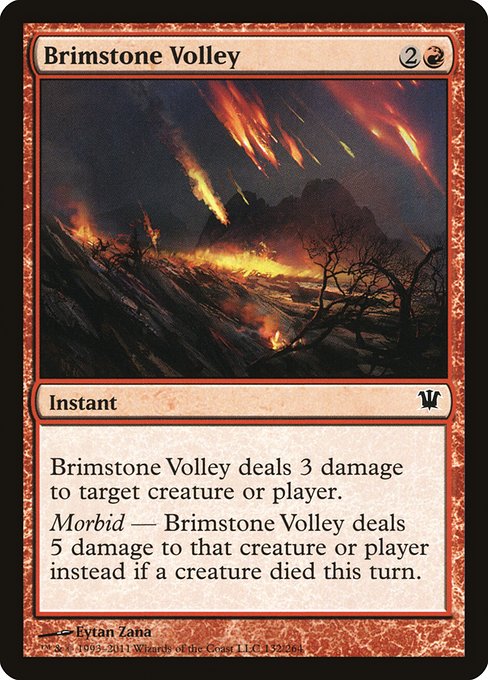 All of these cards synergize very well to produce a lot of damage. That being the case, it seems to me that generating creatures that can block their early offense, as well as having access to a healthy amount of lifegain, will be the best way to combat Zombies. Alternatively, you could try to kill them faster, but I’m the wrong person to talk to about accomplishing such a task. I’d much rather grief them in a long game. 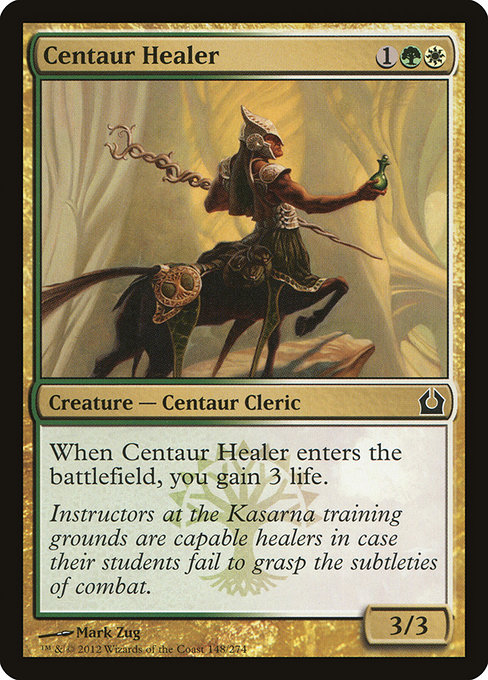 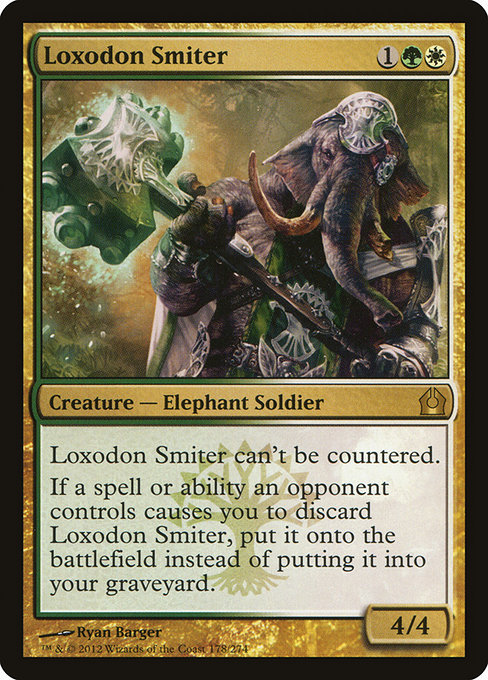 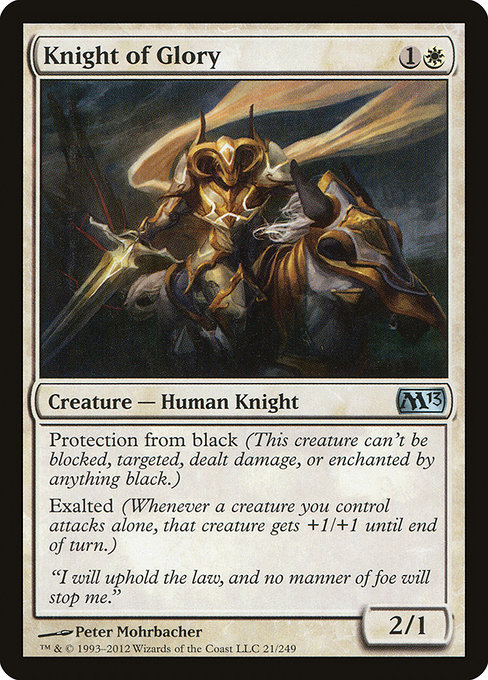 Centaur Healer is a far cry from exciting, but I’m far more interested in beating a metagame than looking cool while doing so. It blocks well and gains life, which is exactly what I think is needed.

Smiter doesn’t gain any life, but it’s able to block both halves of a Messenger, and doesn’t outright die to a non-morbid Brimstone Volley or a lone Flames of the Firebrand. I also like having the option to sandbag Smiters against potential Rakdos's Returns. I don’t think that this will be particularly relevant in the immediate future, but it definitely doesn’t hurt to be prepared. Additionally, this guy is a pretty efficient beater in situations where your opponent isn’t aggressive.

Knight of Glory is another card that isn’t particularly exciting by today’s standards, but is completely appropriate in today’s Standard. On the surface it looks to be exclusively a pre-boarded option for battling Zombies, but it carries quite a bit more weight than just that. Having an aggressive curve to battle Planeswalkers is always a good thing, and it breaks Restoration Angel mirrors, which are likely going to be a large portion of the non-Zombie metagame.

What’s that? I hadn’t mentioned that I was playing Restoration Angel yet? Let’s get these bad boys out of the way then: 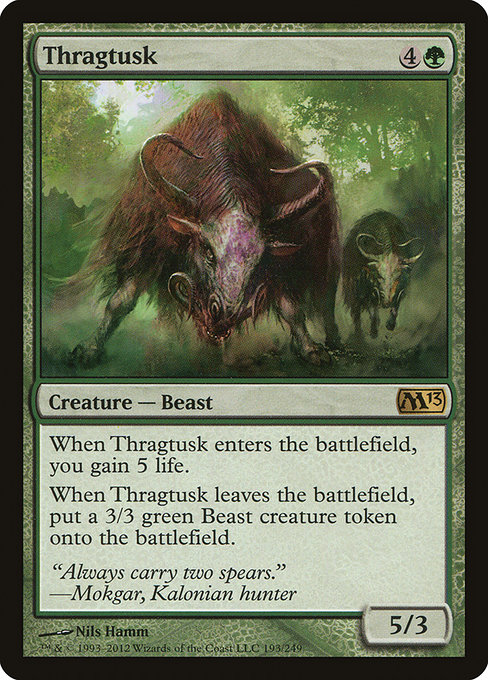 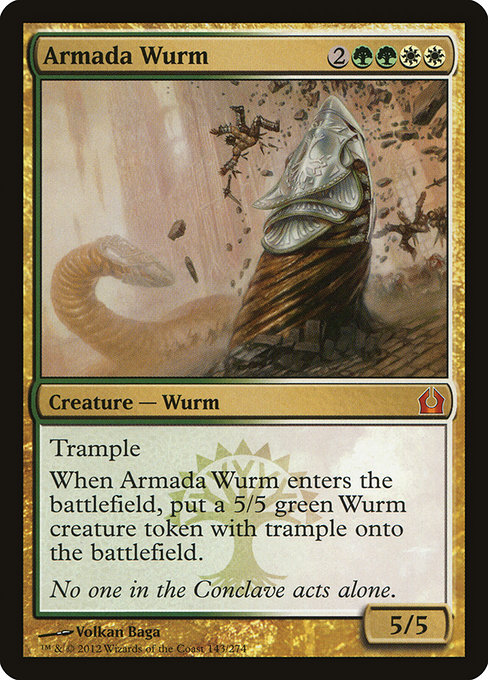 This endgame is pretty obviously insane. Gaining forty-billion life and making an army of 3/3s and 5/5s is some strong. As I mentioned earlier, the major problem is surviving to this point in the game. While I think that the above creature package manhandles Zombies pretty well, I don’t believe that blocking them into submission is a winning strategy.

A third color seems necessary for some removal. Oblivion Ring is fine, but I think that we can do better. Early in my testing I opted to battle with Pillar of Flame as it’s very good against Geralf's Messenger and Gravecrawler, but man was it ever bad against Falkenrath Aristocrat and Rakdos Shred-Freak. It was also unimpressive against the Lotleth Trolls and Dreg Manglers of GB Zombies.

If killing one toughness creatures at varying points on the curve at instant speed is important, then it’s hard to do much better than Tragic Slip. An additional boon of Tragic Slip is the flexibility to wreck up mana-dorks and giganto-bombs, such as Niv-Mizzet, alike. Being black is also sweet because it gives the deck access to Sever the Bloodline, aka the catch-all to everything, plus flashback.

All of this covers the Zombie match very well along with covering a few extra bases, but the deck still needs a way to compete with decks trying to go bigger than it. My favorite way to accomplish such a task is to draw extra cards, which makes these guys a pretty good fit: 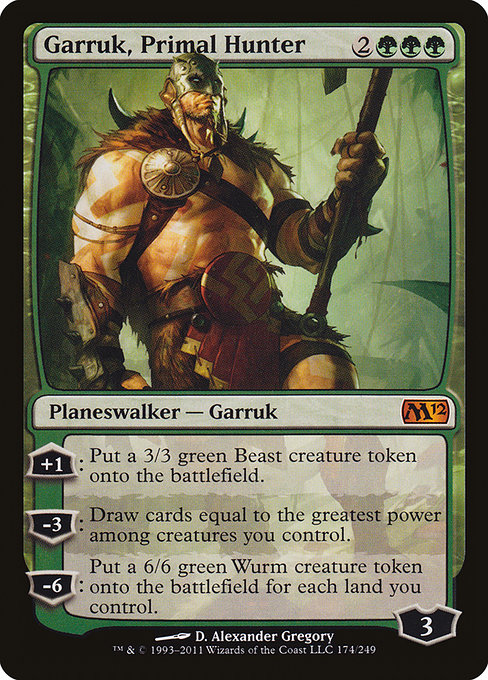 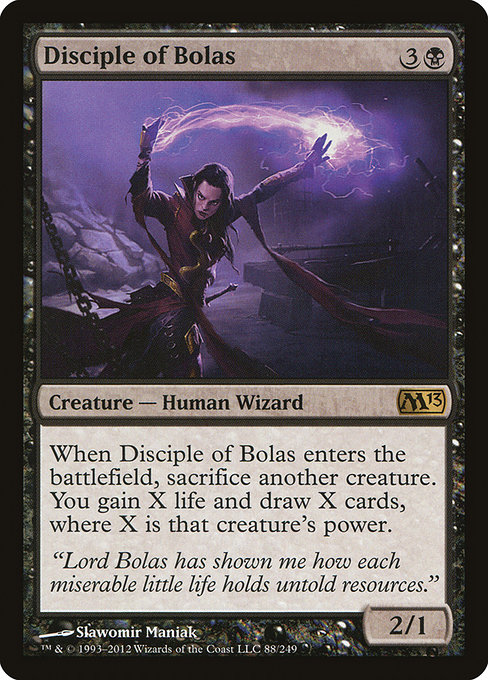 Each card has its advantages over the other, but ultimately I think that being a freakin’ Planeswalker makes me want more Garruks. The desire to avoid Planeswalker redundancy, in tandem with wanting to lower the curve a tad, makes me want at least one Disciple. Be sure to keep in mind the synergies between these guys and Knight of Glory.

Lastly, we need a way to cast our spells. GWB has the great fortune of being a three-color set that has two dual lands in Return to Ravnica, which makes building the mana base fairly easy. In decks with lower curves I’d be wary about just jamming all of the duals, but this deck doesn’t really have any turn one plays and is capable of gaining a good amount of life. If you want to play it more conservatively then feel free to mess with the manabase. A good route to go is to make room for some Borderland Rangers or Gatecreeper Vines, but I really don’t think you need them. Here is my current list:

3 Plains
2 Swamp
4 Temple Garden
4 Overgrown Tomb
1 Forest
4 Sunpetal Grove
4 Woodland Cemetery
4 Isolated Chapel
I’m not entirely certain how strong this deck is going to be as the format evolves, but I think I’ve done a pretty good job of picking cards with wide applications and/or high levels of raw power. At the end of the day it is a rock deck, so it should be able to beat most decks even if it doesn’t do so especially consistently. If nothing else, it sure beats up on Zombies.

If you have any questions or comments I’m always more than happy to address them. Until next time, good luck; high five!

41 thoughts on “Some Junk I’ve Been Working On”