If you haven’t already noticed, I absolutely love the thrill of MTG speculation. The rules of economics have always been a hobby of mine. And while actively trading on the stock market can be fun and rewarding, I simply do not get the same level of enjoyment out of owning digital representations of shares of a company as I do physical trading cards.

The lucrative aspect of the hobby is also appealing. I can seed my competitive decks while remaining active and relevant in the MTG community, often without setting foot outside my apartment (besides walking to the post office).

But even though I’ve been doing this for a couple years, I still don’t feel my “MTG funds” are as high as they could be. I’m making solid profit on most of my speculative plays, so where is all my money going?

Recently, much of my profits have been getting reinvested into additional speculation targets, but I’m starting to have trouble keeping up. Especially with the activity in the QS Forums, I’ve felt some unwanted strain in trying to dabble in all the viable speculation targets discussed. 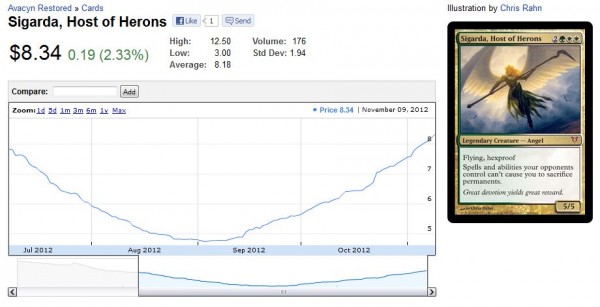 I simply do not have the excess funds (nor the guts) to go deep in all of these cards. To do so would risk the majority of my “MTG funds” and lock me out of future opportunities which may have even more upside.

So how do I proceed? This week I will discuss how I weigh whether or not to buy into a speculative card and how deep I should go. While my approach may not be a one-size-fits-all, hopefully those of you with limited funds and time will find these guidelines useful in some capacity.

It’s happened many times already. I take a quick peek at the Quiet Speculation Forums or my Twitter feed and I see discussion on a new card. Most recently it was Vengevine (chart from blacklotusproject.com). 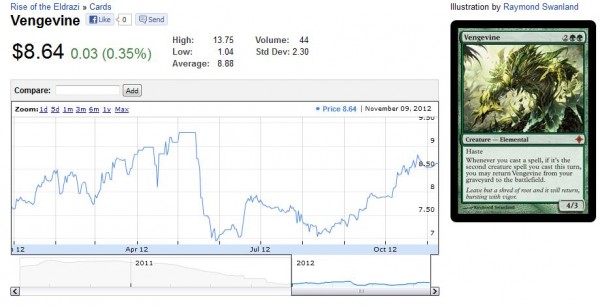 Seems like a practical choice – the card used to be a $30 Mythic in Standard, it was the third set of its block, and it has started making a splash in Modern. But after reading discussions on the forums I see that the early buyers were grabbing this card at $9 and now the cheapest copy online is $12. Is this still a buy?

Before pulling the trigger, I do some quick and dirty research. First, I see what the cheapest copies are selling for on eBay, Card Shark and Amazon. If I find any cards still priced low I do pull the trigger on those right away. It’s no surprise that most of the time this isn’t the case.

So I look at the average selling price and see that indeed $12 is the card’s value at this instant. My next step is to head over to StarCityGames.com and check a) what they are selling at, b) what they are buying at, and c) how many they have in stock. All three data points indicate a different piece of information you should weigh before buying into a spec.

The selling price tells you what you can hope to trade the card away at should you be unable to sell for profit. Cash is always king, but sometimes getting an inflated retail value on an overhyped card can also be profitable if the right trades are made. Currently the sell price on SCG is $17.99 for NM copies – a solid 50% premium above average sell prices at auction.

The buy-price is your safety net, but only to a degree. In general, I try to buy any cards I find online that are at or below SCG’s buy price, but even this can be a fallacy. Star City Games has way more selling outlets than I do and they can afford to overpay on some cards. Even though the buy price is subject to change, I use it as a general rule of thumb for what my downside risk is for this speculation. Currently the SCG buy price is $8, indicating a 33% risk should I purchase Vengevines at $12.

The number of copies in stock is the wild card – it often tips the decision for me in one direction or another. Since Star City Games always has their fingers on the pulse of the market, they are quick to modify their available quantities to reflect demand. If there are many in stock, chances are they have excess copies they are happy to unload.

If SCG’s website is out of stock, it means they are likely waiting to see where the price settles at, and a price change is more likely. For Vengevine, SCG currently has 16 non-foil copies in stock. Not a huge number, and the fact that the quantity is a multiple of 4 indicates to me they may be rationing copies out by playsets. There is no doubt in my mind that they are watching this card closely.

Vengevine is a hot card right now, many speculators are buying in. But I missed the price bottom, is there still room to grow? I could always trade them at $18 if I can’t sell for profit, but what if SCG adds more to their stock? Perhaps that $8 buy price isn’t too low after all…

These thoughts all run through my mind as I try to decide if I want to buy and how many copies I should acquire. But before pulling the trigger, there is one other part of the strategy I should consider: the exit strategy. How do I plan on unloading these cards?

The best scenario is when the card increases so much in price that I could sell to buy lists for easy profit – even if I had 50 copies. You may be able to get more, but working directly with a retailer, especially at a premier event, can net you easy cash with minimal effort. The best kind of profits are the profits you had to work very little to acquire.

Most often, I sell my cards online via MOTL, eBay, or other MTG listing site. This approach enables me to get the most for my cards albeit with some investment of effort. For more expensive plays, this can often be the favored route.

If I buy 50 copies of Might of Old Krosa (chart from blacklotusproject.com) at $0.50 each and I sell them on eBay for $4/set, it may look like I’ve doubled up on the investment. But with fees and shipping costs I’d be lucky to break even. Simply put, not many people will want to buy all 50 copies at $1 each. Retailers will, however, and even if you only get $3/set selling to a buy list, you may net larger profits. 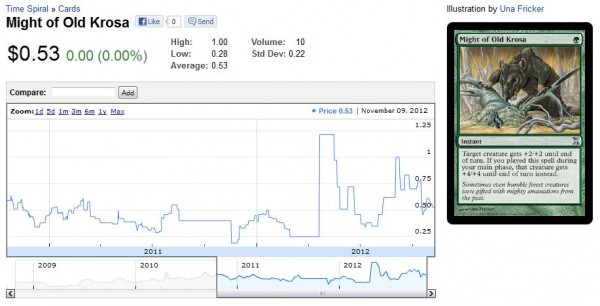 Going back to the Vengevine example, I need to realize that a buy list bump is not likely in the near term, and even if it did happen the next logical buy price would be $10. This is still not profitable. That means we’re either hoping for a significant jump in price or we plan on selling to other players / trading them away. This means more effort and more risk.

Ultimately, the decision is yours. If you feel Vengevine is destined to return to its former glory and reach $30 again, then you would of course buy heavily. My conclusion was that I think the card could have legs but there’s not a ton of near-term profit to be had. As a result, I purchased a few copies at $11 each and I’ve put a hold for now. I figure I can sell them on eBay and at least make my money back if not earn a 10% profit.

It’s all about opportunity cost. My funds are limited and I can’t chase every card that may have legs. To help me decide, I move motion aside and weigh costs/risks as best as I can. This objective approach often (but not always) prevents me from making foolhardy investments simply because of an emotional reaction.

And even after all of this analysis, the card still has to perform to make you money. This is often the unknown part and yet the most crucial. When I ran through this analysis on Nivmagus Elemental I realized there was a chance for major profit. I acquired 25 copies at around $1.25 each knowing that the card could hit $2 or even $3 on retailer buy lists. All I needed was for the card to perform well at the Pro Tour… which just didn’t happen.

A while back I wrote an article about how sealed booster boxes could be a solid, safe investment. Today I want to revisit some of the calls I made in the April 2012 article and compare them against recent completed eBay auctions. 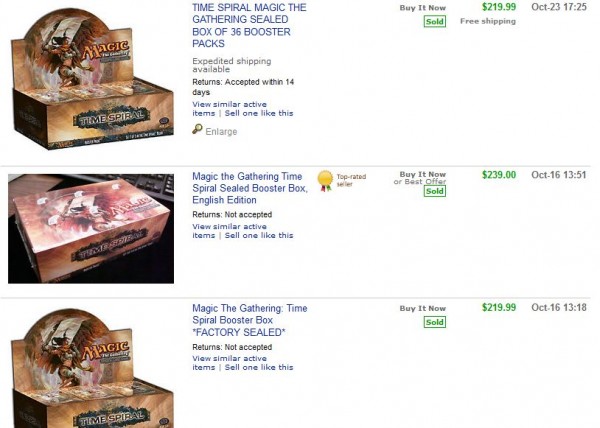 A solid $50 increase, this investment has also paid out fairly well. The casual appeal of the set combined with a few Modern/Legacy playable cards should help keep this set’s sealed product pricing stable. Without a major catalyst, however, I’m fairly confident there could be a set with higher upside potential right now (Avacyn Restored, New Phyrexia).

4 thoughts on “Insider: How to Prioritize Speculation Targets”