Around three years ago I made the realization that being a strategic Magic Card trader, buyer and seller could help me grow my collection and support my hobby. I've gone from someone who didn’t understand how a player could accumulate wealth through trading to someone who writes for a major Magic website that focuses on finance.

Through this transformation, I’ve made a few sacrifices. One of the toughest sacrifices has been my inability to justify playing Standard competitively. Often times Standard can be a fun format and, for me, being able to play with so many new cards can help to reinvigorate the game. When Legacy is stagnant and Modern is trying to find itself, Standard remains as exciting as ever with Return to Ravnica hitting the metagame.

But as a speculator first and player second, I struggle with playing Standard because of the negative impact holding Standard cards has on my portfolio. Everyone knows how Standard cards drop in value significantly as rotation approaches. Often times, the cards that face the largest price drop are also the cards that are “necessary” to own. But because they are so ubiquitous in the format, they are also often overpriced.

I haven’t played Standard in a few months and am especially regretful since I haven’t had a chance to play the new cards Return to Ravnica brought. This week I will try to assess when and how to break into Standard while minimizing the psychological barrier to entry caused by the knowledge that I may be losing value.

Thragtusk is so powerful in Standard. It combines very well with Restoration Angel and helps beat out all the removal spells available in the format. For all these benefits, the creature has a relatively aggressive mana cost. As a result, this M13 rare has reached a price that rivals even Snapcaster Mage.

I am somewhat baffled by this pricing. Thragtusk is only a rare, it only sees play in Standard, and it was printed in an Event Deck! And this Event Deck can be had for less than $24.99 at other sites like Amazon.com. 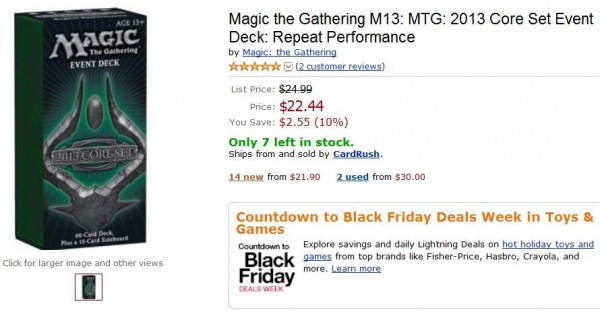 Because I focus on maintaining the value of my collection, I struggle to overcome this discrepancy in order to play Standard. I simply do not agree with the current price of Thragtusk and I personally feel the card will drop in price from here. Why anyone would buy a single copy of the card for $24.99 when they could buy the Event Deck (which also includes 1 Green Suns Zenith, 2 Razorverge Thicket and 2 Dismember) for $22.44 is beyond me.

While Thragtusk is perhaps an extreme example, many hyped Standard cards experience similar price inflation. It can even be more extreme with Mythic Rares. For example, I found it difficult to stomach paying $20 for Geist of Saint Traft. The price is even higher now, and I just know it will drop in value significantly once it rotates out of Standard (chart from blacklotusproject.com).

Don’t even get me started on Bonfire of the Damned, which peaked at the ridiculous price of $49.99 only to come back down to reality once Return to Ravnica shook up Standard. 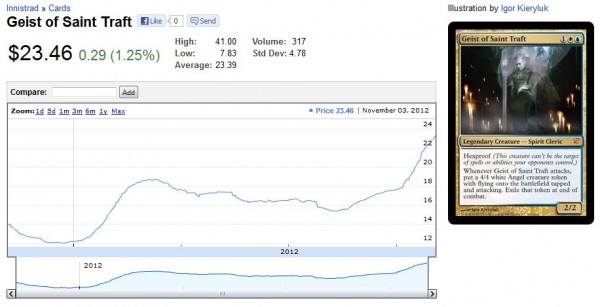 I’ve tested two different approaches to enjoying Standard while not risking hundreds of dollars. A while back I read about the discard deck that combined Megrim and Lilianas Caress.

The deck seemed incredibly fun and somewhat viable. But the best part was the deck was exceptionally cheap! Building a super-budget Standard deck can be rewarding. Stomping over your opponent’s $50 cards with commons and uncommons is a ton of fun. But this deck had two major problems associated with it.

First, it wasn’t close to Tier 1. Punishing an opponent for a sub-optimal draw was doable and did happen on occasion, but the deck wasn’t competitive enough to win tournaments. The second problem was that the deck relied on cards in two different Core Sets. As a result, while the deck cost me less than $20 to build, it was also only legal in Standard for three months. 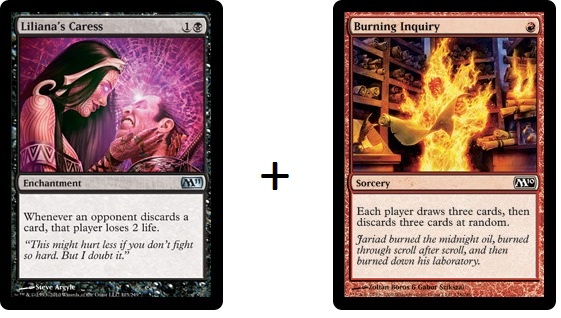 Budget decks are great because they enable you to play in Standard events cheaply, but it’s very difficult to beat all these overpriced cards. Building a better budget deck right before the format rotates can help you improve win percentages, but only for a couple months. There must be a better way.

Perhaps the only answer is to eat the potential loss in value and acquire the overpriced cards. This approach certainly overcomes the issue of not having a Tier 1 deck. And I suppose if you jump into Standard early enough, your cards will remain Standard legal for at least a year and this can justify the higher cost of entry.

With this impactful release, the metagame is sure to shift.

So while getting in early ensures my cards are playable in Standard for the most amount of time, this also sets me up to have cards that become irrelevant in a shifting metagame. If Wizards makes a new guild such as Boros or Simic overly powerful in Gatecrash, some strategies may become obsolete. Even without Gatecrash’s release, we’ve seen the rapid rise and decline of Zombie decks simply due to evolution of the metagame. Had I bought into Zombies early on, I could be sitting on a mound of expensive, undesirable cards destined to drop in price right now (chart from blacklotusproject.com). 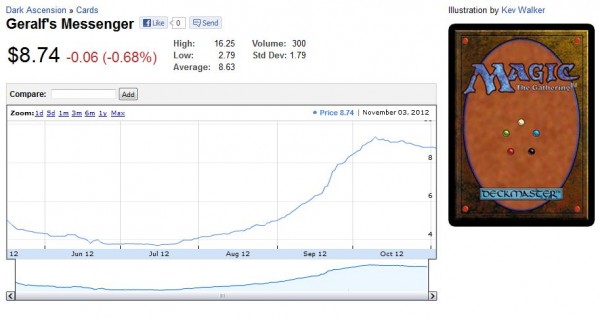 Thus, we have a delicate balance in the making.

Perhaps the best time to get in is right now. While Gatecrash hasn’t been released yet, at least the metagame has started to stabilize. Decks like Bant control, Jund midrange, U/W/R midrange, Frites and an array of UW strategies all seem to have established a level of success. And while new strategies may surface when new sets are released, these decks may be robust enough to remain relevant with just a few small tweaks.

At the end of the day the cost of Standard seems so prohibitive. I joke with other players that Legacy and Modern are significantly cheaper to get into because once you own a core group of cards you are able to play a relevant deck for years. Meanwhile, with Standard, you have to constantly acquire new cards to keep your deck fresh and viable in the current metagame. So while I spent more to enter Legacy to start with, I definitely need to spend more cash to maintain a viable Standard deck than a viable Legacy deck.

As an MTG Speculator first and player second, this has been tough for me to stomach. How do you manage?

18 thoughts on “Insider: The Value Barrier of Standard”