2012 was certainly a wild year in the world of MTG Finance. We saw brand new booster boxes selling for $130 during the launch of the most successful set of all time. We saw an influx of players driving many card prices up significantly in a short period of time. And we saw the rise of the MTG speculator, shifting the dynamic of the game to a new level never before reached.

Phew, it was a tiring year and I learned a great deal. On the personal side, my wife and I had our first child, a baby boy. We also continued to wrestle with survival in the craziness that is downtown Boston, MA. At work my old manager changed rolls leading to appointment of a new boss. So many adjustments.

I’ve also learned I need to make some significant adjustments in Magic speculation as well. But unlike the personal items above, these insights could also be helpful to others as well. Below I attempt to summarize some of my most informative takeaways from a year of speculation and finance.

Amazon Is For REAL

Some stores choose to sell Magic: The Gathering singles on Amazon.com – this isn’t really a secret anymore. That being said, Amazon.com is still one of the last places people look when buying a card on hype. The result? While major retailers, Card Shark and TCG Player all sell out of a given card, I make my move on Amazon.com for some easy profit.

I repeated this strategy numerous occasions in 2012 and I look forward to implementing it more in 2013. Examples include Sphinxs Revelation, Rhox Faithmender and Terminus. Each of these buys led to significant profit. While Amazon.com may not boast the quantities available on TCG Player, they tend to sell out just a bit slower.

I must caution buyers that the risk of vendors cancelling orders on hyped cards is present on Amazon just like any other site. Amazon, however, has one point of differentiation here which I really like: Amazon is the only site I know of that doesn’t take your money until cards have shipped! They will put a hold on your credit card, but your card isn’t charged for the cards until sellers mark their items as shipped.

So if they cancel an order, there is no hassle trying to fight for a refund. And if they took your money and then cancelled the order, you’d better believe they’d get in trouble with the powers of Amazon. If I were a vendor on Amazon, I would not want to be cancelling too many orders. This is no Card Shark. Even eBay, which has a $66.5B market cap on Wall Street, is dwarfed by the massive $116.4B market cap of Amazon. This is not a company you want to disappoint frequently.

The old saying is one I understand in theory but have difficulty implementing in practice. Despite the numerous speculative purchases I’ve made in 2012, none truly qualify as “going big”. Sure, I bought a dozen Rhox Faithmenders from Amazon the day they hit everyone’s radar. I even had around twenty Terminus from Amazon when they dipped to $2.10, even though SCG was paying $3.00 at the time. But I have never had the courage to buy many more copies of a single card.

This needs to change. To make enough profits to justify time investments, I need to develop a level of confidence that enables me to buy at least a couple dozen of a speculative card. Sometimes a speculative buy is just that – we feel a card’s price may go up should the right conditions take place. For example, Master of the Pearl Trident is an excellent card to speculate on, but we have no guarantee it will spike (no offense Corbin) (chart from MTGStocks.com). 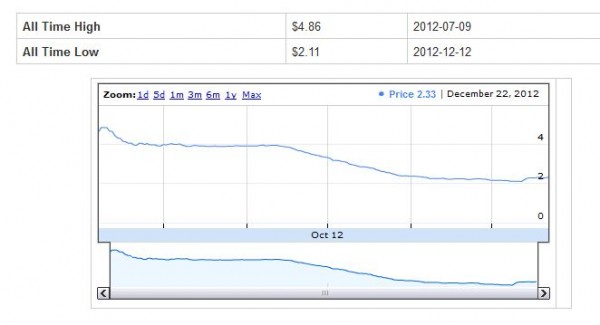 Other times we don’t have 100% confidence in a spike but we are fairly certain a card will rise in value. Innistrad Dual Lands were an excellent example – I felt confident these would jump. The same goes for something like Sphinxs Revelation, which was sure to spike once people noticed its power (chart from MTGStocks.com). 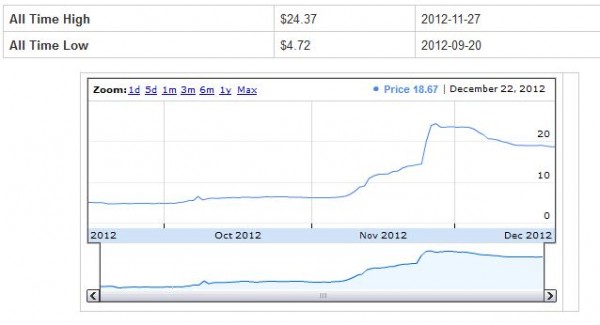 In theory, degree of speculation should be somewhat proportional to confidence in a card’s success. In other words, if I spend $50 on Master of the Pearl Trident because I am 50% confident it will spike, then I should spend much more on Innistrad Dual Lands if I am 95% confident they will spike. The logic is straight forward and seems obvious.

But the execution is daunting. Sinking $500 or even $200 into a single card intimidates me for fear of losses. Even if I am 95% confident now that something like Deathrite Shaman should go up in price, I struggle with tilting my Magic portfolio in this or any other direction. The inherent risk of losing may be small, but it only needs to be minute to be sufficient to scare me off. The psychology of loss is powerful.

In 2013 I will attempt to make adjustments here. I still may not be able to buy 100 copies of a single card, but I will make sure to go deeper on targets with more upside and higher likelihood of paying out.

Buy Lists Are Your Friend

I think I am speaking for everyone when I say eBay fees are obnoxious. They gouge you about 10% on your sales, plus they take a second dip when you get your PayPal payment. This doesn’t include the listing fee should you decide to sell your item with a fixed price in order to avoid some bad luck with an auction. The process is costly! Of course, selling on MOTL can be no better with all the sharks lurking the forums.

When MTG.GG went live, I discovered something – buy lists are awesome! Okay, most of you may have already known that, but I was shocked to see how many cards I could sell to buy lists for the same amount I’d get from eBay after fees. I used to only trust Star City Games with buy lists, but I’ve now expanded my customers to Card Kingdom, Troll and Toad, AdventuresON, ABU Games and Channel Fireball. There are so many options and so many cards with some demand that there are bound to be some items you’d be better off selling to dealers rather than eBay customers.

One recent example was a Divine vs. Demonic Akroma, Angel of Wrath. I picked one up cheaply in trade and listed it on eBay with an auction price of $16 and Buy-it-Now price around $17.89. After one week of being the cheapest copy of the card on eBay, the auction ended with no bidders. Such a nuisance.

But MTG.GG revealed to me that Card Kingdom is paying $13 on this card. Well, if my auction had sold for $16 I’d have to pay 9% ($1.44) in final value fees. Additionally, PayPal fees would have been $0.30 + 2.9% which equals $0.76. Finally, a simple plain white envelope shipping option would cost me an additional $0.65 for non-machinable postage. After all is said and done I net $13.15. So I can try to relist the item repeatedly until someone possibly bids $16 on it, thereby netting me $13.15, or I can sell the card right now to Card Kingdom for $13. Call me impatient, but I think I can eat the fifteen cents for some quick cash! 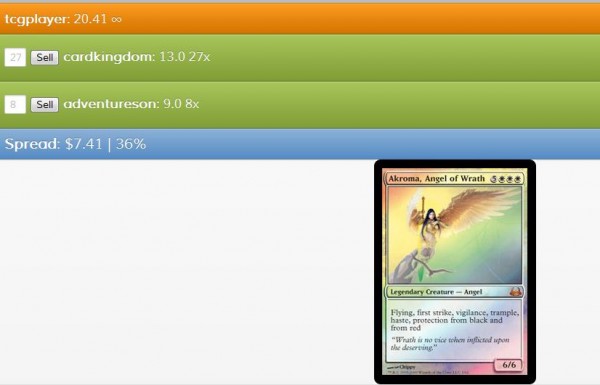 Even though I’d have to pay shipping to mail the Akroma to Card Kingdom, I can ship them some other cards in the process! I had a set of Hinterland Harbor listed on eBay for $33.19 + $1.64 for shipping. Repeating the same calculations, I would have netted $28.75 upon sale after fees and shipping. What’s more, I had to pay $0.50 to set this as a fixed price listing to avoid getting dinged with bad luck on an auction. So I net $28.25.

Turns out Card Kingdom pays $6.50 on Hinterland Harbor. Again, immediate sale of $26/4 copies to a dealer is preferable to me rather than waiting an indeterminate amount of time to make a couple bucks more (chart from blacklotusproject.com). And now I start to dilute shipping cost impact by expanding my sale!

This same practice can be applied repeatedly.

The key takeaway: always look at MTG.GG for buy list prices before listing cards for sale on a fee-based site. You just may be able to do better selling to a dealer, and with less wait.

The three major lessons I learned this year can be applied immediately. Just last week I saw sealed Chaos Reigns Planechase 2012 decks on Amazon.com for around $25. Again, some sellers may cancel their orders, but you don’t pay anything if this happens, plus it leaves a ding on the vendor. I wish I had bought these, but I was too fearful of going deep yet again.

No matter – I have gone deep on another speculative play I am confident in: Scars of Mirrodin Dual Lands. After buying eleven more copies of Razorverge Thicket from Channel Fireball for < $1.50 each, I have increased my total holding of the five Dual Lands to around 75. I’m taking this spec seriously.

Lastly, since MTG.GG was rolled out a couple weeks ago, I have already submitted five separate buy list orders. The process has been lightning fast and rewarding. As mentioned before, I will not list anything on eBay or MOTL again without first checking MTG.GG for the highest buy prices. Any opportunity to sell immediately to a dealer, even if it’s for a few percent less, is certainly worth considering.

Of course there are many other lessons learned from this past year. I learned not to go deep on a card before it’s proven out at least somewhat (thanks a lot, Nivmagus Elemental). I also learned how volatile the market can be with so many speculators and players wanting the hottest cards. Finally, I learned how easily the market can be manipulated via the recent Aluren phenomenon. All this information will help me become a better, more effective speculator next year.