Not surprisingly, I received an infant “wake-up call” in the form of a crying baby at around 5:15 am this morning. Having a son has been one of the most rewarding and challenging endeavors of my entire life. While he is absolutely adorable at this age, I cannot wait for him to be old enough to learn Magic.

To help myself shake off the early morning fatigue, I resort to two routines each morning: I have a cup or two of coffee and I check Twitter.

This morning I saw a particularly interesting Tweet from our very own Paul Feudo. 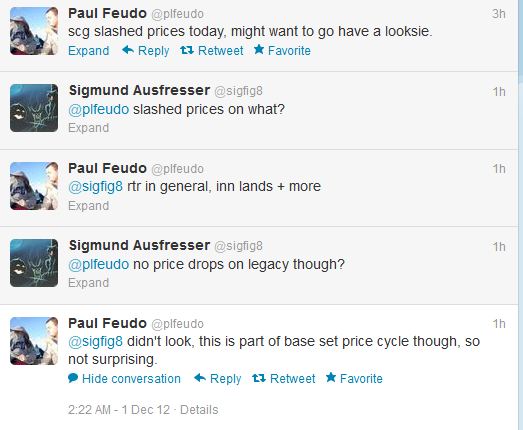 After my cup of coffee kicked in, I headed over to Star City Games to see some of the changes. Sure enough, there had been some prices slashed. This should come as no surprise as the initial Return to Ravnica hype has finally faded. After avoiding the vast majority of RTR cards like the plague the past couple months, it may finally be time to begin acquiring these strategically (although I still like AVR specs better).

One of the price reductions I noticed right away was on the lands of Standard. Shock Lands have been gradually dropping as more copies entered circulation, and Star City Games has finally joined the party.

Steam Vents, which seems to be one of the cheaper RTR Shock Lands, is down to $11.99. I remember just a couple weeks ago when SCG was still paying $8 on this and other RTR Shock Lands. Whether this was by design or not, their lowered buy price of $5 is much more in keeping with reality.

Channel Fireball went even further, reducing their buy price to $4! Needless to say, now would not be an optimal time to buylist this card. (chart from blacklotusproject; note that BLP hasn’t added RTR cards yet, so the Guildpact entry combines prices for both Guildpact AND RTR copies). 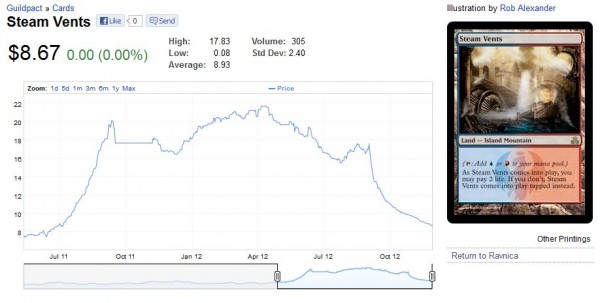 Overgrown Tomb, Temple Garden and Blood Crypt have also seen price reductions, while Hallowed Fountain seems to be the most expensive RTR Shock Land as it still buy lists at $6.

The Innistrad Duals haven’t faired much better. While Clifftop Retreat remained at $9.99 and Isolated Chapel remains at $11.99, the other lands haven’t kept their previously high prices. Hinterland Harbor has dropped to $9.99 from $11.99 despite having potential demand increase with Simic cards coming in Gatecrash. Sulfur Falls has taken a real hit by dropping to $7.99 (I hope you cashed out of these like I did). But Woodland Cemetery wins the prize dropping from previous highs down to $11.99.

Finally, these prices have been reduced to be a bit more reflective of reality. The chart on blacklotusproject.com indicates that Woodland Cemetery has peaked and is on its way down. 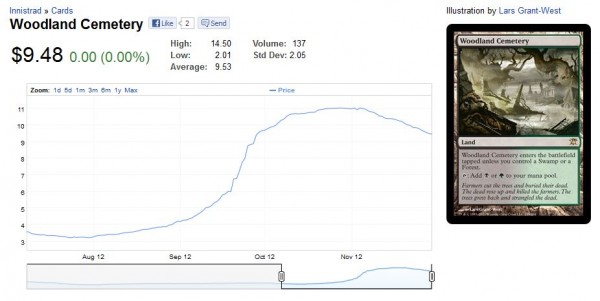 The same is true for Sulfur Falls as well. And while Hinterland Harbor and Isolated Chapel show a plateau in price on BLP, their fate may depend on Gatecrash. Regardless, there is almost no reason to acquire these for speculative purposes any longer as upside is just so minimal.

Admittedly, I have not been paying close attention to the retail prices on most other RTR cards. I knew they were overpriced at release and so I was in no rush to acquire most of them. With the exception of a few Shock Lands for Modern, Sphinxs Revelation and Deathrite Shaman, I’ve largely been staying away from RTR cards because their prices were bound to drop.

For some cards, this has happened. Abrupt Decay was once touted as a breakthrough removal spell for Eternal formats. While SCG has been resistant to dropping the price too much (it’s at $6.99), their buy price reflects their anticipated price trajectory of the card: a whopping $2. When SCG gives just 33% buy list on their cards, you know they really aren’t anxious to acquire more.

Armada Wurm is in a similar boat selling at $7.99 and buy listing for $3. Other big price drops include Dreadbore, Lotleth Troll and Mizzium Mortars. All these initially hyped cards have finally met reality. Star City Games has likely had their fill on these RTR cards and so they are in little rush to acquire more. All that original hype is slowly fading away…

When Standard rotates, I love to invest in the older block because those cards often disappear from trade binders and increase in playability. The sudden decrease in card pool means cards which once seemed underwhelming suddenly have a fighting chance.

Even as Gatecrash is released, I will still look for speculation opportunities in Dark Ascension and Avacyn Restored, as their quantities are smallest. This is likely a key reason why Terminus retails for $11.99 card while Supreme Verdict is $5.99. It’s also one reason why Craterhoof Behemoth was a safe pickup when it was hyped.

While I’m focusing on the old, prices on the new continue to drop. Eventually they will be priced favorably. Sets of Lotleth Troll are dropping to $10 and are likely ending even lower at auction. 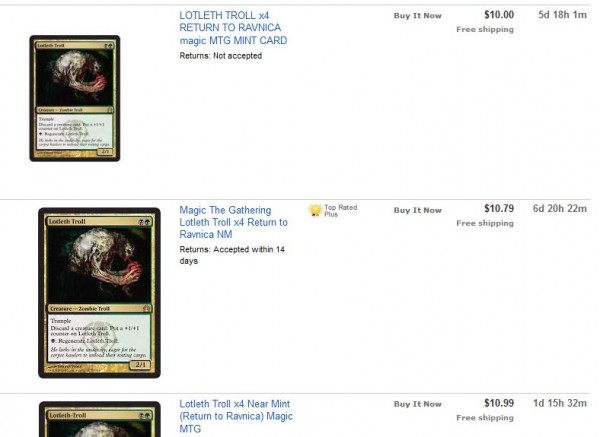 A set of Loxodon Smiters are in the same price range. Both these creatures have promise for being relevant in Standard as the metagame evolves, and thus they will become good speculation targets... eventually. The key is to acquire as close to the bottom as possible.

In my opinion, that bottom is nearly upon us. As Gatecrash spoilers begin, players will temporarily forget about the $2-$6 RTR rares. These creatures, along with spells like Abrupt Decay and Supreme Verdict, will be ignored in favor of the flashy new spells in Gatecrash. This will be the beginning of discount RTR season, and it’s when I’ll gradually trade into the underappreciated RTR cards.

The tricky part will be to identify the best bets. Last time around, it was almost a sure thing that Innistrad Duals would jump in price. Could Shock Lands see a similar trajectory? It’s possible – they’ve already been dropping and their long term price stability is likely as long as they aren’t reprinted again. But the risk is a little higher since these won’t dip to $2 like the Innistrad Duals did.

Going deep into a card like Lotleth Troll can be risky because his fate in Standard is murky at best. Should he see diminished play, his price can conceivably drop even further. I would advocate trading away RTR cards to anyone still over-valuing them and trading into RTR cards with players who are anxious to rid of them in favor of expensive Standard cards such as Terminus and Sphinxs Revelation (chart from blacklotusproject.com). 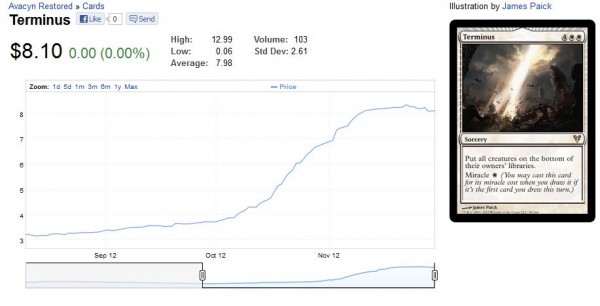 These recent price reductions are your friend. They indicate changes are taking place. Change is good because we profit on price fluctuations. Since the game of Magic is still healthy, it means that if some cards are dropping in price, others must be increasing. This time around, it will be Gatecrash cards taking center stage while RTR cards lie in the background. These are brilliant opportunities to speculate.

This is also the time for Modern cards to rise in price. Modern PTQ season is nearly upon us and players will be anxiously seeking out the cards they need for their decks. In fact, some surprising price increases have already taken place. Which brings me too…