Earlier this week, something strange and somewhat inexplicable happened – Aluren tripled in price. Everyone should be aware of this by now, but the event did trigger rather suddenly and without an obvious catalyst. I believe the MOTL thread on this phenomenal price hike accurately captures what ran through most players’ minds (thanks to Noah for summing it up so accurately and succinctly):

I included the second post (of about 34) in the picture above because it summarizes everyone’s secondary reaction. After the initial shock, everyone was left speculating on why the card would jump so suddenly. Did the deck win a major event? Did Imperial Recruiter get reprinted as a Judge Promo? Did a new card in Gatecrash that breaks Aluren just become spoiled? Or did someone decide Aluren is now going to be a $15 card and corner the market in all cheaper copies?

As of Sunday morning the answer still isn’t clear. What is clear, however, is the hindsight knowledge that Aluren meets some key criteria that would suggest it is an investment-worthy card. And it’s not the only one that meets this set of criteria. While I cannot condone buying such cards for market manipulation, picking up other cards that fall into the same camp as Aluren may help provide stability to your portfolio in the short term and some upside potential for the long term.

As the saying goes, hindsight is 20/20. Reflecting on Aluren for just a few minutes is enough to make it feel like a price hike was inevitable. I’ve drafted up a list of characteristics which made Aluren attractive for buying in hindsight:

Any card that meets all five of above criteria seems like a solid investment. Such a card has almost no downside, long term upside due to casual play, and potential for a spike should certain events take place and the card becomes popular in Legacy. What’s more, that Reserved List once again rears its ugly head in the face of MTG Finance.

But my intent is not to get into a debate on the Reserved List. It has its pros and cons. Rather, my intent is to alert you to some cards that have some or all of these five characteristics in common with Aluren, and are thus worth consideration. I’m not saying buy hundreds of these now – I’m merely saying that these cards could have just as easily been interchanged with Aluren in another dimension.

To identify the cards most like Aluren, the best starting place is a quick skim through the Reserved List. These are the older cards Wizards of the Coast has proclaimed they will never print again. Most of these cards are already in limited quantity and a guarantee from the Reserve List implies copies will only become scarcer over time. So without further adieu and starting with most recent…

Take a look at the blacklotusproject.com chart for Metalworker.

This creature has such potential in Legacy, being able to produce a broken quantity of mana with one activation. The robot has seen some Legacy play in the past and it’s currently a $10 card on the Reserved List. Seeing as it will likely never be reprinted, it could certainly break out should the right artifacts be printed. In the meantime, Metalworker remains on the fringe in Legacy and well off it’s highest price back in late 2011.

Another card worth keeping an eye on is Memory Jar. While it has seen a reprinting prior to the Reserve List announcement, quantities are still fixed going forward. The artifact already sees some play in EDH and, should it ever become unbanned in Legacy, the card could take off. This may seem unlikely, but at just a couple bucks each you could do worse for trade throw-ins.

Other noteworthy cards include Serras Sanctum and Replenish. Both have seen some Legacy play in the past and both certainly can be useful in EDH. And while the Sanctum is a bit on the pricey side when compared to Aluren, Replenish seems to fit the Aluren mold rather well. I’m surprised no one has tried to include Omniscience and Replenish into some sort of Enchantment Reanimator deck already. It may be too weak right now, but the potential to break a card like Replenish is certainly there.

These earlier expansion sets had less broken cards than did Urza’s Block. That being said, there are definitely a handful of Aluren-like cards worth considering.

My absolute favorite is Peacekeeper (chart from blacklotusproject.com). 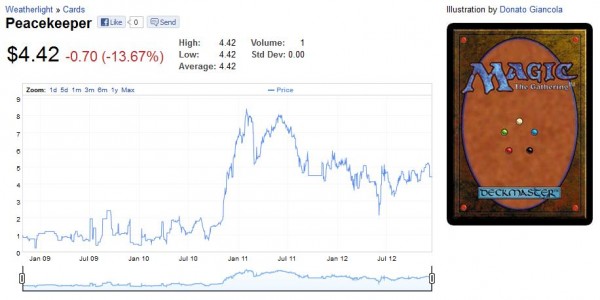 This used to be a $1-$2 card before it saw a sudden spike in early 2011. After appearing in Legacy decks, the card approached the $10 mark very rapidly. Since then the card has pulled back dramatically falling to under $5. This is my top pick because it fits all five characteristics I listed earlier. The card is cheap, has little downside due to EDH play, and has potential to strike yet again in Legacy. Finally, being on the reserved list and from an older set (a 3rd set, in fact) means quantities are definitely limited.

From Exodus, Recurring Nightmare and Mind Over Matter seem noteworthy. Both do some broken things and are legal in Legacy, though I don’t recall them making an appearance for a while. I’d keep these lower on the list but not off the list altogether.

This card became $12 almost instantly once it was unbanned but has had little impact on Legacy since then. There is a fringe deck that runs this card alongside Conflux, though it hasn’t put up any results lately, especially in light of Omniscience. What I like about this card, however, is that it doesn’t rely so heavily on Show and Tell like Omniscience does. Getting to five mana is infinitely more doable than getting to ten mana in Legacy. At $10 per playset, grabbing a few copies of this broken enchantment seems right on par with an Aluren type play.

There are a ton of other cards from these sets on the Reserved List, but in the interest of article length I cannot touch on the relevant ones in depth. Other options include Meditate, Earthcraft for potential Legacy unbanning, Paradigm Shift as a throw-in target, and Tithe. There are likely other possible targets, but these are the ones that leap out to me the most.

As you go further back in time, cards become so polarized. Either they are exceptionally breakable, such as Helm of Obedience, or they are dead to the world of constructed play, such as Lord of Tresserhorn. I mean, I suppose Lodestone Bauble could force your opponent to draw basic lands for a few turns. But if you’ve killed their basic lands (assuming they are even playing basics), why would you want your opponent to draw them again? Seems counterproductive to me.

Going back even further, the cards get more ridiculous. Legends brings with it an array of underpowered and overcosted creature cards. But there may be some hope for something like Spinal Villain in Legacy (chart from blacklotusproject.com).

Though to be fair, any Legends card with Legacy and EDH potential on the Reserved List (or Arabian Nights or Antiquities card for that matter) could be worth considering. This is how we’ve gotten to silly legendary creatures like Gwendlyn Di Corci reaching $25 on Star City Games. If people want the card for their EDH decks, they will pay for them since they are so hard to find. And if you’ve got something great in Legacy as well, that is where prices really start to get out of hand. See The Abyss, Nether Void and Moat for some obvious examples. The trick is to identify what’s next.

Speculate for Good, not for Evil

As I mentioned before, these are some Reserved List cards with some potential much like Aluren. They have key characteristics which make them investment-worthy for both slow long term growth and potential short term spiking. But I want to emphasize again that being the cause of the spike through market antics is NOT advisable. The endeavor is risky and such trends really aren’t healthy for the game. If you dislike the Reserve List because of its impact on Legacy’s growth, then please don’t be the cause for more $20 cards in the format.

If, on the other hand, you want to pick up a playset or two of these cards at some point, you might as well make your move soon. Some cards, such as Peacekeeper and Dream Halls, are very affordable right now. But with one new card or one shift in the metagame, they could both obtain their previous highs again. I wouldn’t buy dozens of these now – that type of purchase is to be done in response to the catalyst. But acquiring a few here and there in advance of the catalyst likely will not hurt given the limited downside involved.

2 thoughts on “Insider: The Aluren Phenomenon”