Right now the best opportunity, from a top down perspective, is to buy up staples from Return to Ravnica (RtR) while that set is being actively drafted and opened. Once Gatecrash is released, the new draft format will grab people's attention, forcing RtR to the background. Also, unlike in previous years, there will not be a flood of RtR cards into the market during second set release events, as Gatecrash is a large set meant to be drafted alone.

Innistrad as a Guide

In comparison, a Dark Ascension (DKA) sealed deck release event included three packs of Innistrad (ISD). This time around there will be no similar supply bump of RtR during Gatecrash release events. The chart below, taken from mtggoldfish, tracks the price of Innistrad mythics from December 2011 to the release of RtR. It illustrates the effect of DKA release events on the price of the Fall expansion. 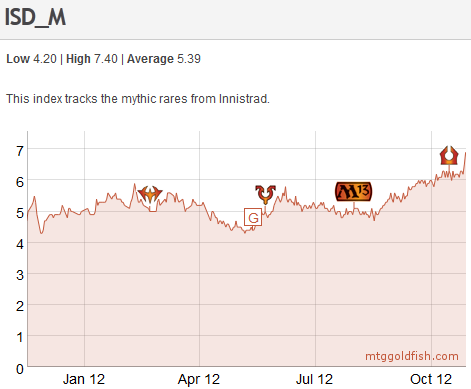 Right around the release of Dark Ascension, the Innistrad mythic index dropped to 5 tix. After release events finished, it recovered to around 5.5 tix before starting a steady decline until right before the release of Avacyn Restored (AVR). This chart is illustrative for our purposes in considering RtR cards as a speculative opportunity.

Without a long period of drafting in the Spring, RtR is set to bottom and may have already seen it's lowest average prices. The period following the DKA release events saw a steady erosion in the price of Innistrad mythics, and that simply won't occur this year for RtR mythics. They will probably behave more like the ISD mythic index leading up to and around the release of AVR, i.e. a bottoming of prices followed by a bump up around the release of the new set, followed by another flat-to-down period.

Once Dragon's Maze completes the block in the late Spring, RtR will return to being opened as the draft queues switch to DGR. However, the effect on RtR prices will be small as the new supply should be mostly soaked up by demand from redeemers.

Looking at the market trends, Return to Ravnica appears to be close to a bottom, matching the low level the digital-to-paper ratio for Magic 2013 reached in the Summer. The evidence presented here suggests that the next 6 weeks is a good opportunity for picking up cards from RtR. As a side note, interest in New Phyrexia (NPH) cards played in Modern, such as Karn Liberated and Birthing Pod, has pushed that set's digital/paper ratio to a very high level. Further gains on junk mythics from NPH will be limited.

The shocklands have all been hovering around 3 tix in recent weeks. These are the lowest risk of all the RtR rares as they should retain prices in the 2-5 tix range at the least. Anyone who is seriously speculating should be starting with shocklands and thinking about other opportunities later.

Removal in general should be a target for long term gains from RtR. Two of the most powerful cards in Standard right now, Thragtusk and Restoration Angel, make removal worse than it otherwise would be. Abrupt Decay, Detention Sphere, Dreadbore, and Supreme Verdict are all premium removal spells that will see play to some degree in the future. The first three can all be had for under 1 tix, and Supreme Verdict has been down to as low as 1.3 tix. These are fine prices to pick these cards up at. They are somewhat out of favor at the moment, but will be staples for the foreseeable future. It's not hard to imagine one of the four becoming a staple in a top deck and commanding 3 to 5 tix per copy in the future.

Counterflux is a great value pick as a junk rare. It's the only card from the "cannot be countered" cycle not seeing play currently. Counter spells have been going in and out of favor as the number of Cavern of Souls being played rises and falls, but Cavern of Souls will not be in the Standard environment forever. Down the road, the possibility of a deck needing a hard counter in the three-mana slot is a real one. Take a punt on these, pick up 20 for 1 ticket and see what happens. Paying 0.1 per copy is too much though, so if prices increase without any evidence of playability, steer clear.

Stay away from Sphinx's Revelation. This one is fully priced and too much can go wrong for it to maintain its status as the most expensive card from RtR. If Gatecrash speeds up the Standard environment, a three- or four-of mythic such as this might become a two-of or less. Things will have to work out perfectly for this card to see higher prices, and that is not the kind of bet a prudent speculator should be interested in making.

On the other hand, a card like Jace, Architect of Thought is about half the price of where it was six weeks ago. I have been happily buying this 4cc planeswalker at 15 tix. For more on my motivation for buying this card, please see the forum thread here.

Trostani, Selesnya's Voice has been in the 3 to 3.5 tix range lately, and this card screams casual appeal with some upside from potential competitive play. At that price range, with the underlying trends suggesting a bottom for RtR, this card represents a low-risk bet that will see gains in the future.

The top pick from my RtR mythic review, Vraska the Unseen, continues to see low prices. It's at 6 tix on Cardbot as of Dec 13th 2012. This card is seeing play in block constructed deck lists and I still feel that is good value.

10 thoughts on “Insider: Timing the Market”