I have a confession to make: I have a guilty, ancillary hobby to Magic: The Gathering. I collect issues of InQuest Magazine – you know, that entertaining gaming magazine with the murky-at-best card prices and mediocre constructed decks. Despite these weaknesses the nostalgia combined with my appreciation for silly, occasionally immature humor makes these magazines a delight to read.

I currently possess 62 of the 151 total issues (there was an issue 0, after all). Sadly, I made the decision to collect these magazines years after I had already thrown away dozens of issues. Still, my casual hobby must not be a popular one since they can still be readily acquired for pennies on the dollar.

I always find the price guide portion of the older issues particularly entertaining. Seeing cards like Black Lotus retail for $300 reminds me of how I used to feel that price was obscene, and now makes me feel like I’ve missed the investment opportunity of a lifetime. I could cite many more examples (Dual Lands at $10, Lions Eye Diamond at $3, etc.) but I would prefer to keep this article prospective and not retrospective.

In fact, this historical data can still be useful even 18 years later. I can use this data to help guide me in predicting what Modern Master’s impact will have on card prices. Allow me to explain…

Have you noticed some of these huge price swings? I mean, everyone is aware of Thoughtseize blowing up, thanks to the forums. But did you know that even less-obvious choices such as Cryptic Command have also soared (chart from mtgstocks.com)? 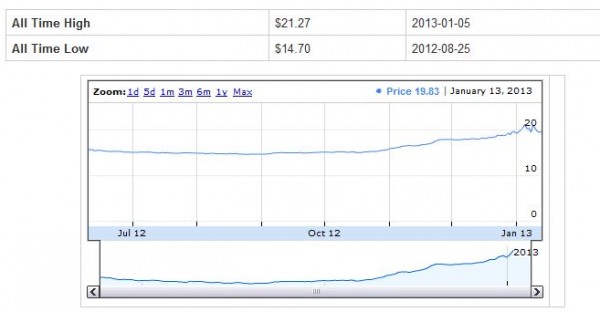 In just four months this card has gone from its seasonal low to its newest high – an increase of over 40%.

It seems every week a new Modern card surprises me with its price increase. Serra Ascendant, Auriok Champion, Verdant Catacombs and all the Eldrazi creatures have increased dramatically in the past month. This very rapid rise has been fueled by Wizards’ pledged support of the format, Modern PTQ season and Modern FNMs around the country.

The stage is set. Everyone should just drop Legacy and buy Modern for guaranteed returns on even fringe-playable cards like Damnation, right? (chart from mtgstocks.com)

Not exactly. Modern PTQ season will end in a couple months and, while players may want to keep some core cards for occasional FNM, Standard will once again dominate most topics of financial conversation. That is, until Modern Masters hits us in the summer, then that will be all anyone will be talking about.

So let me phrase it this way for the sake of this article’s point: Modern cards are at an all time high now due to a rapid increase in demand. In two months this demand will weaken as players shift their PTQ focus to Standard. In six months time demand should remain unchanged while an increase in supply occurs. Seems like we’re near a peak now and prices are almost guaranteed to drop, right?

I don’t think it’s a stretch to make the assumption that Modern cards will drop in price in a couple months, with potential for a larger drop in six months’ time. This is basic laws of supply and demand and not even a world of emotion will convince players to keep their Tarmogoyfs when $50 copies become available in Modern Masters.

Thus, a drop is inevitable. But how large of a drop? This is the primary point of contention in most debates. While predicting the movement on individual cards is very difficult, especially with only one card from Modern Masters spoiled so far, I feel historical data can be used to provide a ranged estimate for how much card prices will move in six months. 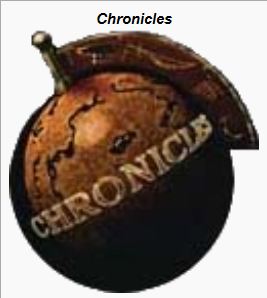 As Magic grew in popularity through 1994, some of the older cards became quite scarce. Even unplayable cards maintained some value to collectors. Then in July 1995, many card prices tumbled to a permanent low thanks to the release of Chronicles.

This 118-card set was made 100% of reprints from some of the most well-respected and coveted sets of Magic history: Arabian Nights, Legends, The Dark, and Antiquities. The concept can be appreciated by newer players who wanted to play with greats like Nicol Bolas without having to shell out serious dough. But Wizards of the Coast took the concept too far – they printed excess quantities of the set, prices tanked as demand could not keep up with huge supplies, and many stores lost significant amounts of money.

Just how much did cards tank? This all happened before the internet was everywhere, before people speculated heavily on cards, and before sites like Card Shark and TCGPlayer were very popular. However, there is one handy resource that can help us get a glimpse into what prices were pre-Chronicles… 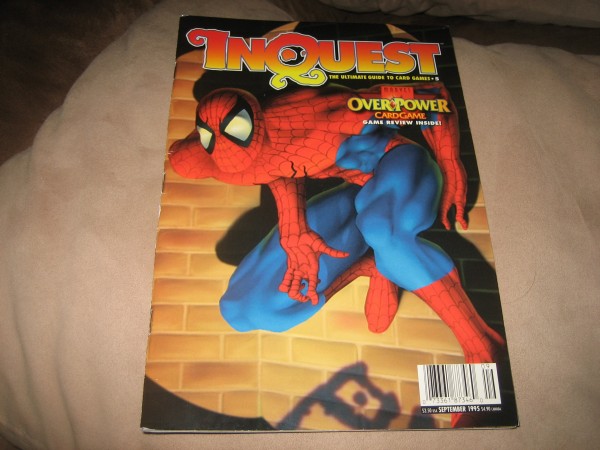 That’s right – my InQuest collection may actually help in this analysis! This issue was released in September 1995, which means it was written and printed just a month or so after Chronicles’ release – before everyone realized what was happening.

Let’s take a look at some of the reprinted card values from Legends: 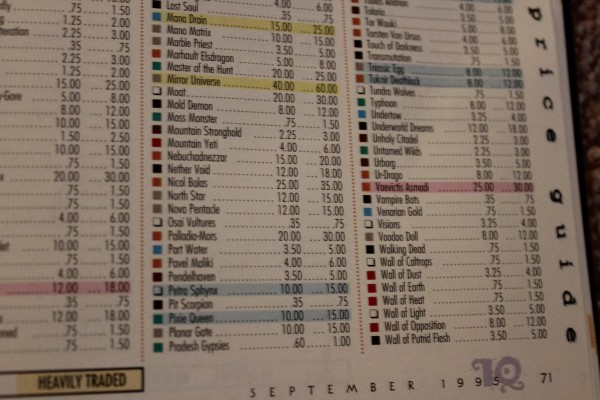 I chose this portion of the price guide to highlight some of the multi-colored Legendary Creatures everyone has grown to love (ignore the price on Mana Drain, you’ll just kick yourself again). Nicol Bolas: $25, Nebuchadnezzar: $15, Palladia-Mors: $20, and Vaevictis Asmadi: $25.

Nowadays some of these prices have recovered because players prefer these black-bordered versions over the Chronicles versions. Nicol Bolas from Legends retails for $20 while the Chronicles version retails for a smooth $2. That’s only 10%!!! And keep in mind, it took 18 years and a massively popular casual format to drive the Elder Dragon Legends back to their 1995 highs.

For a non-EDH example, we can consider what InQuest Magazine called “The Number 1 Hottest Chronicles Card”: Recall. In this issue, InQuest shows a value range of $15-$25 for a Legends Recall. While the card has gone through multiple printings since then, the Legends copy now retails for $5.99 18 years later! Not even the black border could save this card’s value, which dropped about two-thirds in price. (Chronicles versions are $0.49, by the way, once again about 10% of the original).

Other examples are aplenty, but for the sake of my point I’ll move on.

With this data, we can predict the worst case scenario for Modern Masters. Should Wizards not learn from their mistake (albeit this is unlikely) we could have $10 Tarmogoyfs, which is 10% of their current price. Sure, the original version from Future Sight may recover in price, but it may take a while. And the newer version would never be as close to financially relevant ever again. A bleak scenario indeed.

It should be kept in mind that Modern Masters will retail for $6.99 a pack as opposed to $3.99 a pack, which is likely a firewall in place to stymie the influx.

This data are eye-opening, and it really highlights what Wizards needs to avoid like the plague. Printing too many quantities of Modern Masters will hurt many players and retailers alike. Less quantities must be printed to ensure Modern Masters is not Chronicles: Part II.

Perhaps the print run will be on the scale of a From the Vaults series. Surely this is a much better scenario as quantities were heavily restricted. After all, there’s a reason sealed boxes of these still retail for $70. As a case study, let’s consider a Modern-playable card relevant to the format: Ulamog, the Infinite Gyre. Looking at historical charts (blacklotusproject.com), it doesn’t look like From the Vaults: Legends’ release in August 2011 really impacted the price much: 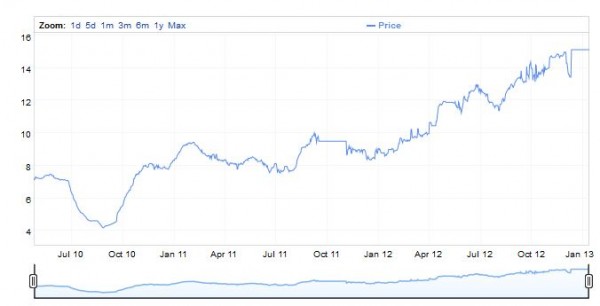 But there was been an impact – just a more subtle one. Set versions of Ulamog retail on Star City Games for $29.99. Meanwhile copies from the FTV series retail for $24.99. This is a 20% difference. A comparison to Ulamog’s partner-in-crime Kozilek, Butcher of Truth is even more interesting. The difference in foils is nothing less than drastic: set foils of Ulamog retail for $39.99 while foil versions of Kozilek retail for $79.99! That’s 100% higher!

Because the FTV: Legends version of Ulamog was foil, the impact on foil set copies was most drastic. Modern Masters (thankfully) won’t be all-foil, so this risk is mitigated drastically. Based on the case study above, we have a scenario where Modern Masters cards can be predicted to be valued around 80% of their original equivalents.

The Picture Is Unclear

Therefore, I conclude Modern Masters cards will be worth between 10% and 80% of their original equivalent. This range isn't very useful, but it enables us to make some rough predictions based on an assumption. If we expect the print run of Modern Master to be exactly in between that of Chronicles and FTV: Legends, I would expect their values to be worth about 45% of their original counterparts. This means $45 Tarmogoyfs and $27 Thoughtseizes.

These predictions don’t seem too far-fetched, in fact. Keep in mind, original versions will maintain a reasonably higher price-point. But as for making Modern less cost-prohibitive, I’d say Wizards of the Coast would be pleased with these final prices. They are much more reasonable for newer players, who can trade their Standard cards into Modern more readily.

Thus, this is where my prediction for Modern Masters will lie: MM versions of cards will, at least at first, be worth roughly half their original equivalents. The advent of the Mythic Rare makes this less clear-cut. Perhaps cards printed at Mythic Rare will maintain 75% of their original value while cards printed at Uncommon will be closer to 25%.

The true effect is difficult to predict until more cards are spoiled. But the final message is clear: you probably want to sell your reprint-prone Modern cards soon. In addition to increase in supply, emotional reactions to reprints will drop prices of original versions as well, at least initially. And if a 50% drop is possible (which isn’t unreasonable to expect on rares and certainly commons/uncommons), we should have plenty of opportunity to acquire the cards we are unloading now at a reasonable discount.