Exciting foils are always readily identifiable at Eternal events. Paying $1500 for a Legacy deck isn’t “cool” enough – players would rather spend as much as they have available to make their deck as “pimp” as possible.

Not all players have this mentality, but enough do such that the foil values of Eternal cards are always disproportionately higher than their non-foil counterparts. And while I am not a foil connoisseur myself, I do know one thing: Eternal players like their foils and this means higher values.

But I have two questions worth tackling in today’s article. First, is Modern “Eternal” enough to attract those who want to pimp their deck out? Seond, when an Eternal-playable card (Vintage or Legacy) is printed in a new Standard set, what kind of a premium is deserved, and is there potential upside?

Modern – Is it Eternal Enough?

This subject has broader implications and I have no desire to open up a deeper debate. Your feeling as to whether Modern is in the same class as Legacy and Vintage or if it’s just a Super-Extended is irrelevant in this context. Let’s focus on cards played in Modern and NOT in Legacy, and evaluate the differential between foil and non-foil prices. Remember, we are looking for differences greater than the usual 2x rule of thumb one may use in a typical Standard trade.

But the problem is this card is played in EDH as well, and EDH drives up rare foils a lot! For reference, just look at foil Bribery. The Mercadian Masques version retails for $17.99 while the foil counterpart is sold out at $59.99! So, clearly, Kozilek, Butcher of Truth is not a pure Modern card and EDH may confound its foil price.

But how about Kozilek’s questioning process: Inquisition of Kozilek? (bad joke) Although this sorcery does see a little play in Legacy, it has gained popularity in Modern. So much so, that the nonfoil version has risen to $7.99 retail (see chart below from mtgstocks.com)! 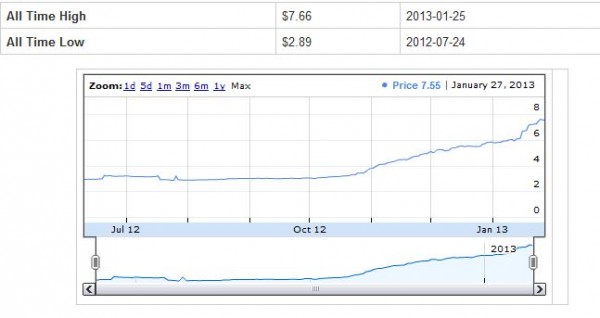 Foil versions currently are sold out for $19.99. While it’s just slightly more than 2x, there does appear to be a small premium here. So the data is inconclusive.

I’ve got a solid choice: Inkmoth Nexus. This card isn’t known for its EDH playability, and it hasn’t quite had the impact in Legacy that it’s had in Modern. Let’s check out the retail price difference between foil and nonfoil versions:

Here we have the somewhat standard “2x” price difference. While this analysis can go on indefinitely, a quick look at some data suggests that Modern alone may not be sufficient to drive greater demand on foils. It may help augment the effects of Legacy and EDH, but it hasn’t quite had the same effect as these two formats. Please feel free to present counter-examples in the comments if you have them.

Legacy and EDH Cards in Standard

I have two words for you here: Deathrite Shaman – played significantly in Modern and Legacy, foil versions of the Elf Shaman have skyrocketed much to my dismay.

I was a few bids away from purchasing a few of these at $25 a couple months ago, but I hesitated from bidding higher and lost each auction. I regret my apprehension every time I look at the most recent retail prices on this card. Foils are trading nearly four times higher than their nonfoil counterparts!

Snapcaster Mage is another great example. Nonfoil versions retail for $24.99 while foil versions are selling for $64.99! While the multiplier isn’t as high as Deathrite Shaman’s, Snapcaster Mage’s baseline is much higher. Still, we are looking at more than the normal “2x” multiplier.

Finally, the last example I want to consider before making some conclusions is Geist of Saint Traft (chart from mtgstocks.com): 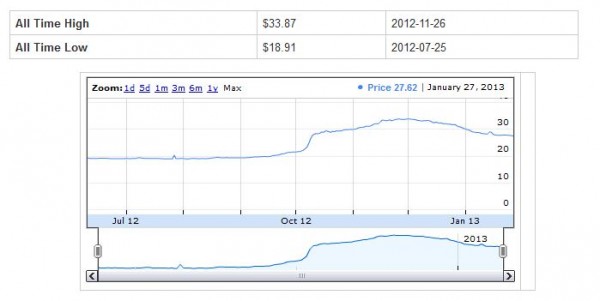 This creature is one of the most valuable in Standard, and it even sees Modern play. But without EDH or Legacy interest, foil copies of this card simply cannot demand a higher multiplier. Nonfoil versions are retailing for $27.99 and foil versions are $49.99 – less than 2x. This isn’t surprising – many popular Standard foils don’t even command that rule of thumb 2x multiplier because average Standard players aren’t very interested in foils. This is also more data that suggests Modern hasn’t had the same impact on foils as Legacy and EDH.

I see two avenues worth pursuing here. First, if you anticipate Modern will take off and slowly achieve “Eternal” status, you could move into Modern foils. Many Modern-only foils aren’t demanding much of a premium. Should Eternal players shift their focus towards Modern (if for example, Star City Games begins Modern Opens), the demand for foils may spike just like their nonfoil counterparts.

While there is some major potential here, there is some risk. The good news is downside is very limited – Modern will be here to stay, so you’d just be betting on whether or not Modern attracts the attention of Eternal players… for good. This seems very likely given enough time.

Cards worth targeting under this premise are numerous. Inkmoth Nexus, Birthing Pod, Inquisition of Kozilek, Scars of Mirrodin Dual Lands, Worldwake Manlands, etc., etc. I would suggest avoiding potential reprints in Modern Masters, of course. This is especially true for the Uncommons like Kitchen Finks, though the original set foil will still likely demand a significant premium.

The other opportunity lies in Standard cards played in EDH and Legacy which are not demanding a significant premium yet. First card that comes to mind? How about RtR Shock Lands. Steam Vents is one of the cheapest versions right now (chart from mtgstocks.com): 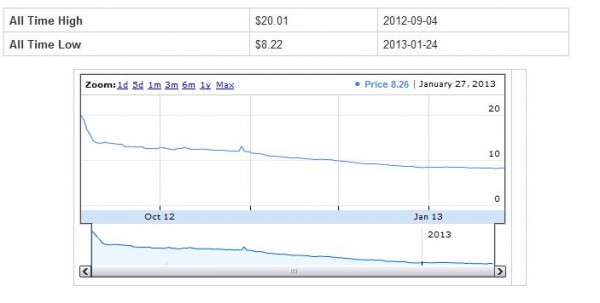 The all time low just took place a few days ago. But the Guildpact printing of Steam Vents retails for $19.99. Foil versions retail for $59.99, a full 3x the nonfoil version. This is likely due to EDH, augmented a bit by wide popularity in Modern.

But something isn’t fitting into the equation: Return to Ravnica copies are retailing for $7.99 and their foil counterparts are $19.99. This is a 2.5x multiplier, but I see no reason why it should be. I suspect once Return to Ravnica is no longer the current block, these will rise some. And for every dollar the non-foil versions increase, I expect the foil versions to increase between $2.50 and $3.00. Thus, while RtR Shock Lands are worth acquiring while they are so cheap, it’s really the foil versions that have the most upside potential.

The other example I can think of readily is Terminus (chart from mtgstocks.com). 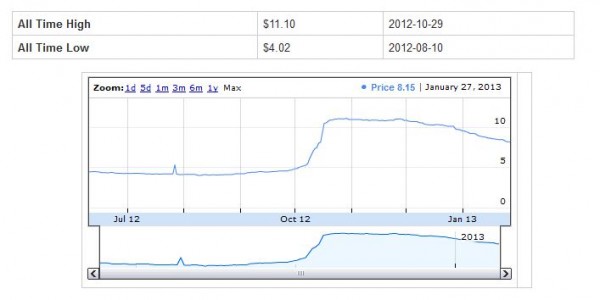 This mass-removal spell has already peaked during its time in Standard, but the card does see significant play in Legacy. Senseis Divining Top helps to ensure you can keep your Miracle spells on top of your library for an instant-speed, 1-mana Wrath during your opponents turn. Nonfoil versions have dropped in price recently, retailing for $7.99.

Meanwhile, foil versions have hovered around $19.99. This is the same 2.5x we saw on Return to Ravnica Steam Vents. The difference here is, I don’t expect the value of nonfoils to grow much for a while. So I wouldn’t acquire foil copies just yet – but come the time when Avacyn Restored leaves Standard, foil copies could be a solid long term investment.

The “Foils” in the Rough

I am not a foil specialist. I traditionally attempt to trade them away as soon as I acquire them. But recently I have attempted to reassess my view towards the shiny cards. Like mana-fixing lands, these too have predictable patterns based on their Eternal and EDH playability. And while Modern hasn’t moved the needle much on foils yet, these could be the next major Modern opportunities now that non-foil Modern Staples have all jumped significantly.

It all comes down to whether or not Modern is viewed more like an Eternal format or a Standard format. For now, the format is relatively young and unknown. But with continued support from Wizards, potential support from Star City Games, and an ever-growing card base in the format, Modern has some serious potential to be the next bit Eternal format.

This could mean 3x-4x multipliers on foil versions of Modern playables. We’re not there yet though, so in the meantime I will look to acquire foils in Standard with Legacy and EDH playability, which do not yet reflect this same multiplier. In these cases, the old rule of thumb -- 2 nonfoils for 1 foil -- can be favorable to you in the long term.