Since I've become so used to not finding anything interesting on reddit, I have fallen into the rhythm of editorializing in this part of my article instead. I haven't gotten any complaints so I've just been going with it. But the fact nothing on Reddit is worth sharing is kind of my fault, and kind of yours too.

"There's Nothing on Tonight," He Said

Instead of wishing there was better stuff on Reddit (something I did for a while) it's better to take a more proactive role.

It's been my contention that a majority of people who play Magic are casuals -- casual to the point of playing entirely off the grid. That makes these people hard to quantify and their interests hard to gauge. One thing Wizards has figured out over the years is that those undocumented players (feel free to suggest a better term in the comments) are nearly all "Vorthos," rather than "Timmy," "Johnny" or "Spike." (Not to mention the finance psychographic, which still remains ungraced with an official name.)

Wizards has done its best to make sure each set is jammed with a ton of flavor that engages casuals, especially because they are the group who buys most booster packs and precon decks, usually at places like WalMart and Target. If those people keep buying at those locations, Wizards can keep supplying them with boosters. And keeping large, steady customers is very important to a large company like Hasbro.

This matters when it comes to content on reddit. Let's have a look at today's front page. 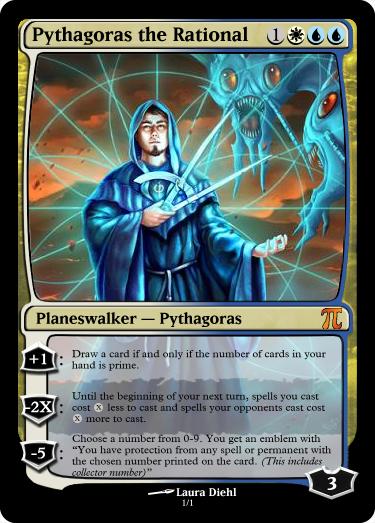 sebbyk made an EDH combo:

CakeConspiracy made a two-card combo that results in the spell Armageddon. This submission received 537 upvotes: 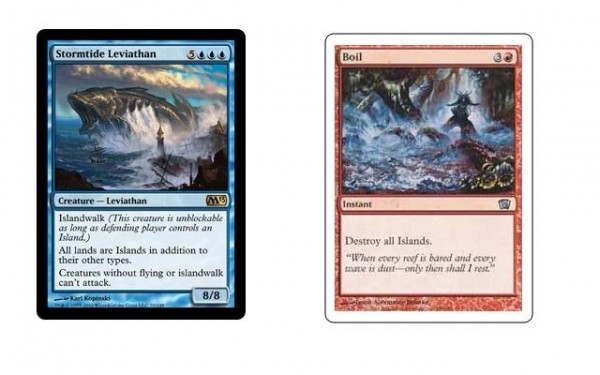 Tuques made his friend sad: 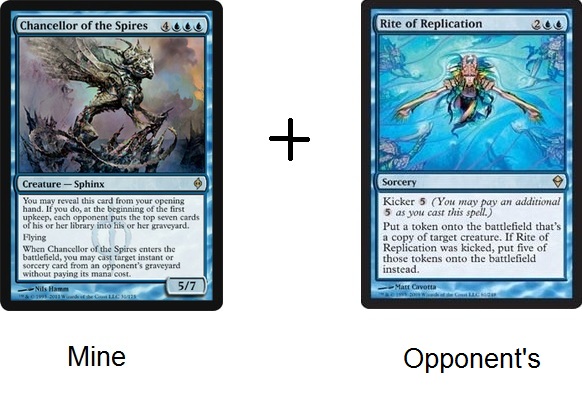 Many of you remember when I used to find the good stuff on the Magic subreddit and put it up here for you. The law of diminishing returns quickly took over. In order to get enough decent content for a week's article I was finding myself going back a week, then a week and a half, then two weeks.

So if what reddit has to offer doesn't really appeal to us, what should we do about it?

The only thing I can suggest is to be more proactive. The QS team has begun to submit more stuff from QS to the regular Magic subreddit (r/magictcg) and the results have been... mixed. None of the stuff we've submitted has quite hit the 537 upvotes merited by the fascinating picture of two cards that combine to make another one. If QS isn't for reddit and reddit isn't for QS, what's wrong?

One afternoon someone asked a really obvious finance question on reddit (I think it might have been "how come [card Thragtusk]Thargtusk[/card] cost so many money?") and I said, "Ugh, there should really be an MTG finance subreddit." Within 24 hours, r/magictcg was up and running. I think this is where QS will find the kind of content it's looking for. We need subscribers and we need new content. The great thing about reddit is you join groups based on your interests and other people with the same interests find things they think you will like. It's like having a bunch of lemmings searching the internet for you.

However, I'm currently the biggest contributor to r/mtgfinance and that means the entire sub is in danger of becoming an undemocratic representation of one man's financial sensibilities. If I don't like a writer, they don't appear. If I haven't read an article and liked it enough to submit it, no one else on the sub will read it unless they find it themselves. We all have an opportunity to grow another community -- one that, once nurtured, will find MTG finance content for us, will drive discussions that help us crowdsource answers to our finance questions and will create new potential finance wizards. The next generation of finance writers may very well use this sub as a source. This also gives us a chance to counter any misconceptions the community may have about finance and give us all potential new customers.

If you're already on reddit, please join the finance sub and link some articles I haven't yet. If you're not on reddit, join. If you don't want me to talk about this topic anymore, don't worry, I'm done.

But the one thing you can't do is complain that there's nothing good on reddit.

There was a SCG Open in San Diego.

The event was won by Static Peddler. This deck has come a long way from the durdly combo deck it used to be, characterized by Zealous Conscripts, Deadeye Navigator and losing to everything. Beating control with an army of humans that's easily recurable due to the absurdness of Angel of Glory's Rise and beating aggro with a machine-gun combo that kills creatures dead, this deck is a lot of fun to play. Unburial Rites on an Angel with Goldnight Commander and a few humans in the yard is going to be GG for most decks. It's good to see this deck win an Open. I don't know how consistent it really is, but it sure is powerful. Congrats to Joe Lossett.

Josue Rojano's deck looks pretty similar to a pile I played at FNM for lolz, only with black for Rakdos's Return, [card Olivia Voldaren]Olivia[/card] and Deathrite Shaman instead of white for Sphinx's Revelation and screwing up my mana base a little. This seems like a Jund deck with [card Izzet Staticaster]Staticaster[/card] jimmy-jammed main, which I don't really have a problem with. Olivia plus [card Nightshade Peddler]Peddler[/card] can be even more insane than Staticaster plus Peddler if you have some spare mana. I like the future of Standard.

The Esper control deck is tough to play but looks like a haymaker punch of a deck. This is control with an iron fist, and Orzhov and Dimir will only contribute more cards (not to mention two shocklands) to the archetype.

Abundant Growth is popping up a few places, including here in Andrej Selivra's GR hasty beats deck. Mana fixing and a cantrip all in one, this card seems good if you're playing Ethereal Armor, but I'm not sure what it's doing here. Still, it's hard to argue with results. Flinthoof Boar is a card that's been toyed with a bit. I think it's a bad Boggart Ram Gang, but maybe it's good enough right now. Stomping Ground (a card name I hate because the idiom is actually "stamping ground," but whatever) only improves Boar. Devil's Play over [card Bonfire of the Damned]Bonfire[/card] says that going to the face is paramount for this build. Seems easy to play, maybe try it for FNM some week.

That's all that looks new. Standard is in a holding pattern until Gatecrash, but prepare to face Peddler decks if you want to continue to play this season.

12 Post?! Nice! Legacy continues to surprise and delight. I'd like to see a few repeat performances out of this deck before I move on any of the cards, but components of this deck are affordable and if it takes off they may be good targets.

It's like last week never happened. The Jund list made top eight but there are no Elves, no BUG and generally no new decks here. Was the performance of the black-green decks at both the Open and the GP just a fluke? Time will tell. I think Deathrite is too good to stay out of the top eight for long.

Ryan Overturf disagrees, saying he doesn't think the BUG craze will last and that he will continue to jam RUG. San Diego had the same idea, and RUG was the only duplicate deck archetype in the top eight. There were three more copies of RUG in the top sixteen and zero BUG, Jund, Dark Elves or similar decks. Check out Ryan's article this week. You should find it two articles below this one.

Other than the apparent lack of what seemed like the new face of Legacy, there were few surprises here. Congrats to the top eight and to Tony Murata for getting there with 12 Post.

Before I move on, I wanted to congratulate Michigan native Josh Glantzman for winning the PTQ in South Bend, IN this weekend. I get to do things like this from time to time. It's good to be the king.

That Guy Wasn't Just Lying to His Girlfriend

There Was a GP in Atlantic City. Redditors will get the reference.

The GP showed us that Standard may be evolving a bit more than we'd thought approaching Gatecrash. Not only is Peddler huge, appearing as a 4-of alongside 4x Olivia in Brad Nelson's pile, another Limited mainstay is getting there as well.

I have always liked Ethereal Armor in Limited, and when combined with Hexproof guys it can be quite nasty. Now imagine that Hexproof guy is Geist of Saint Traft. Now imagine he also has a Rancor on him. And he's soulbonded to Silverblade Paladin. Now imagine you're sitting across the table from that noise.

The U/W Aggro deck that combined Geist with cards like Spectral Flight has gone deeper with even more auras, hexproof dudes and Increasing Savagery. Maybe you shouldn't dump all your shares into Supreme Verdict just yet! This list won the event, piloted by Jon Stern, but it also put Josh Utter Leyton in the top eight. I don't think there is any speculation opportunity on anything in this deck, but be aware of how to beat it.

Mutilate was a good spec before and now seems better. You can still get Mutilate around $2 or $3 if you're lucky, so go out there and make sure you're lucky. Wraths are going to be at a premium when spot removal doesn't do the trick. Even Olivia plus Peddler doesn't do anything against a deck full of hexproof murder machines. Hexproof with auras took Modern by storm, and if it's good enough for Modern, why not Standard too? I'm happy this worked out.

There isn't much new here other than Nelson's tech and the auras. The Geists make it hella expensive, but if you're looking for a fun FNM deck, I think you should try this. There isn't much time to play it competitively before Gatecrash hits, but it was good before Rancor and Savagery, and it's better now.

The format continues to improve and new archetypes are being developed every day. Compare this Standard to two and three years ago. No bannings, just new decks all the time, a diverse top eight and unprecedented playership. This is what competitive Magic should be.

That's All I Have to Say About That

Disagree? Hit me up in the comments of the forums. Got a question? E-mail altjason17@gmail or hit me up on Twitter @JasonEAlt. One article a week not enough? Check out the Magic Finance subreddit where all of my contributions to the community are carefully cataloged for posterity. Check here next week to see if BUG was a flash in the pan or the new face of Legacy.

10 thoughts on “Jason’s Archives: Giving Something Back”