The MTG financial market is absolutely absurd nowadays. It seems one small meme can rapidly cascade into a massive buyout frenzy, causing prices to increase multiple hundred percent in a matter of days. But this is no Harlem Shake. This meme has actual consequences.

I don’t think many people would challenge me on this claim. But for those who are skeptical, consider the top moving cards of the past week provided by mtgstocks.com:

While some of these may seem a bit out of place (Rasputin Dreamweaver), the number one mover Gyre Sage is likely tied directly to the meme that Saito was testing the card in a deck. That’s basically all it took. A rumor here, an idea there, and next thing you know our Insiders are alerted to the card’s potential and the card triples in price within a week.

While the direct cause of this is crystal clear, I suspect there are some underlying limiting factors that accelerate these price movements. What’s more, I don’t think there are such limiting factors in other markets, such as the stock market. These key differences create the wild price swings we’ve been observing and participating in, and I’m wondering if building knowledge of them would make us all wiser MTG speculators.

Return to Ravnica was the largest selling set of all time. That being said, the quantity of a given single available for sale on the internet is somewhat finite. As the average age of Magic players have increased, many speculators have a high level of funds to buy with. If I want to spend $1000 on Gyre Sages, theoretically, I could.

But there is a problem.

On the stock market, there are very large quantities of floating shares available for buying and selling. And because many publicly traded companies have valuations larger than the average Joe’s bankroll, there is essentially an infinite amount of a given stock to purchase. Consider some share numbers on Apple (AAPL) for example: 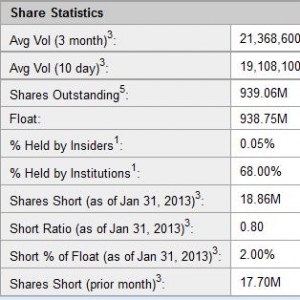 According to the Shares Outstanding number above, there are almost 1 Billion shares owned by investors. While not all of them are for sale at a given time, I’m fairly confident that at any time you can readily find thousands of shares for sale within a very narrow price range. 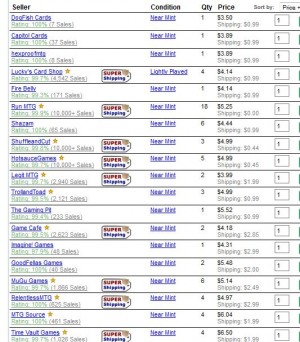 When it comes to the likes of Gyre Sage, this just is not the case. In fact, even across eBay, TCG Player, Card Shark, etc. I wouldn’t expect there to be more than a few thousand copies for sale at any given time. And this includes those daydreamers who have priced Gyre Sage at $9.99 shipped.

Key Takeaway: The MTG market is impacted much more by speculators than the stock market, even with smaller bankrolls. A healthy meme can lead to a 200% increase in a card with only forward-looking projections from third parties. The same isn’t true on Wall Street.

Another major difference between the stock market and MTG market is transaction time. When I place an order with my stock broker, I immediately obtain the shares. They are instantly in my portfolio, available for me to sell at whichever price I choose.

The same isn’t true for paper Magic. If I want to invest (speculate?) in Chains of Mephistopheles (chart from mtgstocks.com), I click buy on the copies I want and then I wait… and wait… and wait some more.

Finally a week or so later I have the card in my hands. Because price fluctuations tend to be so drastic on speculative cards, it is difficult to predict what the price will be when the card arrives. In the case of Chains of Mephistopheles, I bought the last copy from TCG Player for $70. The card is scheduled to arrive in the mail today, and by the time it’s in my hands I will have already made over 20% in profit.

Why did the price jump so much? Again it only took a couple people to desire the card at a given moment. Once enough buzz is created to get the ball rolling, the buyers come out in full force. And because Chains of Mephistopheles is especially older and harder to find, it didn’t take long to move the price. And while a record number of Chains of Mephistopheles are in the mail, an all time shortage occurs on the internet. When new copies are finally listed the price is naturally inflated.

This delay just does not happen on the stock market. It would be a dream world where I could buy a stock at $70, immediately own it, and have it be worth $85 once the transaction is completed. Of course the direction could be negative as well. When I bought a handful of Nivmagus Elementals, I was already fending off losses by the time the cards arrived. It’s an added risk associated with Magic.

Key Takeaway: Buying a speculative card has time implications, and the card's values may be significantly different by the time they arrive in your mailboxes. This is a harsh reality of the game. This is why I always encourage speculators to have an exit strategy in mind – one needs to be incredibly agile when it comes to quick flips.

Many Events Can Change Demand

The last factor I want to discuss which distinguishes the Magic Card Market from the likes of Wall Street lies in non-speculative reasons a card moves in price – namely, when a card actually sees an increase in play.

There are a ton of professional players competing with various deck strategies each week. All it takes is one particular card to receive enough attention to transcend all the “noise” and the snowball can begin. In fact with the case of Gyre Sage, the card doesn’t even have to win a major event. The hype leading up to an event is often enough to move the market. In the case of Gyre Sage, Eric Froehlich did bring it to the Top 4 at this past weekend's Pro Tour.

On Wall Street a company’s stock price cannot be jostled so easily. Day to day fluctuations are inevitable, but it’s relatively infrequent for a company’s price to drift significantly away from Wall Streets norm. And when we start talking 200% increases in one week, we are truly talking very rare types of news that may do the same for a company. Usually this occurs in the form of an acquisition. Only very few, rare cases would exist. In Magic, 200% shifts are not only fairly regular, but they can also be triggered by a multitude of sources. (chart from mtgstocks.com)

Key Takeaway: Agility is absolutely critical. Additionally, MTG speculators really need to keep their fingers on the pulse of the market. If you don’t want to check and read articles daily, then I wouldn’t recommend speculating on hot targets like Gyre Sage. To play this game requires an acute awareness of the MTG community’s overall mindset.

MTG Speculation – A Beast All On Its Own

It seems like a weekly occurrence that we’re watching particular cards double or even triple in price. The mtgstocks.com interests tool does a great job capturing significant market movements. With drastic price jumps like these, we start to see the parallel between MTG Finance and Wall Street break down.

The factors for this breakdown are worth keeping in mind because it helps establish expectations for what can and cannot happen. As long as we’re dealing with physical cards, minimum transaction times, and many sources that can affect demand, we will continue to watch this market evolve more rapidly than ever. Technology has been a major enabler for the accelerating dynamics, and I look forward to observing what changes will come down the pipeline in the future.

I’ve already touched upon some recent price spikes in this article. But there are also others worth making a note of. Some may surprise you.

5 thoughts on “Insider: How MTG Finance Differs From Wall Street”