Well, the Pro Tour is behind us, and what a sweet event it was. In my opinion, WotC has really stepped up the live coverage and I was impressed. With this new information I want to take a look at where Standard will go from here. First let’s look at the decks that came out of the event.

WotC posted a list of all decks that earned 18 match points or more, during the standard portion of the Pro Tour, which is the equivalent of 6-4 or better.

First on the list is Jund Midrange, quite a few people played it at the Pro Tour, and two copies made it into the top 8. Given so many players were playing it, this doesn’t surpise me. As a deck that was known to exist before the Pro Tour, I’m a bit surprised it performed as well as it did. While the decks vary quite a bit, they all feature Thragtusk, Olivia Voldaren and Huntmaster of the Fells // Ravager of the Fells. In my opinion, none of those are great targets already sitting at high prices, but Abrupt Decay is a card I can get behind right now, and I’ll be talking more about that later.

There was one player (as far as I know) playing a Jund Aggro list. After watching a bit of his matches, the deck had some shaky mana for an aggro deck, but was quite effective. Featuring cards like Experiment One, Falkenrath Aristocrat, Flinthoof Boar and Strangleroot Geist, the efficiency of the creatures was clearly the focus. Before the Pro Tour, I suggested picking up Flinthoof Boars, and they haven’t moved much yet, but still have plenty of room to move up in price, especially once Standard season rolls around this Summer. I’m also considering picking up some copies of Experiment One. I had always felt this was simply a better card than Gyre Sage, and I expect the more aggressive decks to play this card rather than the slower Sage.

A huge number of Esper Control decks are found on this list. A majority of the ChannelFireball team was on the deck, as well as a handful of similar lists from other teams. Nephalia Drownyard was a 3 or 4 of in these decks, while the creatures varied quite a bit from list to list. Some played Augur of Bolas, some played Restoration Angel, and some, suprisingly, omitted Snapcaster Mage. Drownyard has crept up about 50% on TCG player mid pricing since I started talking about this deck a while back, and I’d expect that to continue now that this deck has shown some success. There’s no reason this shouldn’t be a $3 card when Standard season comes. I’d also like to see these decks play Mutilate, but the current builds certainly won’t support it. 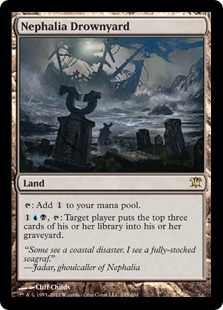 After winning in the Top 8, the “Aristocrats” deck will certainly get a lot of press. It’s key rares are Champion of the Parish, Boros Reckoner and Falkenrath Aristocrat. I find this deck to be a metagame choice, and otherwise a bit clunky. People are going to have to stop playing Searing Spear as their removal in a format flooded with Boros Reckoners, and something will have to give. I expect that if Abrupt Decay starts seeing more play, this deck’s sole threat becomes Falkenrath Aristocrat. I do think it says something that the White human shell containing Champion was strong enough to support a R/B Vampire, that future iterations of human decks will be around for the remainder of the season and into PTQ summer. I’m going to continue to hold my Champions, although I’ve been beginning to trade them out at a profit.

Conley Woods piloted a Mono Black (splash Red) control brew featuring 4x Griselbrand and 4x Mutilate, all fueled by Crypt Ghast. On Sunday at my local Standard tournament, everyone was asking me for Mutilates becase they knew I had been stocking up. I was able to dump 2 sets of these at $14/set. This covered my cost on the other 3 sets I have of these, and I plan to hold these a bit longer because I think it has potential to go higher. Crypt Ghast is an interesting card, and I’m not sure what to think of it. It’s TCGplayer Mid is still under $3, and it certainly has a powerful effect and will grace Commander games at a minimum. However, I’m unsure if this specific deck will garner enough attention to shoot the card up a bit, or if it will find a home in a different deck. I’m tempted to pick up one set just to not miss out on this one.

There were a few other decks that made the 18+ list, but none that have huge impact on the format in my opinion. They were either known existing decks, or slight variations on decks from previous formats. I do think one thing is evident, that Boros Reckoner will define this format, and that means more to how people will build decks than anything else. There are some removal spells that just laugh at a card like Reckoner. Victim of Night, Abrupt Decay and non-damage sweepers. I expect the control decks to adopt this removal and really shut these aggro and midrange decks down for a while. I dont know if the Esper decks can afford to splash green, or if they simply become more black focused to cast Victim and possibly pick up Mutilate along the way. Sever the Bloodline is a more splashable option, while slower does have the potential for big blowouts, and even Evil Twin is an interesting answer to the Reckoner.

What are other was the format can shift to deal with Reckoners? Is there something other than removal that will trump him?