I feel like I've been talking about this deck forever, but my list keeps changing and I keep learning new things about playing it and how to combat the Standard format at large. Last week I was on a Strangleroot Geist deck and I was insistent on jamming Thundermaw Hellkites to combat the menace of Junk Reanimator. In the short span of time between then and now the presence of Junk has lead to a metagame that has been ripe for Naya Blitz to take over- both in terms of being played heavily and actually posting good numbers.

What I've learned from playing against Blitz is that attacking them is foolish and that blocking is sub-optimal to removal. Frankly, Strangleroot Geist was embarrassing. In my previous incarnation of the deck I had been playing Restoration Angel, which was very good against Blitz but ultimately eschewed for being worse than Ghor-Clan Rampager against Junk. At some point last week, presumably when I was delirious from lack of sleep I had the idea to straight swap out Geist for Angel and jam eight four drops. I spent a lot of time thinking "this can't be right" before landing on an exact list but since I've started battling with Angel and Rampager I've put up better results than any previous incarnation of the deck. I suppose this would be a good time to take a look at said list:

For this incarnation I've elected to add Kessig Wolf Run as a spell. It was previously very awkward with Strangleroot Geist and Boros Reckoner in the deck even as a spell considering that it was basically an expensive Rancor, but it is capable of dealing tons of damage out of nowhere with Restoration Angel and is another awesome way to break through Angel of Serenity. It's still awkward with Reckoner, but the one has proven good thus far. We might look land heavy but this is a Ryan Overturf deck and that shouldn't be surprising.

The slot that I'm still trying to figure out is Thragtusk. I wanted the slot to be a creature to increase my odds with Domri while also being something that performs well with against aggressive decks to compensate for the fact that three of my Pillar of Flames are in the sideboard, but costing five has proven to matter more than being Thragtusk against the speed of Naya Blitz. At that point the rest of our deck has beaten or lost to them on its own merits. It is very good to have against Monored/RG aggro and other Thragtusk decks and it makes our Restoration Angels more valuable, but it might end up being sent to the sideboard. I'm considering a Garruk, Primal Hunter over one of them and I will probably be testing that in the near future.

That out of the way, let's talk about some matchups and a few things that I've learned from battling.

If you've been keeping up with Brian Kibler's progression with his own Domri deck then you've heard him say about one thousand times that missing with Domri's +1 can be devastating. He's not entirely off, but the solution that I've found has been just to -2 as much as possible.

The thing about Domri is that his emblem, while insane, often shouldn't be your primary game plan. There are lots of thing from Thundermaw Hellkite to Detention Sphere that can undo all your hard work of plus-ing him, and it's then that having missed earlier becomes truly problematic. From testing I've found that using Domri to Pit Fight, plus, and then Pit Fight again will matter a lot more than a few plusses in any matchup where things to fight are presented. A chance at a card and an absurd endgame is really tempting, but knowing when to grab your value while it's on the table will win you way more games in my experience. That's a big part of why having Strangleroot Geist wasn't cutting it in my deck- you need things that can fight with creatures that matter, and that means having creatures that at their base can at least tangle with a Frontline Medic.

Of course, there are decks that make Pit Fighting with Domri an unviable option- namely decks without (m)any creatures. Fortunately for the Domri player these decks tend to be very bad at interacting with Domri, which makes building to an emblem much more likely! One thing to keep in mind is that most decks that don't present good opportunities to -2 are Azorius Charm decks. It's very important in these matchups to wait until your second main phase to activation your Domri in case they have Charm to ensure that you get your card. It's a small thing and it might be obvious but I think it's worth mentioning.

Now lets get down to brass tacks. How does this deck fare versus popular decks and what are you doing against them?

Their deck is more or less a pile of cards you don't care much about, Mayor of Avabruck and Frontline Medic. You're going to spend a lot of time blocking against them, and in the early turns I advise just not attacking at all to play around Lightning Mauler, but when it comes to Mayor and Medic you'll need a removal spell or you're going to get overwhelmed.

I streamed a daily the other day (you can find the video here) and played against Blitz three times. I ended up going 2-1 against the deck and if you watch the matches it seems clear to me that rounds one and two were very easy wins for me and that round four was just a case of them drawing dramatically better than I did.

A few blockers, removal spells and some patience and this matchup is easily on the favorable side.

This is one of those matchups where you board into four Domri Rades post-board. You almost never get to fight but they don't interact with him well and they can't possibly beat an emblem ever.

Play around Supreme Verdict and let them one-for-one you as they will. All of your monsters are huge and eventually they will die. I've won when my Esper opponent has resolved as many as three Sphinx's Revelations. Their endgame looks much better than yours on paper but if you play in a way where you always have another threat in hand you will find that they ultimately succumb to your aggression in the long game. Don't get greedy!

A quick note on this matchup and something that I totally blanked on while streaming is that Boros Charm (which really should be in your sideboard) + Ghor-Clan Rampager generates more than eight extra damage. Whoops!

Your matchups against Jund and Bant control are going to be very similar, if worse, than against Esper. Don't overcommit into Supreme Verdict/Bonfire of the Damned and Rampage wisely. The major difference in these matchups is that your Domri will be able to (and should) fight more and that you don't want to cast your Loxodon Smiters from the getgo against Jund to play around Rakdos's Return.

Unlike against Esper, Junk will kill you in the long game better than you will kill them. Restoration Angel has proven very strong against Junk in that their Thragtusks can't block it and that it can leave you with two creatures on board when they make an Angel of Serenity.

Don't throw away creatures in combat to Thragtusk when they're just going to Unburial Rites you, don't waste Selesnya Charm on Thragtusk if you can't beat a Craterhoof Behemoth or an Angel of Serenity and don't use Ghor-Clan Ramger just to push through damage against something like a chumping Lingering Souls token unless you see a clear endgame from it.

I don't have a good read on exactly how good or bad this matchup is because I frequently see it as a route in one direction or the other. Player competence and deckbuilding decisions matter a lot, but this matchup is often just a demonstration of the swingy nature of Standard.

This is our nightmare matchup. Lingering Souls + either Aristocrat (God forbid both) is a sizeable beating against us and I really don't know what to do to crack this matchup. If anybody can give any advice on beating them I will gladly take it! In my experience they just play their spells and you die a painful death. If this deck becomes very popular I would absolutely recommend moving off my deck.

There are still a lot of zonky decks showing up in Standard and thus far I haven't felt worse than 50-50 against anything fringe I've played against other than Humanimator, which is abysmal game one and contingent on drawing Rest in Peace (see- still unfavored) in games two and three. That said, Humanimator has largely been hated out unintentionally be people trying to beat Junk and isn't a major concern of mine.

And as for the other decks? I'm not too concerned: 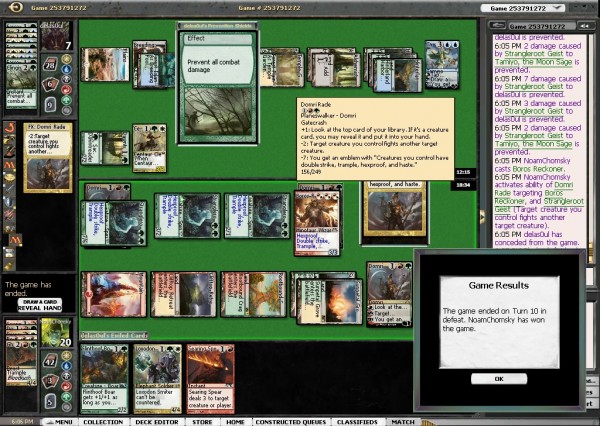 Currently I intend to bring something very close to this list to the SCG Open in Milwaukee and if the metagame continues to look as it has then I will likely be battling with it in local PTQs. Questions? Concerns? Leave a comment!