Yesterday morning I participated in a local Prerelease event for Dragon’s Maze. Because this was the only Prerelease I could attend from this entire block, I was excited to finally get my chance to play with Guild Packs and the whole nine yards. After reading about how powerful Orzhov was, I chose Orzhov/Azorius and got to work.

Turns out picking Orzhov/Azorius and then opening two Turn // Burn and three Punish the Enemy forces you to make some awkward decisions. I ended up Blue/White/Red splashing Black and, while color fixing was usually not too bad, the deck just did not synergize well. Disappointingly, I proceeded to 0-2 drop – about average for me at Prereleases.

I should stick with Modern.

When I got home, my day started picking up. In the mail came a couple big cards I ordered. And then I found some consolation in seeing this picture (source): 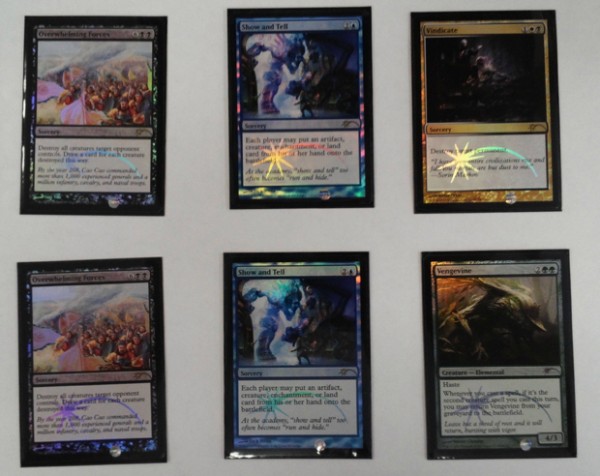 Talk about spoilers! While Vengevine is less than exciting, the other reprints deserve some attention. After all, we have another rumored P3K reprint now in Overwhelming Forces!

Should these rumors be true, we should consider past examples in order to predict possible implications of these reprints on prices. Overwhelming Forces is a stead $130 card, but this reprint can have some serious impact. Don’t believe me? Have a look at what happened the last time a rumored P3K reprint surfaced:

Imperial Recruiter was happily rising in price over time and ultimately peaked near $350 thanks to its popularity in Legacy. Reprint rumors began and the price shed over $75 in a few short months. While the original P3K version isn’t in danger of truly collapsing, the reprint should increase supply of the Advisor enough to have a permanent impact on price. By investigating the past, I would predict Overwhelming Forces to drop by a similar percentage in the next couple months – if you aren’t attached to the original version artwork, you may be best off selling now.

If you’re like me, the above analysis isn’t so useful since I don’t own any Overwhelming Forces. So let’s look at the two cards nearer and dearer to our hearts: Vindicate and Show and Tell.

Our best approach here is to investigate what has happened historically when solid Legacy staples were reprinted as Judge Foils. How about using Karakas and Noble Hierarch as arbitrary basis cards, since both were done recently and mtgstocks.com should have sufficient data to highlight impact?

It would appear based on the chart for Karakas that the increase in Magic’s popularity has more than compensated for the Judge printing of Karakas. The card is a few bucks off its peak, but the impact has been negligible. I would have expected that the limited supply of this Legendary Land would surely have meant that any reprint would hurt prices. Perhaps not?

At least the Judge Foil version retails for $20 less than the original version. It seems in this case the original printing was hardly impacted at all, and that the new version enters the market a little below the original.

The trend for Noble Hierarch doesn’t seem too different:

Like many price charts, the value of Noble Hierarch has been steadily on the rise since Return to Ravnica was released. As far as the original copy’s price is concerned, the Judge Foil had no impact. In this case the Judge Foil version retails for $10 more than the original printing of the Human Druid. This might be because the original frame and artwork is so classy.

In rapid fire form, here are my predictions for the spoiled Judge Foil cards:

Back To My Prerelease Day

By the time last night rolled around I was mostly over my painful defeat at the local Prerelease. I tried to return to an area of strength: finding deals on MOTL and eBay. That’s when I noticed that people have already begun listing their Dragon’s Maze cards. Overall, this is a smart move.

Personally, the only valuable card I opened at the Prerelease was a Godless Shrine, and I have no intent on selling it yet. The card had been on a steady decline since release, but I’m beginning to think all Shock Lands have finally bottomed. They all have a similar chart shape, dropping from release to the present but slowly flattening out in the past couple weeks.

This would be a good time to remind everyone how previous rare lands of Standard have also followed this trend. Scars of Mirrodin Dual Lands took off once they became scarce in trade binders, and Innistrad Duals tripled in price once Scars block rotated out of Standard. Shock Lands should be no exception, and with their Modern/EDH playability, these cards should be solid investments in time. I'm looking to acquire readily in trades, and I am even trying to buy here and there if the price is right.

As for Dragon’s Maze cards, are there any worth keeping at the moment? Well, despite hearing how infrequently people opened Ral Zarek, I still think you should sell him the moment you touch him. Looking at his price chart, he’s already been on a decline and I see that continuing in the short term.

In order to maintain that price tag, he’s going to need to see solid play in Standard. Even Liliana of the Veil had a tough time remaining above $30 when she was initially printed, and she even saw multi-format play!

In fact, almost every Dragon’s Maze card will have a price chart like the one above. One exception I’d like to point out here (and it’s the only card I’m considering) is Sire of Insanity:

This card has been on a rampage after sitting at two bucks for days. It’s like all of a sudden people realized how good this card is, especially against control decks running Sphinxs Revelation and sitting on various counterspells. I don’t know if going deep at the new $5 price tag is right, but buying copies at the older price tag sure seems solid. Wish I had pre-ordered these when I had the chance, but now there is increased risk. Should this card become a dud, he will drop to $2 as quickly as he rose to $5. If I opened any at the Prerelease, I wouldn’t be selling them just yet.

Well, first of all I learned how rusty I am at playing Magic. It seems that focusing my MTG time on the finance side (and, you know, having a baby) really inhibits my abilities in playing the game. I still enjoy it though and I’ll still play whenever I get a chance.

Second of all, I saw the Judge Promo picture and I’m not too concerned about the implication. Unless you have copies of Overwhelming Forces lying around, I wouldn’t worry about these reprints. Personally, I don’t think Show and Tell will budge in price unless it’s banned in Legacy. The Judge Promo should have no impact on Vindicate as well.

Finally, as you return home from your Prerelease weekend, please keep in mind the likelihood of Dragon’s Maze's prices dropping. So many cards are inflated in price at this time, and it is often the wrong move to sit on them. The only exceptions for me are the Shock Lands and Sire of Insanity. The rest I’m more than happy to trade away or sell if it’s worthwhile. You’ll have plenty of time to acquire these more cheaply in a few weeks.